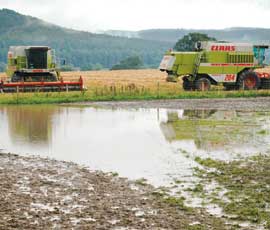 The Met Office has confirmed that 2012 has seen the wettest June since records began in 1910.

Double the average amount of rain fell across the UK over the month. The final UK total was 145.3mm beating the previous high of 136.2mm set in 2007.

The weather has prompted quality warnings ahead of harvest and left livestock farmers with huge areas of silage ground uncut.

In Lancashire, contractor Harry Wilson, has a huge backlog of late spring work including 1,200 acres of first cut silage.

Mr Wilson, the 2010 Farmers Weekly Awards Contractor of the Year, said: “We’re passed the stage of trying to catch-up, it’s now going to be a salvage situation.

“That means there will be serious repercussions over winter forage – both quantity and quality.”

Grass quality is now deteriorating rapidly in areas that have seen daily rainfall for more than two months with some parts of the north-west receiving a month’s rainfall in 24 hours.

Mr Wilson said: “A lot of herds are now back inside and eating their way into silage stocks. Farms where we managed to take first-cut silage have fields full of potential second cut grass that should already be in the clamp but it’s soaking wet and has had hardly any sunshine.

“There appears to be no long-term prospect of any improvement in these weather conditions and even if it stops raining the ground is completely sodden,” Mr Wilson said.

Another Lancashire farmer told Farmers Weekly that his cows were back inside on full winter rations while 100 acres of grazing land was under water.

In Scotland beef farmer Robert Neill, from Upper Nisbet in the Borders said the weather had been a “nightmare”.

“We are currently stuck halfway through our first cut.

“We’ve already had two tractors and trailers stuck because of the wet conditions. It’s a very start-stop job. The quality is going poorer, but we have got lots of it.”

How have you been affected by the wet weather?