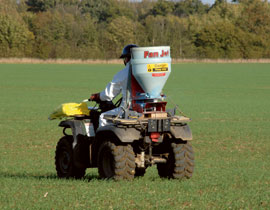 Levels of metaldehyde in surface waters are the lowest recorded since monitoring began in 2007, according to 14 water companies across the UK.

The fall is attributed to the continuing work of the Metaldehyde Stewardship Group in encouraging best application practice, as well as dry autumns and winters, which have reduced the need for slug control.

“We are pleased to see the overall drop in the levels of metaldehyde in surface water across the country and the contamination situation is much improved,” said Robin Price, regional quality manager for Anglian Water Services.

The danger of high levels of metaldehyde, the molluscide used in 80% of slug pellets, would be a failure to meet EU safe drinking standards. Should this happen its use could be restricted, or removed. Replacing methaldehyde with another active could double the industry’s slug control bill, adding between £15m-28m a year to growers’ costs.

The new findings are good news. It demonstrates that growers are following best practice and seeking ways – such as lower rates of active ingredients, alternative actives such as methiocarb and increased care during application – to avoid contaminating watercourses.

Get Pelletwise is an industry-led campaign set up In 2009 in response to traces of metaldehyde being found in catchments used for water extraction. Best practice, including machinery settings, dose rates and integrated methods of controlling slugs are available on the Pelletwise website.