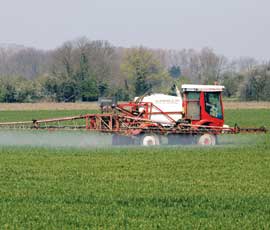 Yellow rust could be massive in 2012, independent agronomist Andrew Blazey of Prime Agriculture, covering Suffolk, Essex and Cambridgeshire, says. “Crops are also more forward than usual so the situation is currently high risk and potentially much worse than last year.

“It is currently easy to find both brown and yellow rust in susceptible varieties – probably two or three, if not more, of all varieties grown,” says Mr Blazey.

In Lincolnshire, Dick Neale of Hutchinsons has seen brown rust, but he is far more concerned with yellow rust infection.

“Brown rust has only occurred as a single infection, in 4-5% of plants across any one field,” he says. “Yellow rust is far more widespread and streaks can be found on the leaves of plants already.

“A timely T0 application will be essential and much more effective than waiting until T1; we will recommend a rust-active triazole mixed with chlorothalonil.”

In some cases, levels are high enough to consider an earlier treatment before the usual fungicide programme begins, says Tim Bullock of Agrovista, covering Gloucestershire and Wiltshire, particularly where mildew has also been a problem.

“This is the worst incidence of rust that I have seen at this time of year, and is irrespective of resistance scores with both brown and yellow,” he says.

“Where mildew is present I’m considering spraying early with Centaur (cyproconazole), but in the meantime some cold weather would help.”

In contrast to this, Nick Brown of ProCam in Berkshire, Buckinghamshire and Oxfordshire urges caution when considering earlier treatment. He believes many wheat crops are too thick and could carry the disease until spray programmes start in the spring.

“I have seen limited cases of yellow rust but brown rust is widespread in my area,” he says. “It is still far too early to consider treatment and some crops won’t be hurt by losing a few tillers.