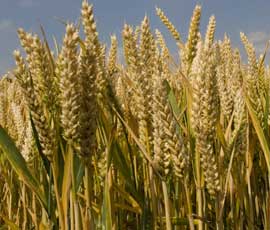 The future of GM crops in Britain will be a key subject for discussion during a meeting between government ministers and key leaders from agriculture and science.

Science minister David Willetts and DEFRA minister Lord Taylor, of Holbeach, will meet key industry leaders on Tuesday (26 June) to discuss ‘Going for Growth‘ – a new report by the Agricultural Biotechnology Council (ABC), which calls for a “UK strategy for growth in the agricultural technology sector”.

The roundtable discussion will ask whether the UK needs such a strategy to address global food security sustainably and to keep pace with growing competition from emerging markets.

The report has been backed by the NFU, National Institute of Agricultural Botany (NIAB) and public research institutes including Rothamsted Research in Harpenden and the John Innes Centre in Norwich.

Mr Willetts said: “Food security is a global challenge that is increasing as the population grows and climate change threatens agricultural areas.

“Britain has traditionally been at the forefront of research. We continue to be committed to finding ways of producing food efficiently and advocating the role of agricultural technology to tackle the problem.”

ABC chair Julian Little said: “British science is one of our great national assets and agriculture is a growth area for the UK economy. Innovations in agricultural science are taking place at British institutes right now – both advanced, including GM, and conventional breeding techniques.

“From soya beans in Brazil to maize in Spain and papaya in Hawaii to oilseed rape in Australia, farmers around the world are using such innovations to improve the reliability and returns of crop production and to produce more food more sustainably.

“Encouraging British research and providing farmers access to all of these new technologies represents an exciting growth potential for the UK economy, and is a key tool to help them to compete in the global agricultural market.”

NFU president Peter Kendall said British farmers needed access to all available technologies to stay competitive in the global market, and to protect and enhance the millions of hectares of British countryside.

“A forward-thinking strategy for agricultural technology research is essential to help UK farmers continue to meet the future food and farming challenge,” he added.