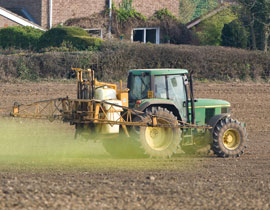 A French court has found Monsanto guilty of the chemical poisoning of a French farmer – a judgment that could strengthen other health claims against pesticides.

Grain grower Paul Francois, 47, inhaled Monsanto’s Lasso weed killer when he opened up a sprayer in 2004.

He became nauseated, began stuttering and suffered dizziness, headaches and muscular aches, rendering him unable to work for a year.

Mr Francois blamed the US agri-business giant for not providing adequate warnings on the product label.

“Monsanto is responsible for Paul Francois’s suffering after he inhaled the Lasso product… and must entirely compensate him,” said the judgment from the court in Lyon, which ordered an expert opinion of Francois’s losses to establish the amount of damages.

“It is a historic decision insofar as it is the first time that a (pesticide) maker is found guilty of such a poisoning,” François Lafforgue, Mr Francois’s lawyer, told Reuters.

Monsanto was accused of keeping Lasso on the French market until 2007 despite bans of the product in Canada, Britain and Belgium.

The company also failed to say what its product contained on the label or warn of the risks of inhalation or advise the user to wear a mask, Mr Lafforgue said.

Monsanto’s lawyer Jean-Philippe Delsart had argued that there was no proof of poisoning as the farmer’s symptoms did not appear until months after the inhalation.

Monsanto said it was disappointed by the ruling and would examine whether to appeal the judgment.

“Monsanto always considered that there were not sufficient elements to establish a causal relationship between Paul Francois’s symptoms and a potential poisoning,” said Mr Delsart.

Mr Francois and other farmers suffering from illness set up an association last year to make a case that their health problems should be linked to their use of crop protection products.

Lasso, a pre-emergent soil-applied herbicide that has been used since the 1960s to control grasses and broadleaf weeds in farm fields, was banned in France in 2007 following an EU directive after the product had already been withdrawn in some other countries.

Lasso was once a top-selling herbicide, but it has gradually lost popularity. Critics say several studies have shown links to a range of health problems.

The company markets it in conjunction with its biotech herbicide-tolerant Roundup Ready crops. The Roundup Ready maize, soya beans, cotton and other crops do not die when sprayed directly with the herbicide, a trait that has made them extremely popular with US farmers.

But farmers are now being encouraged to use more and different kinds of chemicals again as Roundup loses its effectiveness to a rise of “super weeds” that are resistant to the substance.

Previous health claims from farmers have foundered because of the difficulty to establish clear links between illnesses and exposure to pesticides.

However, the Francois claim might have been easier to argue than others because he could pinpoint a specific incident – inhaling the Lasso when cleaning the tank of his crop sprayer – whereas fellow farmers are trying to show accumulated effects from various products.