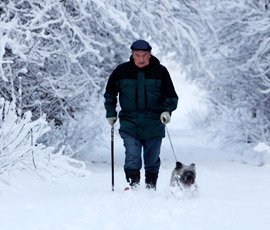 Freezing conditions arrived for farmers in Scotland over the weekend as heavy snow and ice caused disruptions.

The wet conditions of November, the second warmest since records began in 1910, gave way to snow for many farmers across the country overnight Sunday (4 December).

Arable farmer Cameron Barclay, of Sunnyside Farm, in Inverurie, Aberdeenshire, said: “We have had about an inch of snow but there is plenty of ice about.

“It’s about -2C here at the moment so if we do get more snow, it could get worse. But conditions are nowhere near as bad as those we experienced last year.”

There has been widespread snowfall across Scotland of 1-3cm and the highest recorded amount was 12cm at Eskdalemuir, Dumfriesshire, according the Met Office.

A Met Office spokesman warned farmers that conditions were likely worsen over the next 48 hours.

“We are expecting to see more snow over the next 24 to 48 hours,” confirmed the spokesman.

As a result, the Met Office has issued severe weather warnings of snow and ice for Tuesday and Wednesday (6-7 December) for most of Scotland, Northern Ireland, much of northern England and parts of the midlands.