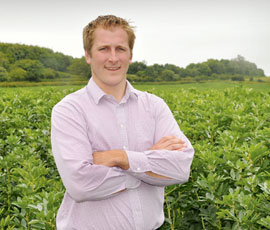 When Edd Banks returned from Harper Adams University to his family’s Cambridgeshire farm in 2004, he began to realise that post-emergence herbicides alone were no longer controlling blackgrass.

The 1,100ha of chalky clay loams at Manor Farm, Harlton – over three-quarters of which grows winter wheat and oilseed rape – were badly infested with the weed, most of which tests eventually showed was herbicide-resistant.

“It was those tests, in 2008, that convinced me that we needed to change our practices,” says Mr Banks, a former Farmers Weekly Barometer farmer and this year’s Syngenta Grass Weed Manager of the Year. “The results were RR to Atlantis and Laser and RRR to Axial, Lexus and Topik.”

So an alternative strategy was developed based on discussions with independent agronomist David Boothroyd and trying various methods to see which worked best.

“We’ve just adjusted our systems in a whole farm approach because no single method works on its own.”

The revamp seems to be succeeding with fields becoming noticeably cleaner.

“We haven’t done any weed counts, but the picture is so much better, year-on-year. Some fields are now at the point where we shouldn’t need any post-emergence herbicides.”

Sowing spring beans after stale seed-beds behind his worst-infested second wheats was a key move, and to achieve a blackgrass-competitive crop he is prepared to drill in January frosts.


Drilling wheat on badly infested land as late as he dares is proving its worth. “We’ve done it for three years. Last year our latest drilling was on 28 November.” His 8m Vaderstad Rapid with a 2t seed hopper hauled by a Case Quadtrac 380 helps make the most of weather windows.

Stale seed-beds are vital, he believes. “We try especially to smash clods which could break down over winter and release weed seeds to germinate in spring.”

To avoid returning buried blackgrass seeds to the surface Mr Banks now relies mostly on minimum tillage, ploughing only one year in six ahead of the beans.

“In 2006 we purchased a 6m Vaderstad TopDown, and to complete the system in 2011 we bought a 6m Vaderstad Carrier. This means the Topdown can do the deeper cultivations while removing most compaction and mixing crop residue more thoroughly.”

“Our normal system consists of one TopDown pass as soon as the crop’s been harvested. We then leave it for the weeds to germinate before doing one pass with the Carrier to make a fine, consolidated seed-bed before spraying off with pre-drilling glyphosate.

“It’s very clear, from examples like patches of poor establishment or blocked coulters, that if you have low competition, blackgrass thrives,” he adds. And his experiments have highlighted the value of a higher wheat seed rate in suppressing the weed. “If necessary I’ll increase it by up to 100% more than designated.

“If you increase the rate, say, from 150kg/ha to 250kg/ha using home-saved seed that’s an extra cost of £18.30/ha at current prices. But because of the increased competition there’s less autumn blackgrass germination, which the pre-emergences should hopefully take out, and little or no spring germination. That can save applying Atlantis at £30-35/ha.” 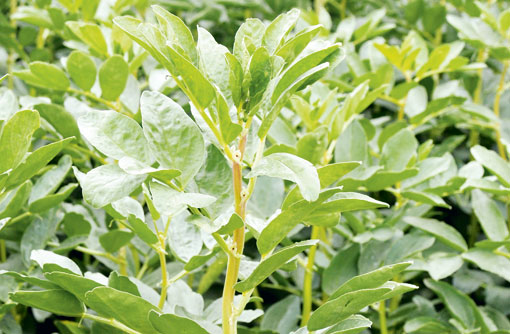 In the past Cordiale was his choice for later drilled milling wheat; now it is Gallant, which he says has competed best with blackgrass in Syngenta trials.

Pre-emergence herbicides – Avadex followed by full rates of Crystal, Defy or Liberator – are his main chemical controls. “I rely on advice from David as well as Sam Vaughan, another independent agronomist, who do weekly crop walks.”

For pre-emergence spraying he uses both forward- and backward-facing Defy nozzles. “We set them all forward-facing for post-emergence treatments as trials show this gives the best control.”

His Knight 2050 self-propelled 36m sprayer with 5,000-litre tank is driven no faster than 12kph with the boom 50cm above the crop/soil. “We change to Amistar nozzles after T0 for better canopy penetration.”

He employs GPS to enhance drilling and spraying accuracy, and plans to use auto-steering on the sprayer this autumn. “We’ve been using RTK for two years, supplied by RTK Farming which covers East Anglia. The reliability is fantastic so we never lose the correction signal.”

“We can spray glyphosate between crop rows using hooded nozzles to create sterile strips. At the same time the sprayer applies the normal prescribed chemical on the row. This reduces herbicide costs by 40-70% as well as the blackgrass population.

“The rape is drilled, like our sugar beet, at 50cm row spacing behind a 12-leg, 6m subsoiler with low disturbance legs to ensure fewer weed seeds are stimulated to germinate. We then put fertiliser, slug pellets and seed all in the row, leaving the gap between to be sprayed off.”

“It’s very clear, from examples like patches of poor establishment or blocked coulters, that if you have low competition, blackgrass thrives.”
Edd Banks

To achieve cleaner fields long-term, Mr Banks is prepared to cut heavily infested cereals early for wholecrop silage, and to destroy bad patches by spraying. “We try not to do this, but we will if we need to.”

He is sceptical about blackgrass dormancy forecasts. “I don’t use them much as I think each farm is different. We’ve had huge germination levels when we were told the seed would be dormant.”

Overall the strategy revamp has eased grassweed pressure and saved costs, he believes.

Since 2008 the Quadtrac’s annual hours have fallen by 27%, and the reduction in herbicide costs, due to the band sprayer on the rape, should be £34/ha when spraying 20cm bands of glyphosate, he says. “If we can use 30cm bands, the saving will be £51/ha.”