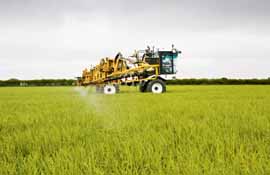 Using a multi-site protectant fungicide with a low risk of resistance developing to it in septoria could slow the development of such resistance in high risk groups, including the new SDHI fungicides, experts suggested at a Makhteshim-Agan press briefing.

Resistance to SDHI fungicides in some pathogens had already been detected in the field or created in the laboratory, Jonathan Blake, an ADAS plant pathologist said.

That included a septoria strain created in the laboratory by exposing the fungus to ultra violet light, although Bill Clark, director of Broom’s Barn research station, pointed out that didn’t mean that strain would occur in the field.

“But we are worried about resistance developing to them, and they do need to be managed for resistance, and used in mixtures.”

Modelling work conducted by Rothamsted’s Frank van den Bosch and ADAS’s Neil Paveley suggested that mixing fungicides with a low risk of fungicide resistance developing to them with higher risk ones could extend the latter’s life span, said Mr Blake.

“It is impossible to say when SDHI resistance will occur, but the model, which was based on data generated as resistance developed to strobilurins, suggests that using even a low dose of a low risk product, such as chlorothalonil, could double the life of the high risk partner.”


It meant for resistance management using a multi-site protectant, such as chlorothalonil or Makhteshim’s folpet would be entirely positive, he said. “But the problem is that not in every case are there positive benefits in terms of efficacy. SDHI and triazole fungicide mixtures are themselves highly effective, of course.”

There had also been negative efficacy effects from mixing SDHI fungicides with chlorothalonil, particularly Bayer CropScience’s Aviator Xpro (bixafen + prothioconazole), such that the firm did not back the mixture’s use, he pointed out.

There had been no evidence of any antagonism in trials with Makhteshim’s rival multi-site fungicide, folpet, said Makhteshim’s Stuart Hill, although Bayer will not back the mix until it has more data.

Some of the concern over antagonism has been based on the suggestion chlorothalonil affects triazole uptake into the leaf, and Mr Hill presented data that indicated greater epoxiconazole uptake when applied in tank mix with folpet than chlorothalonil.

“I think that is where folpet also gets its extra rust activity.”

In a trial in the bad brown rust year of 2007, using folpet in mix with prothioconazole gave an extra 0.6t/ha over chlorothalonil, he said.