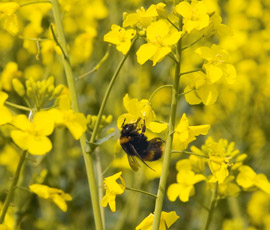 Oilseed rape crop establishment and early season pest control will be a “nightmare” after an EU ban on neonicotinoids, say crop experts.

Due to come into effect on 1 December, the EU’s decision to ban neonicotinoid pesticides is a “catastrophic blow” for farmers which will see them resorting to older chemistry with potentially worse environmental impact for bees.

After this autumn, growers will be forced to switch from neonicotinoid seed treatments to spraying with pyrethroid foliar sprays, such as cypermethrin, to control pests such as virus-carrying aphids and cabbage stem flea beetle.

But for farmers who have problems with crop establishment even multiple sprays of pyrethroids, although they are cheap, are only going to do a “limited job”, he explained.

“In a difficult year, farmers may need as many as four extra sprays. But they don’t work very well and resistance is building in flea beetle in Germany and parts of the UK.”

“We’re still going to try and get the treated seed this autumn,” he said. “We have a real flea beetle problem and losing one of the most precise forms of pesticides means we run the risk of resorting to two cypermethrin sprays.”

Tim Lovett, of the British Beekeepers Association, said it would be extremely difficult to run field trials to see if neonicotinoids were harmful to bees.

“We now expect farmers to use products such as pyrethroids that we know are hazardous to bees,” he added.

The main reasons bee numbers were in decline were poor weather, diseases and the loss of habitat, he said. “We are very concerned about the decision as we cannot point an accusative finger at neonicotinoids, there is a lack of a smoking gun.”

The NFU said the ban would have “catastrophic impacts” for food production and “unintended consequences” for the environment, without any measurable benefits for bee health.

But environmentalists hailed the ban as a “victory for bees”. Friends of the Earth’s Andrew Pendleton said: “This decision is a significant victory for common sense and our beleaguered bee populations.”