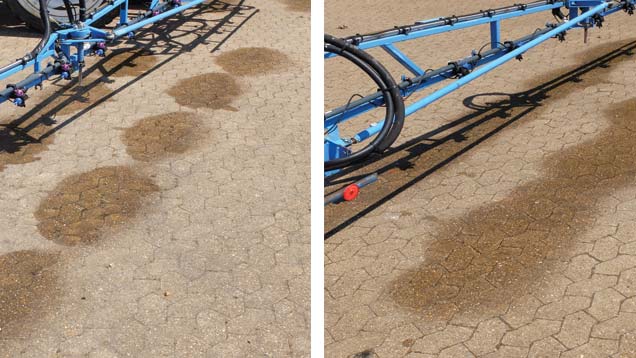 The 'rugby ball' effect of the old Defy nozzle (left) is eliminated with the new 3D version (right).

The new nozzle is an evolution of the company’s popular flat-fan Defy nozzle, designed specifically for applying residual-acting herbicides to soil, although it can be used for other applications.

It will provide better all-round coverage of soil clods and also reduces the finer “drifty” droplets produced in its spray pattern, reducing the risk of off-target contamination.

Farmers Weekly asked two top sprayer operators who have been trialling the new nozzles how they fared this spring.

What sprayer operators are saying…

Former Farm Sprayer Operator of the Year Iain Robertson has been using the Defy 3D on his Bateman RB26 – and has been impressed.

Working at David Foot, near Bincombe, Dorset, Mr Robertson treated about 400ha of forage maize with a post-emergence herbicide this spring and noted excellent coverage and a more uniform droplet spectrum than
other nozzles.

However, it’s the reduction in drift and subsequent increase in the window in which the nozzle can operate effectively that has caught his eye.

“I would usually switch over to an Amistar or Guardian Air when things get drifty, but with the Defy 3D that point is much further down the line than with the previous Defy.

“It is a big step forward, especially if you have a large acreage to cover and it will be my choice this autumn all the way through to the T1 cereal fungicide,” says Mr Robertson.

Arable manager and sprayer operator across 1,600ha in Trowbridge, Wiltshire, Martin Smart has been trialling the Defy 3D this spring spraying season.

Fitting them to his self-propelled Bateman, he has used 3Ds to apply pre- and post-emergence herbicides to spring barley, spring beans and maize and reckons they have done a superb job.

“The old Defy nozzles worked well, but any small gain to improve the efficiency of the spray and give you an edge is welcome.

“I’ve also used them to apply fungicides to cereals in breezy conditions, and found they give better coverage than other nozzles, as well as less drift as the air can move in between the jets,” explains Mr Smart.

The Defy 3D will be available from most nozzle distributors by 21 August. Growers can pre-order by calling Syngenta on 0800 652 4216