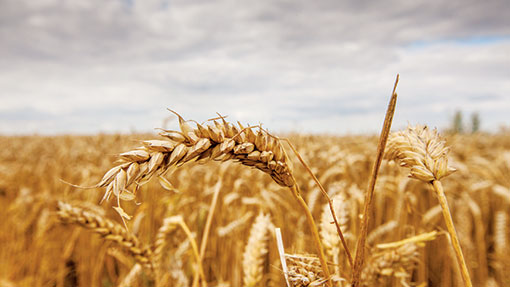 Wheat yields could be increased by up to 10% by breeding for more and heavier grains with a redesigned wheat ear.

Geneticists are working to raise the number of grains per spikelet, increase the amount of these spikelets and also push up the size of the individual grains.

Each spikelet in a wheat ear normally produces about three grains, but by creating a branched spikelet more viable florets, or grains, are possible.

The creation of this mini branch within the spikelet structure could allow up to five grains to develop, although an initial target of four is seen as achievable.

Cristobal Uauy, project leader of wheat genetics at the John Innes Centre in Norwich, is looking at genetic material which could boost grain numbers in the spikelets.

His team are working with an Egyptian wild winter wheat which has this branched spikelet  characteristic to give an extra grain.

“We are looking to make small tweaks to give us one extra grain as if we make too dramatic a move the wheat plant can compensate,” he says.

Moving from three grains to four grains per spikelet could potentially raise yields by a third, but Dr Uauy cautions against too much optimism.

His fear is that boosting the grains per spikelet could produce more but smaller grains, therefore giving no overall benefit, although his early work is promising.

The Egyptian wild wheat has been crossed with the conventional spring wheat variety Paragon and the floret development carefully monitored.

Whether this more open spikelet would attract more disease, such as fusarium, or be more difficult to harvest have still to be established in field trials.

The next priority is to try and increase the number of spikelets in the wheat ear from an average of around 29-30.

Dr Uauy says this is very time consuming work, but the aim is to add another 2 or 3 spikelets per ear to produce a bigger wheat ear and hence boost overall yield.

The final piece of the jigsaw is to increase the size of the grain, and he is examining two old wheat varieties –  small-grained Spark and large-grained Rialto.

He is searching for the genes behind making the grain both wider and longer, and has narrowed his  search down to about 150 genes in the wheat plant which could be responsible for this trait.

One of  the key complications with wheat breeding is that it is a hexaploid plant, meaning it has three sets of gene pairs controlling one particular trait.

Of course, wheat is a very resilient plant and may try to compensate against the changes, so an overall yield increase of 5-10% would be seen as a big progression.

“If we could get a 10% yield advance that would be huge. We are looking to advance yields on several fronts, there is no one silver bullet,” he says.

Geneticists are working towards mapping out the full genome of the wheat plant which could be achieved in two to three years, to match what was done for the human genome over a decade ago.

All this work at generating the wheat germplasm to build towards higher yields is being done with gene markers rather than with the assistance of genetic modification.

One final area which Dr Uauy is looking at is working to keep the grain alive for longer and extend the average 30-35 day period that the grain is filling.

“In our trials, the need to fill the grain is not limited by photosynthesis, so we need to work to keep the grain alive for longer,” he says.

If the grain could be kept alive  2-3 days longer, there could be a big yield impact, says Dr Uauy.

Britain’s biggest farming group Velcourt will be showing some of Dr Uauy’s wheat breeding work on its stand at Cereals 2014. The group, which farms almost 53,000ha, is keen to find out more about the components which make up the final yield.

“Once the breeders have come up with a new wheat variety, we will need to come up with an agronomic system to grow the crop,” says Keith Norman, technical director at Velcourt.