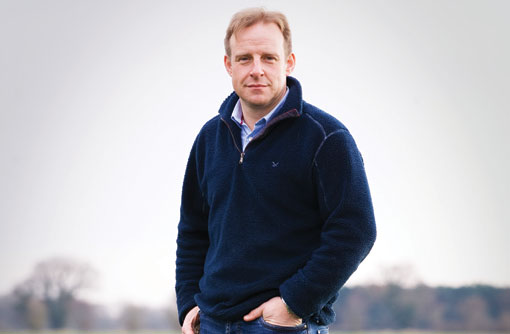 You name it, LF Papworth, a family-run contract farming business led by Kit Papworth, alongside his father, uncle and cousin in North East Norfolk, has probably grown it.

The enterprise owns no land, following a demerger in 2004 when the family’s land holding was split between two sides of the Papworth family.

The current business was set up to contract farm that land, and now has arrangements to farm around 1,800ha in total, involving agreements with more than 20 landowners in the area. Around 80% of the area is irrigable from water sourced from boreholes.

Those arrangements are at the heart of the business, explains Mr Papworth. “They range in size from literally 10 acres to a thousand, and cover every possible permutation. Some are agent-agreed, fully functioning agreements, while others are done just on a handshake. Some are long term, some very new to us. The key to them is what the landowner wants from us to look after them.”

The firm has two directors, Mr Papworth and his cousin Tim. “When we took the business on, Tim specialised in potatoes, fertiliser and cattle, while I specialised in combinable crops, agronomy, sheep and business management.

“But on 14 October 2010, Tim had a very serious accident, so, for the moment, I run the business with my father and uncle, with significant help from my assistant, Stuart Laws.”

Approximately 50% of the area is cereals, which has increased in proportion over the past 10 years. Winter barley is in decline, while the areas of wheat and spring barley are flexible, depending on sugar beet lifting and the conditions after potatoes.

“We have half the area of spring barley this season, just because of a dreadful autumn 2010, and a fantastic one this year.” 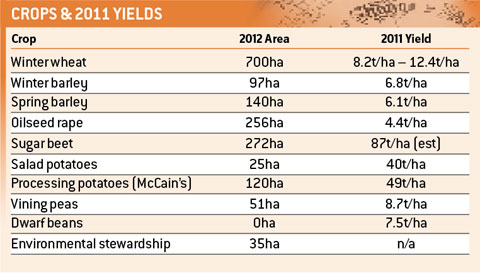 All the wheat is first wheat, with the majority of it feed, delivered using the firm’s own lorry to feed mills in Norfolk and Suffolk. Around 15% of the wheat is in seed crops for a range of breeders. Milling wheat is not grown as the farm struggles to get the premiums required to make it worthwhile, Mr Papworth says.

Drilling begins in the first week of September and continues through to late drilled crops after roots. A wide range of varieties are grown, starting with Claire and Grafton, through to Duxford, Oakley and Horatio. Yields are variable, as might be expected with such a wide range of drilling dates and conditions, but have averaged from a low of 8.6t/ha to 10.5t/ha over the past five years.

“It depends on the conditions after sugar beet and potatoes. We haven’t got strong enough land to grow 11 and 12t/ha crops across the board. It is too light – we always end up with a drought situation somewhere.” 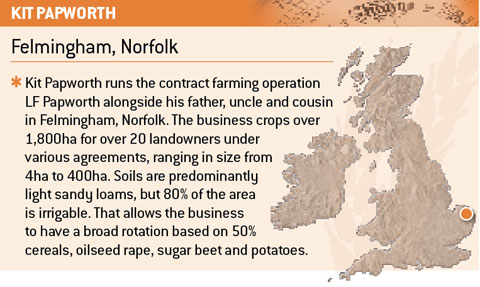 Establishment method is flexible. “As a general rule, we Terradisc after oilseed rape and peas, we use a Sumo Trio after potatoes and early-lifted sugar beet, and we plough after late sugar beet and if conditions are poorer.”

Oilseed rape has been a relative newcomer to the farm, but is increasing at the expense of pulses. “We’ve only grown it for the past five years, and with our broad rotation the land is all practically virgin, so our yields are comparatively high.”

The crop is always drilled with a Horsch drill, and depending on the season and conditions, following either the plough or Sumo. “I firmly believe establishment is 80% of the rape crop, rooting is very important.”

Root crops are a central part of the business. The business grows more than 300ha of sugar beet, and runs the White Cross Sugar beet harvesting co-operative, managed by Mr Papworth’s uncle Jim, which lifts around 880ha of beet with a six-row Holmer.

“The syndicate also delivers over 100,000t of beet into Cantley factory, through combining with another harvesting syndicate.”

Lifting has already finished for this season, in marked contrast to last year, and yields have been “phenomenal”, averaging in excess of 70t/ha. “Some fields have done over 100t/ha, despite missing eight inches of rain last spring.”

The potato enterprise has been simplified since Tim’s accident. “We deal with fewer people and have fewer varieties. I tried to pick out where we had the lowest risk.”

That means around 25% of the area is down to early lifted salad varieties, with larger areas of main crop Saturna that mainly goes to Walkers Crisps via the North Norfolk Potato Group, and Innovator, Maris Piper and Pentland Dell which go to McCain’s. 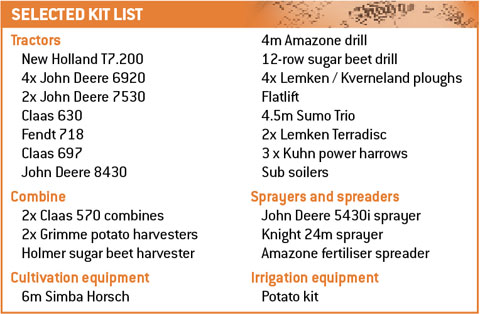 It is not the end of the cropping: dwarf beans, stubble turnips, ryegrass, chicory, vegetable brassicas and daffodils are all being grown or have been in the recent past, he says.

Removing and reducing compaction on the farm is a key focus for Mr Papworth. “It is really important on our light sandy loam land type. As machines got bigger, I think we went through a period where we were not as conscious of compaction as we are these days. The size of machine is putting compaction deeper and deeper and, if we’re not conscious of it, we will have it so deep we cannot get it out with a conventional machine.”

Tackling it starts with avoiding creating it in the first place. “So don’t run machinery around on the land you don’t have to, use wider tyres on tractors and trailers, tracks on machinery – all the simple things.”

But time is also spent with a penetrometer investigating compaction that has been created, with Cambridge University Farm’s Mark Stalham influential. “We have a very good opportunity with our rotation to take it out in both oilseed rape and wheat using either deep sub-soilers, or the Sumo, provided we haven’t put compaction down deeper than 50cm.”

The focus on compaction is having a positive effect on the farm’s yields, he believes, as shown by how the sugar beet came through the dry spring successfully.

But the plans don’t stop there. He is investigating ways of putting lucerne into the rotation, primarily for its effects on compaction. “It will provide us with possible fodder for livestock, but it is very good at reducing and removing compaction because of its very long and strong roots. We have to find a way of introducing it into our rotation.”

That won’t be easy because it needs to be down for 18 months, and would potentially be at the expense of oilseed rape, sugar beet or potato crops.

“It is why we’re not doing it at the moment. It needs to work financially for the farm, and we’re wrestling with how to do that. But we can see its potential.”

This season will see a partial switch to liquid fertiliser for LF Papworth. “All of our nitrogen/sulphur mixes will be a liquid, and all the straight nitrogen will be solid. We will monitor that and see how much further we want to go.

“There are a number of reasons for changing. Practically we can do it. All of the N:S mixes will be applied early in the season so we have the machinery available to do it.

“We can place tanks around the farms, so there will be less running around with fertiliser.

“I have an issue with the lack of flexibility in pricing of solid fertilisers because I want to buy UK ammonium nitrate, and the price is the price. There should be a min/max hedge against gas price, a system where we can be more flexible about how we purchase. We aim to have more flexibility in the pricing with liquid.

“But this is a first season, and I want to see how it goes.

“I don’t want to go down the urea route, because of volatilisation and I’m not convinced by the coatings [reducing losses].”

Frontier agronomist, Jo McGrath provides all the agronomy advice on the farm, although both Mr Papworth and Mr Laws are BASIS qualified.

Chemicals are sourced from Frontier, through the Anglia Farmers buying group, of which Mr Papworth is chairman.