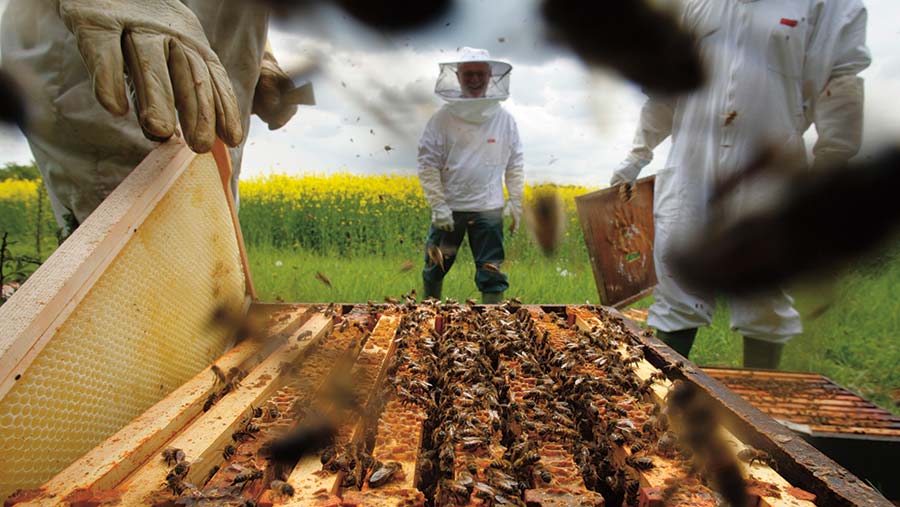 Scientists say they have uncovered the first real evidence that neonicotinoid seed treatments damage honeybee populations when used on farms – but agrochemical companies have disputed the findings, insisting they are inconclusive.

The £2.75m study – billed as the first large-scale, field-realistic experiment to assess the effect of neonicotinoids – exposed three bee species to fields of winter oilseed rape treated with the agrochemicals. It concluded that neonicotinoid pesticides harm honeybees and wild bees.

The findings are significant because previous studies have often been laboratory based – prompting criticism that they fail to reflect the way farmers use neonicotinoid seed treatments in the field to protect oilseed rape crops against pests such as cabbage stem flea beetle.

Researchers from the Centre of Ecology and Hydrology said the field study was designed – as far as possible – to reflect the real world in its size and scope. Their peer-reviewed findings were published in the journal Science on Thursday (29 June).

The paper says: “Our results suggest that exposure to neonicotinoid seed treatments can have negative effects on the interannual reproductive potential of both wild and managed bees, but that these effects are not consistent across countries.”

Funded by Bayer CropScience and Syngenta, the study involved rape crops treated with Bayers’ clothianidin or Syngenta’s thiamethoxam. Environmental groups say the findings reinforce calls for a blanket ban on neonicotinoids – but the agrochemical companies disagree.

Both Bayer and Syngenta insist that the inconsistent country results highlight the need to consider colony strength and environmental conditions. These include bee health, colony size and the diversity of plants as alternative feed sources surrounding oilseed rape fields.

Richard Schmuck, Bayer’s director of environmental safety, said: “We do not share the CEH’s interpretation that adverse effects of the seed treatments can be concluded from this study – and remain confident that neonicotinoids are safe when used and applied responsibly.”

But the findings were defended study co-author Richard Powell. They had been peer reviewed and scrutinised by three independent referees, he said. The study had been designed to represent the complexities of the real world and it was statistically robust.

Exposure to neonicotinoid-treated oilseed rape crops reduced honeybees’ ability to survive the winter in two of the three countries studied.

In Hungary, colony numbers fell 24% the following spring. A similar effect was found in the UK. But no harmful effects were found in Germany.

Lower reproductive success – reflected in bumblebee queen numbers and red mason bee egg production – was linked to increasing levels of neonicotinoid residues in the nests of wild bee species across all three countries.

Study lead author Ben Woodcock suggested the different effect between countries may be due to factors including the availability of alternative feed sources such as wildflowers – as well as general colony health. Hungarian and UK honeybees tended to be more diseased, he said.

In contrast, hives in Germany happened to be larger, showed little evidence of disease and bees had access to a wider range of wildflowers to feed on. This may explain why in Germany there was no evidence of a negative effect of neonicotinoids on honeybees, said Dr Woodcock.

He said: “There may be opportunities to mitigate negative impacts of neonicotinoid exposure on bees through improved honeybee husbandry or availability of flowering plants for bees to feed on across non-cropped areas of the farmed landscape.

“Both these issues require further research. The negative effects of neonicotinoids on wild bees may also be the result of diverse mechanisms of exposure that include persistent residues of neonicotinoids in arable systems due to their widespread and often very frequent use.”

Peter Campbell, Syngenta’s head of research collaboration, said the findings raised “interesting questions that needed to be looked at again”. Data from field conditions was often complex, but the study did show that neonicotinoids could be used safely, he added.

Taking a one-line conclusion from the paper was very simplistic, said Dr Campbell. The country-specific results were intriguing – especially the beneficial effects recorded in Germany. But they could also be an anomaly.