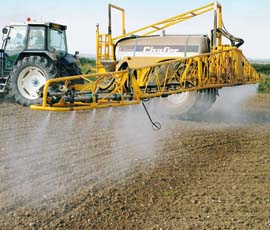 A sequence of two grassweed-active sulfonylureas herbicides will be permitted for blackgrass control next season after the Chemicals Regulation Directorate approved the use of pre-emergence Lexus (flupyrsulfuron) followed by post-emergence Atlantis (mesosulfuron + iodosulfuron).

Sequences of two grassweed-active sulfonylurea weed killers have not previously been allowed because of fears they could increase the risk of resistance building up in the chemical class.

But three years of field trials, backed by laboratory tests, have proven that providing the sequence is used as prescribed, there is no additional risk of resistance building than using just one of the products during the season, DuPont‘s Steve Cranwell says.

“The approval is for flupyrsulfuron to be used pre-emergence of any blackgrass and for it to be tank-mixed with a residual partner with an alternative mode of action.

“If it is used in that way it can be sequenced with a mesosulfuron plus iodosulfuron-containing product.”

Pre-emergence application is important in reducing the threat of resistance building up, Dr Cranwell says. “The ability of the blackgrass to metabolise the chemical [reducing its effectiveness] is less in the roots than in the shoots, so applying it before pre-emergence before any shoot development, reduces the risk.”

Agronomists have welcomed the approval of the sequence. “It brings Lexus back into the range of options growers could use,” says David Ellerton, technical development director at Hutchinsons.

“At least you can use it now. In recent years we’ve steered clear of it, as it would lock you out of using a lot of sequences.”

In Hutchinsons’ trials it has been very effective, he adds. “Lexus works better when used pre-emergence than post-emergence and, when it has been used in sequence with Atlantis, there has hardly been any blackgrass left.

“The perfect anti-resistance strategy is leaving no blackgrass to seed to produce resistant plants in the following seasons.”

Mark Hemmant, Agrovista‘s technical manager, agrees the sequence will be helpful to growers. “It won’t help if you have sulfonylurea target-site resistance blackgrass, but otherwise it is a useful pre-emergence treatment when used in mix.” Most growers would apply it with a flufenacet-based pre-emergence, he believes.

The cost-effectiveness of those mixes are likely to depend on how difficult a grower’s blackgrass is to control and the level of blackgrass. “But if you come up with something that works and controls difficult blackgrass, cost isn’t really an issue.”

Lexus pricing has reduced in recent years, he says. “So it wasn’t all that expensive when it was priced to compete with isoproturon, but it remains to be seen whether DuPont increase the price this year.”

* Resistance risk not increased by sequence

ADAS is calling for growers to supply blackgrass seed samples to feed into its blackgrass dormancy prediction service for this autumn. The ideal time to take for taking samples is late June/early July. Contact Sarah Cook at ADAS Boxworth (sarah.cook@adas.co.uk) or 01954 268215) for a sampling pack.