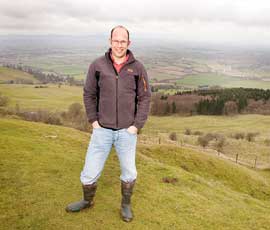 A passion for local food and bringing farming and the public together lie at the centre of our new Management Matters farm in the West Midlands, as Ian Ashbridge discovers

For farms manager Jake Freestone, the diverse business at Overbury is a source of constant challenge and inspiration.

For a start, he’s working with three radically different soil types, which are sufficiently different to support several rotations and are in effect block-cropped as three individual units.

The farmed environment is also the shop window for Overbury Estate and the many people who live in the villages of Overbury and Conderton. The estate’s owners are passionate about uniting the public, particularly children, with how and where food is produced. In addition to delivering this, Mr Freestone must also ensure the farms’ environmental activities are second to none.

“Up on our brash land we have a six-course rotation – winter wheat, winter barley, oilseed rape, winter wheat again and another barley before the specialist, handpicked peas. Then back into winter wheat,” says Mr Freestone.

The highest ground is above 900ft – which provides pea growers with a useful microclimate. This allows them to manage harvesting of peas in whole pods for retailers’ fresh produce shelves. “The height of the hills here is an advantage. These peas have a useful picking window of only about 24 hours in certain weather conditions to meet the supermarkets’ specifications. Growing at this high altitude stretches that window and provides the grower with peas at maturity when they might not be ready elsewhere.

“It’s quite a labour and management commitment for us. In April we’re planting four-hectare plots, Monday and Thursday, for six to eight weeks. That way the growers have a harvesting suite from the last week of July through August and into September. And we get a terrific residual N boost for the following wheat.”

Winter and spring malting barleys are a consistently successful crop for them, he says. “On our thinner soils we can control nitrogen quite successfully. We have a reasonable rainfall and can prepare an early seed-bed and get crops established and away without difficulty. It’s free-draining, so if we see an inch of rain we can be back on it in a couple of days.”

The philosophy here is to target quality crops and prices, rather than generate big heaps. So malting barleys, like milling wheats, find specific homes. “That partly reflects my desire to grow what customers want. For instance, our malting barleys go to Molson Coors at Burton-on-Trent. I’m involved with their Carling Western Growers’ Group with 76 other farmers, and together we supply 20,000t of malting barley to the factory. We’re now talking about expanding that to 35,000t this year.”

This is an example of the kind of integrated approach to farming and food production that Overbury adopts. Despite being a large-scale combinable crop producer, the Overbury approach is to attempt to link what the public sees of the farms with the products they buy. Large areas of Overbury Farms have extensive public access – there are 35km of footpaths and bridleways on the estate – and the opportunity to get his customers’ attention is not one Mr Freestone wants to miss. So walkers approaching Kemerton Camp at the farms’ highest point can see signs on the field gates, explaining that the products of the little green plants in front of them will one day be filling a Carling glass in their hands.

“And from a farm business point of view, it’s proved very successful for us. Molson Coors wants to secure quality British malting barley and we’re actually looking again at the group’s contracts at the moment. We deliver barley with nitrogen below 1.75% to get our contract price and under the new contract we’re negotiating a bonus scale for lower N content. I think that’s unique in the malting barley business.

“It’s not without its challenges. We need to balance N inputs to keep the crop within contract specification, but not reduce it so far that we compromise yield potential.”

Lower down, on the edge of the Vale of Evesham, soils change dramatically. A legacy of extensive sand and gravel extraction for over 50 years presents its own soil management problems. And the lighter loams with some patches that are “like a beach” necessitate a different range of crops and opportunities. “Yields can be quite restricted here – therefore we have to go for milling quality on our wheats to maintain margins.”

This land also supports potatoes – again on ground let to a specialist local grower. “Having come from growing potatoes in Lincolnshire, I saw an opportunity here. We have irrigation ponds on this land left from the old gravel washing pits, and reinvested some of the value of our old sugar beet quota in underground mains irrigation.” Overbury Farms had historically supplied beet into British Sugar’s former factories at Kidderminster and, later, Allscott.

Other specialist crops on this lighter land include spring onions, grown by the same specialist as the peas. “These are effectively a split crop – either over-wintered onions after wheat or barley on our sand-and-gravel land, which are harvested in May, and then another crop it caught on the same ground to harvest in August. Or a simple crop of spring onions sown in March or April and harvested in July. We plough and work the ground down for them and they bed and plant it, and then we’ll irrigate for them.”

Another spoke in the management wheel here is the farm’s 1150-ewe sheep enterprise. Overbury has a significant area of permanent pasture on the high ground, the parkland around the manor house and at Overbury Stud.

The flock of Texel-cross North Country mules lamb in two groups from March to the end of April, producing prime lambs for Sainsbury’s, through the May Hill lamb group, and for private sale to local food outlets and through the estate office.

“The sheep play a big role in communicating what we’re doing here as farmers to the general public. We have an annual lambing day where we open the village hall up and take people round in tractors and trailers. We promote the event to local schools and through local radio and other media – we had 650 people here last year. Our next lambing day will be April 17.”

*Farmers Weekly‘s next visit to Overbury Farms, later this spring, will explore the farms’ major Higher Level Stewardship project, and its impact on the wider business objectives of the farms and the estate.


• Farms manager Jake Freestone was a finalist in the Farmers Weekly/Claas Farm Manager of the Year award 2010. Read his blog at www.farmerjakef.blogspot.com or follow him on Twitter at No1FarmerJake