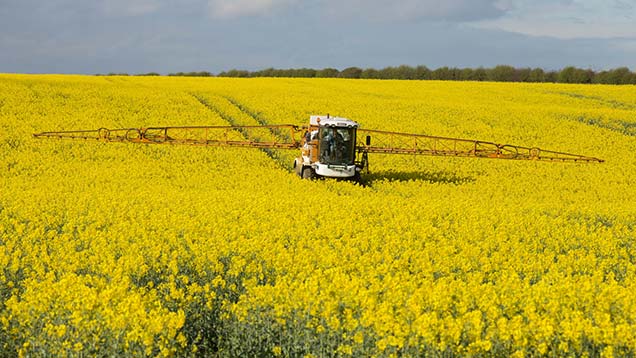 Oilseed rape growers have a new fungicide active this spring, offering an alternative to azoles in tackling sclerotinia as well as bringing a yield boost.

While boscalid is already found in popular flowering spray choice Filan, the strobilurin dimoxystrobin in Pictor from BASF hasn’t been registered for use in oilseed rape before.

Both active ingredients are effective on sclerotinia, claims the company’s Clare Tucker, who also points out that having two components in Pictor is important for resistance management and helping to extend the life of both chemistries.

“Crucially, there’s no azole chemistry in it,” she stresses.

The sclerotinia control from Pictor is the same as the current market leaders, she continues. “But it also offers a yield response in the absence of disease. In our trials, it was 0.23t/ha.”

That’s important, she believes, as many growers are questioning expenditure on the crop this year. “The conditions aren’t always conducive to the development of sclerotinia or other diseases, so it’s reassuring to know that Pictor more than pays for itself by improving plant health.”

The yield boost comes from the physiological effects of both active ingredients, which help to keep the canopy green and improve water use efficiency, she adds.

Other relevant points about Pictor are that it is a liquid formulation and should be applied at 0.5 litres/ha at flowering, from 1 March onwards, recommends Mrs Tucker.

“And it can be tank-mixed with a pyrethroid insecticide, without any antagonism. It won’t mask the repellency to bees.”

Julie Smith, Adas research scientist, explains that spray timing is critical for good sclerotinia control, making it more important than product choice. “With the fungicides we have, both old and new, it’s all about protection. Even spraying four or five days apart can make huge differences to the end results.”

The aim is to get fungicide protection onto the crop before a significant petal fall event, she advises. “That tends to occur from mid-flowering onwards. So a good rule of thumb is to make an application at early to mid-flowering.”

It is possible to get good control from a single, well-timed application, she adds. “In a high-risk situation, either where there’s a history of the disease or high levels of inoculum are around, there may be a need to spray again three weeks later.

“Each spray gives a maximum persistence of three weeks – they start to run out of steam after 18-19 days.”

Pictor has been tested by Adas for a number of years, she reveals. “We have seen some additional yield, of around 0.25t/ha, on a fairly consistent basis.”

While most products will give good control at half rate, there is evidence from HGCA-funded trials that where there’s a high risk, rate should be increased. “There’s a benefit from using threequarter rates in these situations.”

The mid-flowering spray in oilseed rape has more to do than just control sclerotinia, notes Chris Bean, technical director of Zantra.

Botrytis, alternaria, late light leaf spot and phoma can also need attention, he points out, adding that there’s a yield boosting role from keeping the canopy green and using nitrogen.

“Mid flowering is a good time to spray,” he advises. “If sclerotinia is a particular concern, get the petals and leaves coated before a rain event”.

A further reason to go through the crop at this stage is the need for seed weevil and bladder pod midge control, he adds.

The new SDHI mixes for oilseed rape, which include Pictor, are as good as existing choices on disease, rather than better, stresses Mr Bean.

In Zantra’s 2014 trials, the highest yields came from the use of a three-way mix of boscalid/ prothioconazole + tebuconazole/thiophanate, he reports. Only just behind it was an azoxystrobin + thiophanate mix.

“The three-way mixes are definitely worth considering, especially where you’re only spraying once at flowering.”

A half rate boscalid and half rate prothioconazole/tebuconazole mix gave good results too, he notes.

Also in the running was straight thiophanate (as in Taurus) at 0.7 litres/ha. “It’s not a bad option – either on its own in a low-risk situation or in a mix if the risk is higher.”

His final point is that azoxystrobin has always performed well at this timing. “Now that it’s available as a generic product, it could be a really cost-effective solution.”

As a result, Zantra will be looking at whether including a triazole to the azoxystrobin/thiophanate mix brings an additional yield benefit.