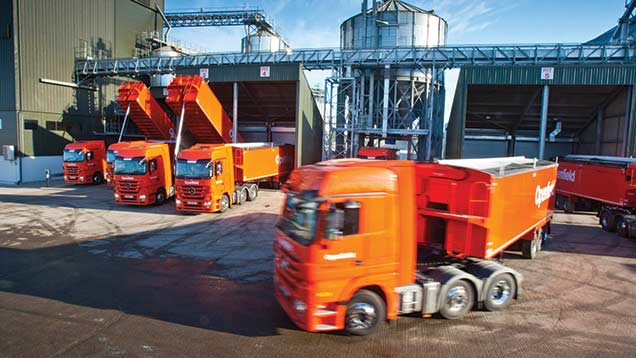 A determination to continue expanding its central grain storage business lies behind recent developments at Camgrain, insists the company.

This autumn has seen the farmer-owned co-operative shrugged off a takeover bid by rival Fengrain. Weeks later, Camgrain then ditched Openfield as its long-standing strategic marketing partner, ending a 10-year relationship to sign up a new marketing deal with Frontier.

A strategic review, carried out as part of the organisation’s normal business practice, sparked some headlines, acknowledges Camgrain chairman John Latham. But recent board decisions were in the best interests of members and the business’s long-term future, he claims.

After a decade of collaboration between the two farmer-owned businesses, Openfield chief executive officer James Dallas says he is disappointed with Camgrain’s decision to appoint Frontier Agriculture as its strategic marketing partner.

But Openfield will continue to work with other central stores and food manufacturers to develop supply chain routes to market and deliver value to its farmer members, in line with its key aims, he says.

“In the 10-year period we worked with Camgrain, the business grew from handling 100,000t to more than 400,000t of grain. During that time, we provided both financial and moral support, to help Camgrain with its rapid development and to get the producer closer to the consumer. We’re very proud of our achievements.”

Openfield will continue to support growers supplying wheat to Sainsbury’s in-store bakeries – an initiative set up by the two businesses in partnership with Whitworth’s, confirms Mr Dallas.

“This isolated decision doesn’t change our business strategy or our reputation with retailers and food manufacturers,” he stresses. “Our farmer members know we are well placed to maximise returns from the innovative supply routes to market that we have set up with our consumer customers.”

“Our business model hasn’t changed since we were established in 1983 – neither have our objectives,” Mr Latham says. “We remain committed to growing the business and providing a first-rate service, while keeping costs down.”

Making the supply chain more efficient and capturing value for growers has always been a priority, Mr Latham says. Camgrain provides “marketing solutions” for its customers, not just local storage for farmers, he adds.

“It means the Camgrain brand is gaining a foothold in the market, which allows us to get closer to the consumer. And that is something we wish to develop. Our intention is for the Camgrain name to become more familiar.”

Now operating four sites – which Camgrain likes to call advanced processing centres – across eastern and central England, the firm has invested more than £43m in the past 10 years – as well as receiving substantial grant aid.

“Our scale allows us to keep construction costs down,” says Mr Latham. “Our target construction cost is now £60/t for flat storage and £80/t for silos, which has reduced significantly as our unit size has gone up.”

During this time, strategic partnerships have been an essential part of Camgrain’s success. “We’ve always formed relationships with third parties so that we bring new investment into our stores and greater capability in the marketplace. It’s allowed us to keep growing the business.”

One partnership was the high-profile relationship with farmer-owned Openfield, which lasted for more than a decade before Camgrain pulled the plug this autumn. Before that, Camgrain’s marketing partner of 20 years was Fengrain, another Cambridgeshire-based co-operative.

Last month, though, Camgrain announced it had appointed Frontier Agriculture as its principle marketing, distribution and strategic partner from July 2015. Frontier will replace Openfield, but other marketing arrangements with Robin Appel and Gowlett Grain are unaffected.

“As far as our members and staff are concerned, it will be business as usual,” explains Camgrain managing director Philip Darke. “The official transfer doesn’t take place until halfway through next year and it will be gradual and carefully managed.”

It isn’t a takeover, he stresses. “The relationship with Frontier will be one of strategic partner, such as we have enjoyed with Openfield. The only change is that we will be taking all of the administration of Camgrain in-house and customers will be seeing more of the brand.”

Takeover speculation was fuelled by an unsuccessful bid from Fengrain in October, when a formal approach was made to the Camgrain board by its near neighbour. The proposal was for Fengrain to acquire Camgrain, transferring members’ storage rights to Fengrain and paying a control premium.

“We listened to their offer, but declined to take it any further,” reveals Mr Darke. “We are quite different to Fengrain in our approach; we are both focused on the end market, but Camgrain doesn’t run a grain trading business and is intent on doing what is right for its storage farmer members.”

Looking ahead, Mr Darke says Camgrain will continue to attract farmer investment and form partnerships with the most appropriate businesses in the marketplace, in order to meet its strategic objectives.

“We are collaborative and commercial. We will carry on bringing efficiencies to the supply chain, capturing value for our members, taking costs out and offering the best service. These new arrangements put us on the front foot and ready for the next stage in Camgrain’s journey.”