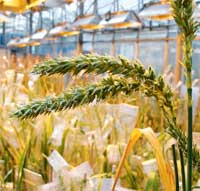 Over £7m is being invested in two new Biotechnology and Biological Sciences Research Council projects aiming to improve breeding of cereal crops.

The projects hope to shed further light on the genomes of wheat and barley. Efforts to increase yields and to breed new varieties of wheat and barley have not kept pace with other globally important cereal crops, so researchers hope that these projects will provide breeders with the tools to develop new varieties more quickly and efficiently and so help to provide sustainable and nutritious food for a growing world population.

The team working on the wheat project includes researchers from John Innes Centre (JIC), The Genome Analysis Centre (TGAC) and Rothamsted Research (RRes), all of which receive strategic funding from BBSRC, and the EMBL-European Bioinformatics Institute (EMBL-EBI) near Cambridge.

Prof Jane Rogers, director of The Genome Analysis Centre in Norwich, will lead the wheat project and is also part of the team working on the barley project. She said: “I’m confident that over the next few years we will see a great acceleration in progress for barley and wheat breeding as we have already seen for maize and rice.”

They aim to produce definitive, high-quality wheat sequence data that will have long-term value for scientists and breeders. This is a considerable challenge as wheat has a complicated genome that is five times the size of that of humans, so an international collaboration has divided the task between a number of different laboratories.

This project will sequence four chromosomes of an experimental wheat line called Chinese Spring to a high degree of accuracy. These sequences will then be used as the reference standard by wheat breeders and researchers worldwide. The researchers hope that, when combined with the efforts of other scientists around the world, they will gain a complete picture of the genetic basis of a wide range of traits in wheat such as yield, quality and disease resistance.

The barley project will be led by Prof Robbie Waugh from the James Hutton Institute near Dundee with partners at TGAC and EMBL-EBI. This new funding will help the UK team to co-ordinate international efforts to derive a high quality barley genome sequence, to transform this genomic information into a platform to understand barley genetic traits and ultimately to enable isolation of the underlying genes.

Because barley and wheat are closely related it makes sense that scientists at TGAC will work on them both together. Barley is often grown on arable land that isn’t suitable for wheat because it is better able to produce reliable yields in the face of drought and poorer soils. High quality barley is crucial for the highly profitable brewing and malting industries that consume around a third of grain crop every year, but the health benefits of eating barley are also well known.

Prof Waugh believes that there is scope to use barley more widely as a food ingredient, for example as a partial replacement for wheat flour in bread or as a thickening agent in processed foods.

“However, some of the qualities that make barley desirable as a food are essentially the opposite of those that breeders have traditionally focused on to meet the needs of the large, premium malting and distilling markets.”