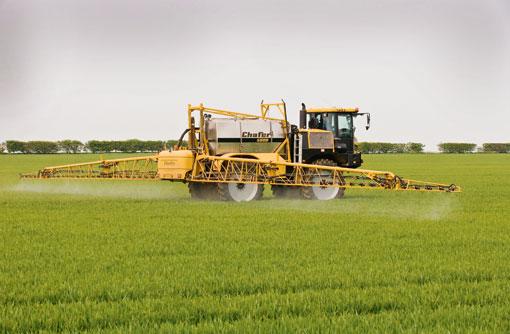 Let the battle truly commence. If last season was a testing ground for the new SDHI fungicides, then next spring is likely to see a larger take-up of the latest fungicide technology in wheat.

Generally positive results with SDHI fungicides last spring are likely to persuade more growers to use one of the three new generation products, following the approval of Adexar from BASF earlier this autumn.

All are better options to use within fungicide programmes than anything else currently available, says Bill Clark, director of Broom’s Barn Research Centre. “There is now good evidence that triazole fungicide performance is still drifting, after we had thought it had stabilised.

“If you use one of the new SDHIs, you get back to the same level of performance we saw with the triazoles about 10 years ago. And as well as the disease control they also give you a yield benefit of about 0.3-0.4t/ha over triazoles.”


It wasn’t always easy to see those yield responses in commercial crops last season in either England or Scotland, admits Allen Scobie, an AICC-affiliated agronomist based near Dundee. “In England, the weather in spring was very dry, and there wasn’t much disease around, while in Scotland it was wet, but after the flag leaf was applied there was very little sunshine to help fill grains.”

Both weather patterns led to yield effects from the new fungicides being somewhat masked, he believes. “Yields were not a disaster, just not where they might have been.”

Where growers did side-by-side comparisons of new and older chemistry on farms where Mr Scobie advises, there was a general trend for the newer chemistry to outshine existing programmes, he says. That’s given him confidence to recommend them more this season.

Andrew Blazey, an agronomist with Prime Agriculture, says his growers felt the new products did produce something extra in a year when yields, while better than expected at one point during the season, were generally limited by the dry season.

“Most will use them again, despite the greater grain price constraints that might be there this season. They have seen enough to say they do a job.”

And based on the evidence from trials where disease pressure was high, especially for septoria, such as in Ireland, then BASF’s new product Adexar might be first choice for many growers.


Containing the new active fluxapyroxad and formulated with epoxiconazole, Adexar is clearly the strongest technically of the new SDHIs, particularly against septoria, Mr Clark says. “I think it is because it is so systemic, whereas Aviator Xpro and Seguris are not, which gives you flexibility in timing and allows it to get onto leaves that are not quite fully emerged at application and to move up the plant a bit.

But the extra performance from Adexar, which was also highlighted in the HGCA’s fungicide performance trials, is likely to come at a premium over the other two actives, Mr Clark suggests. “It is good and probably worth the difference.”

How much that difference is over Aviator Xpro and Seguris will determine its uptake, Mr Blazey suggests. “It looked phenomenal in Ireland last season. But my concern is I don’t know if we’ve had the disease in East Anglia to justify a premium over an Aviator Xpro programme.”

But there shouldn’t be any such fears when justifying the use of an SDHI over a triazole, Mr Clark stresses. “I did some calculations looking at a 10%, 20% and 30% price premium over a triazole programme alone, and in each case the advantage is with the SDHI programme. It doesn’t matter how much Opus you use, you can’t get to the same yield level at you can with Adexar.”