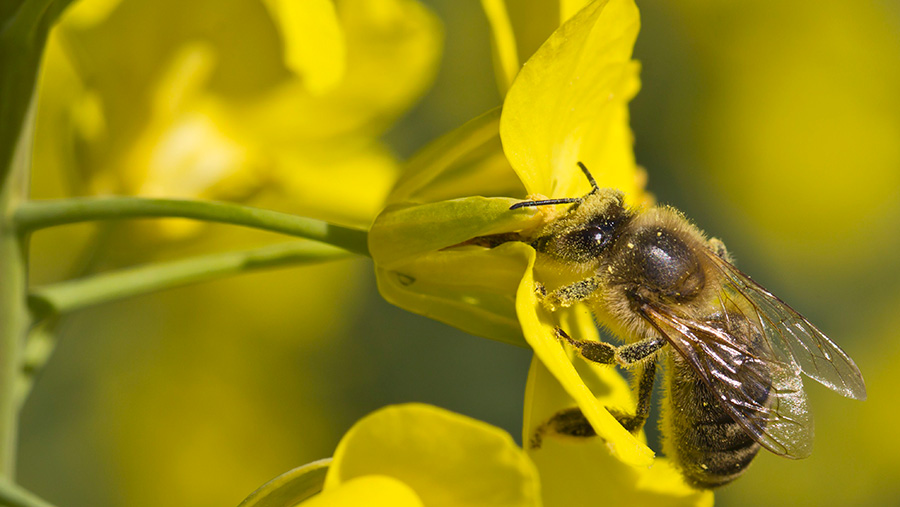 A study has linked the long-term decline in wild bee species across the English countryside to oilseed rape crops grown from neonicotinoid-treated seed.

The research findings were published in Nature Communications on Tuesday (16 August).

Scientists led by the Centre for Ecology & Hydrology examined data provided by Fera Science and the Bees, Wasps and Ants Recording Scheme.

They looked at changes in the occurrence of 62 wild bee species with oilseed rape cropping patterns across England between 1994 and 2011.

This period spanned the introduction of wide-scale commercial use of neonicotinoids.

The scientists found evidence suggesting neonicotinoid use was linked to large-scale and long-term decline in wild bee species distributions and communities.

The decline was, on average, three times stronger among species that regularly feed on the crop compared with species that forage on a range of flowers.

Researchers said this indicated that oilseed rape was a principal mechanism of neonicotinoid exposure among wild bee communities.

They said the findings added to previous small-scale and short-term exposure studies identifying negative effects of neonicotinoids on honeybees and some commercially bred wild bee species.

For five of the species investigated, neonicotinoid use was equivalent to at least 20% of local population extinctions of wild bees.

These included including the spined mason bee (Osmia spinulosa) and the furrow bee (Lasioglossum fulvicorne).

“This benefit however, appears to be more than nullified by the effect of neonicotinoid seed treatment on a range of wild bee species.”

Dr Woodcock said evidence suggested neonicotinoids contributed to wild bee species population decline, but it was unlikely they were acting in isolation of other environmental pressures.

“Wild bees have undergone global declines that have been linked to habitat loss and fragmentation, pathogens, climate change and other insecticides,” he said.

Responding to the research, Friends of the Earth’s (FoE) nature campaigner Paul de Zyvla said:  “The study uses data from real field conditions over 17 years and adds a huge new peak to the existing mountain of evidence showing the risk these chemicals pose to our bees.

“If the government genuinely wants to safeguard Britain’s bees, it must keep the ban on neonicotinoid pesticides regardless of what happens with Brexit – and tighten the way pesticides are tested and licensed for use.”

FoE is also calling for a greater variety of bee-friendly crops and plants in our countryside. Paul de Zylva said: “Bees are no different from us in needing a healthy, balanced diet.

“To get this bees need to visit lots of pesticide-free plants – endless fields of oilseed rape are failing to provide this.”