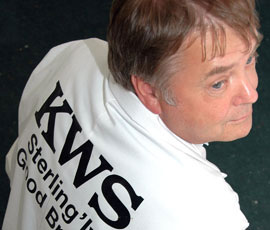 Top barnfiller KWS Santiago is set to be the centre of attention on the KWS Stand at Cereals (E509) this year.

Yielding 108% of controls on the UK Recommended List, no other variety beats it, and at a time of high cereal prices, it is set to deliver the highest gross outputs on farm next year.

At the same time though, two new high-quality wheats will also be introduced. With contracts available for harvest 2012, KWS Podium looks to have top-end Group 2 quality, and KWS Target is a true Group 3, with all the hallmarks of a mainstream biscuit-maker.

And, as is becoming almost a hallmark of KWS varieties, all three have Orange Wheat Blossom Midge Resistance built in, removing the need to spray for this difficult-to-control pest.

As always, master baker John Hayes (pictured) will be giving his opinion on the NABIM Group 2 and Group 3 newcomers and test baking both on the company’s stand for visitors to sample.

In the oilseed rape sector, the company has two new Recommended varieties. At 106% of Recommended List controls, front runner is the high-yielding hybrid Rhino, which will appeal to the Excalibur grower. Equally though, the conventional variety Cash – with its outstanding 8-rating for stem canker – will suit those in the South and East looking to spread their disease risks.

Sugar beet growers will also want to check out two innovative new varieties. Rosalinda KWS is top-yielding variety on the UK Recommended List for the second year running and, less than 2% behind it, newcomer Isabella KWS offers UK growers their first chance to test out a variety with Rz2.0 Double Resistance to Rhizomania.

The company will also be keen to share the latest news on the build up of Beet Cyst Nematode levels in UK soils and highlight best variety selection to minimise yield loss from the pest.

Finally, as one of Europe’s leading breeders of energy maize and beet specifically targeted to produce maximum methane yields in biodigesters, KWS is launching a Guide to Biogas Production at Cereals 2011. Stop by the stand – number E509 – to pick up your copy of this comprehensive pocket booklet and to discuss the best cropping options for this developing farm energy sector.