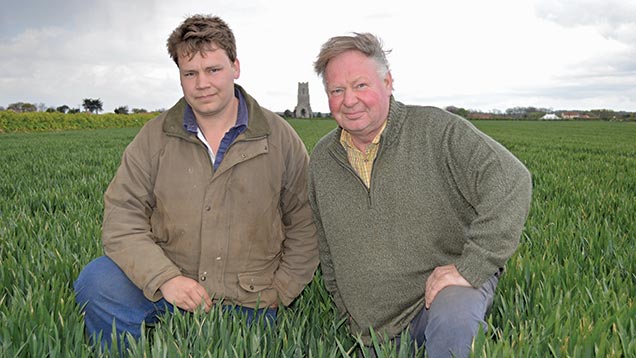 A new generation of winter wheat varieties with good disease resistance could give cash-strapped growers the chance to trim costly fungicide inputs. David Jones travels to Norfolk to find out if savings could be made.

Thomas Love was looking for a high-yielding winter wheat variety with robust disease resistance to give him scope to cut his growing costs.

The variety would have to be suitable for later drilling after potato and sugar beet crops on his coastal Norfolk farm and show vigorous spring growth.

With heavy summer sea frets, his deep loam soils are ideal for growing wheat but also give near ideal conditions for septoria and yellow rust diseases.

He searched for a feed variety with a strong combination of resistance to these two key pathogens and plumbed for the Danish-bred Evolution.

It is one of a new generation of varieties, including even newer ones such as  Reflection and Costello, with better resistance than many older ones.

After trying out Evolution in the autumn of 2012, he drilled nearly half his total wheat area of 200ha to the variety in 2013 and it yielded over 12.5t/ha while also trimming his fungicide bill.

“The variety did well for us last year and was a lot cleaner than other varieties such as Kielder,” he tells Farmers Weekly.

Yellow rust levels in the early spring of 2014 were some of the worst in living memory around the country, and for Mr Love this prompted a very early pre-T0 spray on rust-susceptible varieties.

This meant his other wheat varieties Conqueror and Santiago were treated with a fungicide, but no spray was needed for his 90ha of Evolution, giving him a valuable saving of about £12.50/ha.

“We have never needed a pre-T0 before, but that spring the Conqueror and the Santiago were full of yellow rust,” he says.

Mr Love, who is the chairman of the Norfolk branch of the NFU, works hard to keep his wheat crops clean early in the season, but the absence of yellow rust on Evolution led to a valuable early season saving.

He is hoping that by keeping his crops clean early in the spring he may be able to make some further savings later in the season at the T3 and T4 timings.

This season he has edged up the area of Evolution to 100ha and has replaced the Santiago with Leeds and continued with Conqueror. Evolution is slightly later maturing in line with Santiago and Conqueror.

His 600ha arable farm at The Chimneys, Walcott, some 15 miles north-east of Norwich, is well suited to winter wheat with moisture from the sea keeping the crops growing for longer in the summer and hence boosting yields.

Most crops are first wheats with a target yield of 12.5t/ha, while patches of some fields at harvest have hit 15t/ha.

Cereals account for 320ha of the farm and with the rest down to a combination of crops such as potatoes, sugar beet, vining peas and celery, and so following cereal crops often have to be drilled late in the autumn.

Wheat drilling usually starts after 24 September, and most of the Evolution this season was drilled during the month of October.

This fits in with current advice for the variety, as experts say it is not suitable to very early drilling and should not be sowed before mid-September.

This is because it is a tall-strawed variety which grows very quickly in the early spring, and early-sown crops would get too thick and lush in the spring.

The variety, bred by Sejet in Denmark and marketed in the UK by Limagrain, was the joint top-yielding winter wheat when it made last season’s HGCA Recommended List, and this season was only narrowly beaten by Reflection.

Ron Granger, arable technical manager at Limagrain, says the variety fits the farm well as it performs well as a late-drilled wheat and has good disease resistance.

Its resistance score of 9 for yellow rust and 6 for septoria together is as good as anything on the current HGCA list where 9 is good resistance and 1 very poor.

He says there is a potential to save on fungicide costs but cautions that with the decline in eradicant activity of many fungicides then growers need to protect the health of crops before disease strikes.

“It’s a clean variety which offers growers added security if they are delayed at spraying,” he says.

Mr Granger says resistance in new wheat varieties is more robust than many older varieties, which have broken down to disease, as the newer ones use stacked genes rather than single genes for disease resistance.

Last season, all wheats received a full fungicide treatment including five sprays from T0 to T4 to ensure disease-free high-yielding crops (excluding pre-T0s on some crops).

This season after another relatively mild winter, Mr Love says Evolution has stayed free from yellow rust with only a little septoria being spotted.

This spring the fungicide regime has been similar to last season’s in terms of T0s and T1s, although no pre-T0s were needed even after a largely frostless winter.

“If we go and save too much now, we will only have to bring in the fire engine later. If we keep the crops clean now, we may save at T3 and T4,” Mr Love says.

“Evolution yields well if not better than the other two wheats on the farm and suits late drilling so we are happy growing it,” he concludes.