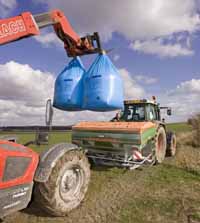 Current methods for calculating crop nitrogen requirements are “blunt instruments” and farmers should be aware of their limitations, according to an industry expert.

“It is a very imprecise science and we don’t tell farmers this enough. If we could bring more precision in, it would be great.”

Incomplete understanding of net mineralisation, the amount of nitrogen that is available to the crop from organic components, is the part of the problem with these systems, he says. “Some recommendation systems make an allowance for it, but don’t do it with complete accuracy.”

Research looking at the accuracy of these systems for predicting nitrogen requirements for feed wheat show that is is more difficult to predict the true nitrogen fertiliser requirement in soils with a higher level of organic material.

Soils with low organic matter content that receive no organic manures, therefore, have a lower level of net mineralisation and fertiliser requirements can be predicted reasonably accurately, he explains.

“If you’re in a system where organic matter levels are low and you are not using organic manures or amendments, the field assessment method is more effective at predicting optimum nitrogen doses for feed wheat than estimating soil nitrogen supply.”

But where organic matter levels are higher and/or organic manures are being used regularly, all systems struggle to give an accurate prediction of the dose of nitrogen fertiliser required, he explains. “The SNS system is the preferred approach, but may only predict within 50kg/ha of the optimum N dose in 50% of the fields.”

HGCA guidelines for nitrogen recommendations in winter wheat use predicted yield to influence optimum nitrogen dose, but analysis of two databases suggest that this approach has to be questioned in feed wheat, says Mr Orson.

In NIAB TAG trials on long-term arable soils where no organic manures have been used, the measured SMNs in the spring were all below 100kg/ha. “There was no trend to suggest that the optimum N dose for feed wheat was related to SMN measured in the spring and the FAM in RB209 was a more reliable system than SNS.”

However, using a database published in a HGCA report, where SMNs were significantly higher, the SNS approach was a better guide to optimum nitrogen doses in feed wheat than the field assessment method, but it is still imprecise, he says.

“Where net mineralisation is low, using the field assessment method for feed wheat crops following cereals or other broad-acre crops is as reliable as or more reliable in predicting the optimum nitrogen dose than the other approaches tested.”

Roger Sylvester Bradley, crop physiologist for ADAS agrees that assessments of crop nitrogen requirements have limitations, but believes they are still valuable tools.

All farmers should have a handle of the nitrogen status of their soils and SMN soil analysis can help them build up a more accurate picture, he says.

“If a farmer has never done soil nitrogen analysis, they should really give it a go as you can get surprises.”

A number of soils that were expected to return low levels of SMN have come back with significantly higher levels, he adds.

Also, accuracy of SMN testing is improving as samples are being processed more quickly. Previously, samples may have been stored too long before processing and readings could have been inaccurate, he says.

Research has proved that heavy soils can be sampled accurately in the autumn, which reduces the sampling workload in the spring, he says. “Spring is still the best time to test light soils, but there is still some question over testing them at all as they always come back with low results.”

An ADAS-lead consortium funded by HGCA is reviewing nitrogen recommendation systems and looking at the benefits of canopy sensing technology (see panel), he says.

“I think the ultimate is to have a rounded system that takes yield measurement, grain protein, canopy measurements and soil monitoring into consideration.”

There are already tools available to carry out these tasks separately, but he hopes a complete system could be developed in the next two to three years.

Soil nitrogen supply (SNS) – The amount of nitrogen (kg/ha) in the soil that becomes available for uptake by the crop in the growing season, taking account of nitrogen losses. It includes an estimate of soil mineral nitrogen, nitrogen in the crop and mineralisable soil nitrogen.

Soil mineral nitrogen (SMN) – Ammonium and nitrate nitrogen content in the soil. Soil samples are assessed in the laboratory and results are expressed in kg/ha of nitrogen.

Mineralisable soil nitrogen – An estimate of the amount of nitrogen which becomes available for crop uptake from mineralisation of soil organic matter and crop debris during the growing season after sampling for SMN.

N-Min – A Growhow testing service which measures soil mineral nitrogen (SMN) and additional available nitrogen to give a total nitrogen measurement of what will be available to the crop during the growing season.

Each uses different sensing technology, but adopt the same approach, judging a crop’s nitrogen demand by measuring light reflected by the crop as the tractor passes over.

The sensors translate this information into an application rate and send a signal to the spreader or sprayer rate controller, which adjusts rates accordingly.

The satellite sensors measure light reflected from the crop canopy. A thicker, healthier crop can be distinguished from bare soil or a thinner crop because of differences in the reflectance characteristics, which are shown in the raw satellite data. Nitrogen rates can then be adjusted accordingly.

The SNS project is compiling a list of industry concerns about the estimation of SNS to determine a suitable course of action. The predictive value of including deep SMN, potentially mineralisable nitrogen, and crop nitrogen is being assessed to determine the most accurate method.

A cost-benefit analysis of direct measurement versus field assessment – as in RB209 – will determine how best to combine these approaches on-farm. The results will then be disseminated to stakeholders and the industry.

The project aims to develop better guidance for soil analysis and greater precision in SNS prediction to maximise yield potential and reduce unnecessary expense on fertiliser, says Dr Holmes. “Both of these will provide environmental and financial benefits.”