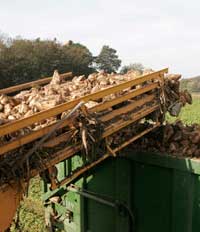 British Sugar and the NFU agree on one thing at least – that longer-term contracts are needed to rebuild confidence and encourage sugar beet growers to invest.

Unfortunately, that’s about as far as their shared vision goes. Any new contract that would deliver those benefits seems as distant as the day negotiations began in April.

The NFU is adamant its proposals represent a major overhaul, paving the way for a longer-term, more transparent contract that would benefit the whole industry.

The headline price that the NFU is demanding – £34.50/t – raised more than a few eyebrows back in the spring. But, insists Helen Kirkman, the NFU’s chief sugar adviser, the figure represents a starting value for negotiations, and is not just for 2010.

“Growers are fed up with the ‘one more year’ climate of decision-making and that’s what we need the next agreement to tackle,” she said. “How we get there is what’s currently being discussed. It is, however, frustrating that, although happy to comment on big-picture stuff, BS is so far not that keen on negotiating specifics and getting stuck in.

“In terms of investment, it is crucial to take a longer view. But growers won’t want change at the current price.”

But BS is yet to blink. Robin Limb, the company’s agricultural development manager, refused to comment specifically on price expectations, but added: “We are fully contracted for our sugar beet requirements for 2009 at £26/t plus an extra £1 for transport. And many growers want to know how much beet they can grow in 2010. That puts the NFU’s claim into perspective.

“We don’t think it can be justified – we know growers’ costs have fallen from last year’s peak by the equivalent of £2/t, while the price has gone up £2.50/t in the same period. Add on the extra transport allowance and growers are effectively receiving £5.50/t more this year than last. That’s a significant benefit.”

British Sugar’s preferred method of moving towards a longer-term contract is based on a cost-plus approach. This is now unlikely to take up much time in the current negotiations. “We had hoped to get the price issue out of the way quickly so we could move on,” said Mr Limb.

He believed a cost-plus price would ensure that sugar beet remained competitive in the rotation as it would allow for other crop values and input costs. But he would not be drawn on values.

Growers remained suspicious, said Ms Kirkman. “We agreed to look at it, but the key question is what formula you would use to arrive at the beet price.

“Assessing cost of production alone is not enough. Most growers who have experience of existing schemes are pretty cynical. It’s too one-sided, and only sets a price at which growers can afford to grow.” There was scope for optimism in the sector, she added, with BS’s parent company ABF’s interim results up 21% on last year. “We need a contract to reflect that.”

An ex-farm price, which would transfer haulage costs to British Sugar and do away with the transport allowance, is also likely to be put aside for now. “We are waiting for the results of an independent study looking at transport efficiency,” said Mr Limb.

“That will inform us all about how transport should be managed. We believe better economies could be extracted, and it is our responsibility to flag that up.”

So, while both sides may want to move on from the annual bun-fight that hinders effective decision-making, they’ve left it pretty late.

It will be hard enough to come up with an annual agreement in time for growers to make sensible cropping plans. Major breakthroughs, it seems, will have to wait.

Apart from price, crown tare and late delivery remain high on the agenda, but could produce vigorous debate.

Ms Kirkman reckoned crown tare remained unresolved. “This really is a good example of how we can add value to the whole industry. BS wants growers to maximise yields – we think the processor should also make a real effort. We are looking at whole beet sampling as well as reviewing crown beet payment. It’s a complicated area and needs real engagement.”

But Mr Limb said BS had paid a contribution for crown sugar for five years, something which made the firm “pretty exclusive” in Europe.

The late delivery bonus was the subject of much discussion earlier this year when Newark was forced to take beet until mid March. That, said Ms Kirkman, had highlighted the inadequacies of the system.