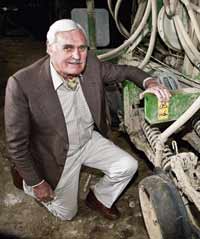 Emphasising the positive environmental impacts of no-till will help growers persuade government of the need to support the technique, John Landers, a long-time no-till consultant to Brazilian farmers, told growers at the second No-Till Alliance farm day in Kent.

It could even help build a case for asking for financial support or grants during the no-till adoption period, he suggested. “There needs to be equal recognition of the changeover costs as for organic growers. They are given a grant for five years from the EU. Why shouldn’t zero-tillage also be subsidised?” he asked.

Experience had shown that yields could decline, particularly in the second and third years, following adoption of the technique, plus potentially the cost of buying a new drill. “But any assistance should also include the cost of technical help.”

The positive environmental benefits, such as more winter feed for wild birds, increased bird, hare, beetle and vole populations, cleaner water through less erosion and silting of rivers and reservoirs, could help persuade politicians, he believed.

“But you need to produce the information that politicians can use to support no-till,” he stressed. That could be information comparing different tillage systems for their environmental impact.

It didn’t need to be from an in-depth research project. Pioneer farmers in the UK, who were successfully using the technique, had a lot of information that could be collated, he reckoned. “The data is there. The problem is for researchers if it isn’t replicated three times, it doesn’t exist. But for me, if a farmer measures it, I believe it. And if you put all those experiences together it can build into something valuable.

“It just needs someone to co-ordinate it. Perhaps funding could be found for a rapid rural appraisal survey.”

The current situation in the UK was very similar to what he faced around 25 years ago in Brazil, he suggested. “Researchers and advisers are sceptical. It is a change that takes them outside their comfort zone.”

It was at that point he helped form the Central Region Zero Tillage Association to help push the technology because researchers and the advisory service weren’t doing it.

Now, over 15m ha of crops were established using a no-till system in the Cerrado region of Brazil, compared with just 180,000ha in 1992, he said. “Fifty-five per cent of the arable land is no-tilled in the whole country.”

One of the drivers for the uptake had been soil erosion. “With cultivation and bare soil, you can easily lose your top soil and results in dirty water. But if you plant through [previous crop] residues your soil is protected.”

Calculations had suggested that the equivalent of 23t/ha a year of soil was being lost where the land was being cultivated and bare soil left, compared with just 6t/ha a year when direct drilling, he said.

“Also the amount of runoff from rain is much less – 70% less under no-till.”

The switch had meant many growers no longer needed contour banks on sloping fields to protect against erosion. “You can plant up and down 25° slopes as long as you have a residue.”

Large Brazilian growers had also adopted no-till because of cost, and finding the technique increased yields and profits, he said. “Crops could also be planted earlier and were more easily managed, which left more time with families.”

Smaller-scale growers found the technique enabled them to reduce labour, and diversify their businesses.

The no-till farmer associations in Brazil had played a crucial role in that adoption process, providing basic instruction, farmer to farmer meetings, courses and planter clinics to help growers, he said.

They had also helped direct targeted research into topics growers needed help with. “It is important growers have some control of research. In Brazil it is farmer-pulled.”

Examples of successful applied research led by the no-till clubs included investigations into which cover crops could be used without negatively impacting on yields of subsequent crops, nitrogen doses in soya beans and comparisons of different rotations where there was no irrigation.

To find out more about the No-Till Alliance visit its website at no-tillalliance.co.uk or email directdrillday@googlemail.com