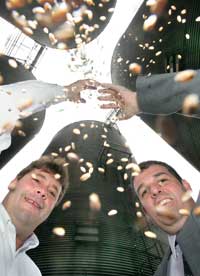 A farmer-owned co-op in the north-east of England has received £135,000 of Rural Development Programme funding to expand and improve its grain storage.

The money will allow Tynegrain of South Shields to complete the final phase of a £1.3m programme of improvements that it started last year.

One new grain dryer has already been installed and another will be put in place after this harvest. In addition, there will be a new intake pit for the 75,000-tonne store and one full-time post will be created instead of the seasonal worker currently employed.

Tynegrain chairman Charles Beaumont, said the funding boost would speed up the planned investment schedule and allow the co-op, which has 114 members, to capture new markets and move forward with confidence.

“With the changing local market dynamics it means Tynegrain is now in a position to compete as a supplier to the higher end of the domestic food market as well as its traditional feed export outlets,” he said.

It is understood that the co-op has already secured a supply agreement via its marketing agent, Grainco, with a large branded food business.