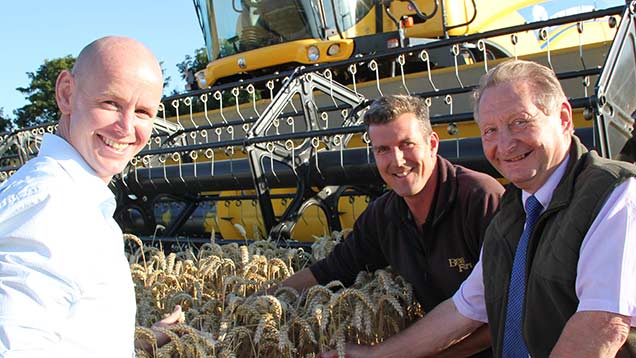 Northumberland grower Rod Smith has beaten the world wheat yield record by a whisker after an ideal growing season with plenty of sunshine and low disease levels.

Harvesting only 10 days after Tim Lamyman’s record crop in Lincolnshire, Mr Smith recorded a yield of 16.52t/ha on his farm overlooking Holy Island on the Northumberland coast.

He achieved this bumper yield with inputs similar to those used commercially across the farm, which helped push his average winter wheat yields to above 14t/ha this summer.

“We had an ideal growing season. We were lucky with the weather and the crop was never under stress,” Mr Smith told Farmers Weekly.

The yield from one of his most fertile heavy clay fields beat the 16.50t/ha achieved by Mr Lamyman, and is being claimed as a world best with the Guinness Book of Records.

Mr Smith said a number of factors came together to produce the high yield such as a long growing season and low disease pressure on the chosen field, which he says has achieved a 15t/ha-plus crop in the past.

In previous seasons, he says there was always some factors which limited yield such as dry weather, waterlogging, disease, high temperatures or a lack of sunlight, but last season there was little to hold back yield.

These inputs include four main fungicide sprays, 310kg/ha of nitrogen fertiliser and a relatively high seed rate of 185kg/ha.

The crop was harvested on 1 September with the farm’s tracked New Holland 9070 combine crawling along slowly to cope in a crop where the in-cab yield meter was running over 23t/ha on some fertile areas.

A team of independent adjudicators was used including surveyor Rob Forrest and local vicar Victor Dickinson, to record a crop yield of 16.519t/ha at 15% moisture from the 11.3ha field.

This would smash the current Guinness Book of Records title held by Mike Solari’s 15.64t/ha crop grown in New Zealand in 2010, as Mr Lamyman has not registered his crop with Guinness.

The feed wheat variety Dickens was chosen for its high yield especially in northern areas, and was well suited to Mr Smith’s 400ha of largely arable land at Beal Farm, about 10 miles south of Berwick and nearly 50 miles north of Newcastle.

The chosen field was subsoiled after a crop of spring beans and the ground minimum tilled, and then was drilled in the third week of September.

“It was very good conditions for drilling with plenty of green manure left over from the bean crop,” he says.

The strategy was to aim for a 17t/ha yield at 11% grain protein so a four-way split of the 310kg/ha of nitrogen was used along with a four-spray plant growth regulator programme.

Nitrogen levels could have been pushed higher, but some caution was shown due to residual fertility from the previous bean crop and the risk of the crop lodging.

A fungicide seed treatment along with a full fungicide programme was used to keep enough green leaf through the season to support a crop with an average 820 ears/sq m and 36 grains/ear recorded in July.

Andrew Wallace, agronomist with distribution group Agrii, says there was plenty of septoria and yellow rust around in the area, but the dry spring kept disease at bay.

”We fed the crop sufficiently, which kept it looking very green. Early septoria disappeared in the dry spring and there was a long grain-filling period,” he says.

Mr Wallace adds that the crop was kept green with the top four leaves staying green way beyond the T3 head spray stage during in June.

For the future, yields could go even higher as Mr Smith saw yield recordings top 23t/ha in low areas of the field which stretched over 2ha, which benefitted from nutrients running off from other areas of the crop.