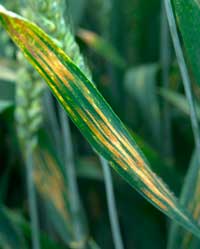 Top-yielding wheat variety Oakley has been taken out of Recommended List trials.

It is likely to be removed from the RL in two years’ time because its yellow rust resistance has fallen to an unacceptable level, the HGCA has announced.

The decision to remove it from consideration follows the widespread appearance of a new race of yellow rust during 2009. Oakley’s resistance is now rated at only two.

“We considered the situation and decided to take it out of trials,” Ben Miflin, chairman of Crop Evaluation Limited, the body responsible for running the RL trials, says.

Effectively that means the variety will no longer be officially considered for continued recommendation, although it will remain on the RL for two further years, so growers can remain informed about its performance relative to other varieties.

The variety, which was the most popular in seed production with 12% of the certified seed area in 2009, will also still be used as a control variety in both National and Recommended List trials this season.

“Oakley has been, and still is, an outstanding variety in trials with its high yield and orange wheat blossom midge resistance, and is likely to be widely grown for the 2010 crop. However, its increased susceptibility to yellow rust means that disease control measures will have to be effective,” Dr Miflin said.

“CEL reflected on this in removing Oakley from trials, but the clear message to farmers is to weight carefully the benefits of Oakley with the potential yellow rust risks in comparison with alternative varieties.”

Many of those other varieties also had weaknesses, pointed out Andrew Newby, from Oakley’s breeder KWS. “The next one on the list, JB Diego, is a three for brown rust, and doesn’t have midge resistance, Duxford also gets brown rust, and then you’re down to Viscount, which gets the same race of yellow rust, albeit not as badly.

“All varieties have weaknesses; it is being aware and dealing with them.”

Despite a lot of discussion since June about Oakley’s yellow rust weakness it was still likely to be the top-selling variety in the ground this autumn, following its strong on-farm performance last year, he said.

“I don’t believe it will go out very quickly, although its life may have been shortened. It could have reached 18-20% this year, but growers being aware of its shortcomings, despite it being the highest yielding variety on the farm, have been sensible when choosing varieties.

Oakley’s future was likely to be determined by what happened to the variety this year, and how aggressively yellow rust attacked, Peter Riley of Prime Agriculture suggested.

“Farmers need to be alert for yellow rust. In susceptible areas they will need to be prepared to do something more than normal.”

Options included using a yellow rust-active seed treatment, T0 triazole fungicides or even one in the autumn, he said.

The seed trade said it was a little early to determine what it meant for Oakley sales for 2011 harvest. “It could decline next year, even rapidly, but it will be due more to performance on farm than because it isn’t going to be on the RL,” Charlie Whitmarsh of Frontier said.

“But if it performs well, a lot of growers will be tempted to carry on with it.”

Yellow rust control on farm would depend on using the appropriate fungicides, starting in good time, at the right rates and with gaps of no more than 21 days, he said.