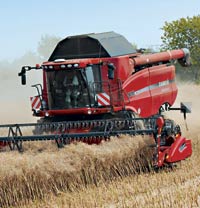 Would you pay $60,000 (£37,000) to equip your combine with a grain dryer? An American inventor has the prototype ready but no company is making it, yet

If you thought the only use for a microwave oven on the farm was to cook macaroni cheese, think again. Alvin Snaper, an inventor and owner of Neo-Dyne Research in Las Vegas, Nevada, has another use in mind for them. He sees farmers someday using them on their combines.

And no, not for heating up their lunches. He has a clever idea that would allow a combine to harvest a high-moisture crop and dry it down to an acceptable moisture level using microwave technology. “It works exactly the same way as an ordinary microwave oven,” says Mr Snaper.

Mr Snaper’s microwave grain dryer is designed to be attached to an ordinary combine, turning that Claas Lexion, Deere or other machine into both a thresher and a grain dryer rolled into one. The design allows for grain drying to occur continuously as the machine moves the kernels from the threshing mechanism up to the hopper.

The idea started a few years ago when a consortium of grain farmers in the US Midwest hired Mr Snaper to look into the feasibility of a combine-mounted dryer to improve productivity. “The whole concept was to eliminate post-combine drying,” he says.

Mr Snaper already had more than a few successful inventions under his belt at the time, which made him a good candidate for the job. As it turned out, he proved his microwave concept could work after building a functioning prototype.

But at first, Mr Snaper found the microwave dryer required an enormous amount of electrical energy, more than could be generated by the combine. That made it impractical. When he decided to make use of the waste heat from the combine engine’s exhaust, things changed. Typically, engine exhaust heat is wasted energy, but not with Mr Snaper’s system.

“By utilising waste combine engine heat, we brought the microwave power requirements down to a realist level,” he says. That reduced the electrical demand from the microwave chamber to a manageable 5kW. In all, the grain spends about four minutes passing through the chamber, then it’s dumped into the combine’s hopper, dry and read to store.

While using exhaust heat reduced the amount of microwave energy necessary to dry the grain, it had another benefit. The combination of microwaves and hot air complemented each other perfectly. “The microwave dries moisture from the centre (of the kernel) out, while heat dries from the outside in,” Mr Snaper says. That reduced the risk of kernel damage from the drying process. “Grain is less degraded with both (drying sources), he adds.

Exhaust heat is used to preheat the grain as it starts moving through the drying system, but the design continues to apply it as the grain moves through the drying chamber where the microwave energy is applied, which means the hot-air flow from the exhaust also helps carry vaporised moisture away from the grain. That further increases the drying efficiency.

Snaper’s prototype can handle 0.6t/min and reduce the moisture content by as much as 10 percentage points. “We came up with a small unit that was suitable for mounting on a combine,” he says.

But while that capacity may not be enough for today’s big combines, reducing the moisture content by that much means the concept has the potential to greatly extend the harvesting season. And most importantly, it can be scaled up or down, says Mr Snaper. So that 0.6t rate could be boosted to match any combine’s capacity.

However, further development of the prototype stopped when the group that hired Mr Snaper ran out of funds. That left him with ownership of the Canadian patent rights to his microwave dryer. Now he’s looking to sell the technology to anyone willing to turn it into a market-ready system.

Mr Snaper sees the microwave drier as either an aftermarket add-on or an option built in by a manufacturer. But just how much would the concept add to a combine’s price? “We were looking for a sale price of about $60,000 (£37,000),” says Mr Snaper.

That sounds like an expensive feature, but the potential gains from it are enormous. If Mr Snaper’s drier can drop moisture levels by 10 percentage points, it would add more combining days to a harvest season and maybe eliminate the need for an extra combine. It could also cut the amount of diesel, kerosene and lpg being fed into farm driers.