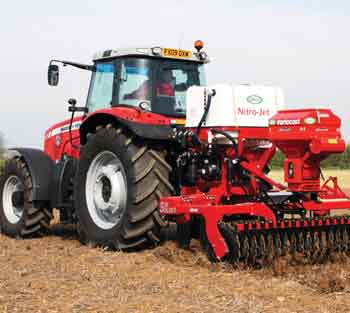 Designed to work hand-in-hand with the Variocast seeder unit, the Nitro-Jet is positioned on the rear bracket of the He-Va subsoiler and places seed just in front of the packer roll. Nitro-Jet nozzles apply a jet of nitrogen just in front of the sub-soiler leg. The disturbance of the leg through the soil is enough to incorporate the nitrogen into the first inch of soil where the seed falls, giving the seed immediate contact with the nutrient.

“Tighter NVZ rules place greater restraint on growers come autumn and the limit for application on any OSR crop is 250kg/ha. Of this, only 30kg/ha can be applied in the autumn,” says Mr Woolway.

One way to overcome these challenges, he says, is using the till-seeding sub-soiler method. “Broadcasting fertiliser over band-sown rape can be wasteful. By applying in bands where the seed is sown, the plant gets hold of more of the compound, in this case nitrogen, particularly in the autumn when the root structure can’t absorb other chemicals.

The mounted unit comes with either 600 or 800-litre tanks and all units have a self-fill function as well as a 700-litre/min high capacity pump, which allows producers who may not have access to liquid fertiliser the chance to fill from IBCs in the field. A nozzle manifold and piping for five nozzles are standard, while additional nozzle outlets and brackets cost £125 for subsoilers with more than five legs.


For those who want more capacity, there’s 800 or 1000-litre front-mounted options with a distribution hose from front to back. “This has all the same features, just the option to go bigger if required,” says Mr Woolway.

Equipped with a Raven spray rate controller, the Nitro-Jet also has ground-speed in-cab variable rate control, thanks to a landwheel on the Variocast setup.

The narrow band nozzles are mounted on the headstock bracket about 4-5in in front of each sub-soiler leg, each with a rubber protection arrangement to prevent damage if clouted by a soil clod. For those worried about nozzles blocking in dry conditions, the pressure in the sprayline should prevent this, says Mr Woolway. But blockage alarms can be added as an extra.

Although the applicator has been specifically built for the Danish-built He-Va machine, it will be possible to mount it to most other subsoilers.

Price for the subsoiler-mounted version is £9970 and for the front-mounted tank option is £9904.