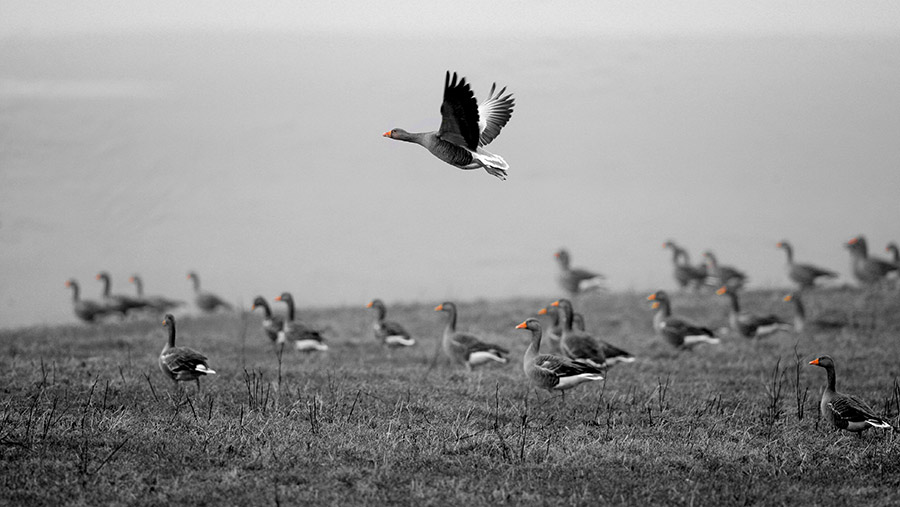 Orkney farmers are hiring armed guards to tackle the destruction of their crops and grass by greylag geese.

Farmers and crofters on the Scottish islands say they have had to resort to the measure following a large increase in geese numbers in recent years.

About 24,000 greylag geese now live on the islands, and farmers say they are causing serious damage to livestock pasture and valuable crops, especially barley, running into thousands of pounds.

Marty Hay, an agricultural contractor at J&S Hay, based on Orkney, said: “We have about 300 acres [120ha] of crops spread across rented fields, some in Harray, some in Stenness, and the greylag geese do enormous damage, especially at this time of year at harvest.

“We grow about 100 acres [40ha] of bere barley for the Baroney Mill and that matures quite early.

“They seem to go onto that fast and eat into it, especially if any spots go flat where they can get in and land.”

Mr Hay described the geese as “very efficient” at harvesting grain. “They just strip the grain off the head and just trample down the straw as well,” he said.

The geese can clear an acre of barley in just a couple of nights.

But despite putting out scarecrows, old cars, bits of machinery, bangers, flashing lights and sirens, they still lose up to 1.6ha each year due to damage caused by the geese.

“They seem to get used to everything. It’s nearly a full-time job,” he said.

Mr Hay said shooting the geese was the “most effective” measure.

“A lot of farmers shoot [geese] themselves, but it is time-consuming. Now, we just employ guys to do it,” he said.

Mr Hay said the problem was getting worse, and he would like to see the authorities carry out more culling of the geese in the spring. Some farmers had stopped growing barley altogether.

One shooting guide and crop protector in Orkney said: “A lot of farmers ask me to come and protect their crops at this time of year as the geese are munching through their crops at harvest.

“It’s early mornings, late nights. You can be asked to go anywhere at any time. It costs a lot of money to sow these crops, spray them and everything.

“They have to do what they need to do so that they can bale their crops, harvest them and get them in the sheds.”

Since 2012, the group has been carrying out management to sustainably control the resident Orkney greylag geese population, with the aim of reducing the impacts on farming.

The general licence, which allows the control of greylag geese to prevent agricultural damage, is in place again this year. Under this licence, land managers can carry out shooting during the closed season.

The general licence also allows land managers to carry out egg oiling to control greylag geese – a method of treating eggs with mineral oil to prevent chicks hatching, which is regarded as efficient and humane.

Steven Sandison, Orkney NFUS chairman, said: “I would like to encourage land managers who are experiencing damage to crops caused by greylag geese to use the different options under the general licence to try and control numbers.”

Greylag goose meat sales are also possible under a general licence for Orkney. Copies of both licences can be obtained on the NatureScot website, by calling 01463 725 364 or by email: licensing@nature.scot.