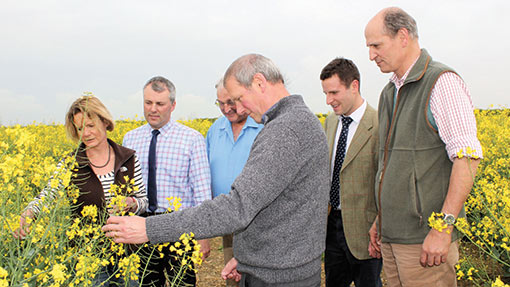 This autumn will provide the first test for farmers looking to grow oilseed rape without neonicotinoid seed treatment that had provided protection against costly early pests.

Effective early establishment will be key, say three growers who aim to get their crop up and away from pest pressures in the autumn by choosing vigorous varieties and tailoring their establishment techniques to encourage quick growth.

Andrew Ward, who farms just south of Lincoln in Leadenham, has been growing high oleic, low linolenic (HOLL) varieties, which give a healthier oil, for six years.

On his mix of free-draining, sandy soil and heavy clays, finding the right establishment method is a big factor in helping his crop fly through the early growth stages.

“The drilling period will be critical. You need to give the crop every opportunity to get away quickly now we have lost the insurance of the seed treatment,” he says.

Mr Ward adds that getting the right seed-to-soil contact will need good seed-bed preparation and consolidation once it has been drilled, and he used a cultipress to get consistant consolidation deeper into the soil.


“We are really looking for vigorous growth when we are breeding as it is the biggest component of yield stability and can help combat problems by getting away quickly, “So none of our breeding trials receive any seed treatment,” he says.


Mr Clarke adds going with a faster developing variety, such as Expower, will give fast vigorous growth in the autumn and the spring and allow the crop a better chance of escaping early pests.


He says neonicotinoids were a useful addition to the armoury, but without them growers should focus on variety choice and management.


“Choose a variety selected in the absence of neonicotinoids and manage it better early on rather than making knee-jerk reactions like increasing populations, which could increase problems in other areas,” he suggests.

Also key is the liquid nitrogen fertiliser that is applied to the crop during drilling.

“I was always sceptical about getting nitrogen on when drilling, but I think now the neonicotinoids are not there it is critical to put fertiliser on at sowing, again just to give it the kick-start it needs,” he says.

Mr Ward is resisting the temptation to increase the seed rate to cover himself for any losses as a result of the seed treatment ban.

“We normally go with a fairly low rate on the lighter land of 20-25 seeds/sq m and then increase this on the heavier land up to 50 seeds/sq m, but I wouldn’t increase it as a result of the ban,” he adds.

Mr Ward’s biggest worry is the extra workload of monitoring pests and fine tuning establishment techniques that will come at a time when farmers are already stretched.


“Most growers will be combining at the same time as they are drilling their oilseed rape around the end of August. I think this year the attention to detail will be even more important, but we may not have the time,” he adds.

In the West, Somerset farmer Richard Payne agrees that the importance of establishment will be amplified by the neonicotinoid ban.

“Getting it right at the start will be vital and you have got to think that anything we do at the front end will help alleviate the pressure of spraying further down the line,” he says.

“An extra pass with the rolls may save two or three passes with a sprayer later in the season when you are trying to control weeds and pests,” Mr Payne adds.

Variety choice will play another factor in getting ahead of the game and this year’s crops have already given a good indication of what might help cope with the increased pest pressure.

The varieties Harper, Excellium and Extrovert, have all been grown on his silty clay loam soils, with Extrovert showing particular promise.

“It looks like a good early vigorous variety so we will probably stick with that. We sow at a fairly low 40 seeds/sq m,” he explains.

While variety choice and establishment are important, growers still have the option of a chemical approach to tackle pests head-on.

BASF agronomy manager Clare Tucker, says pyrethroids and primicarb give protection against aphids and flea beetle. However, she warns against blanket spraying because of growing resistance.

Poor control of cabbage stem flea beetle and aphid-spread turnip yellow virus are the biggest worries following the ban, and Ms Tucker urges monitoring will be key and growers should not assume they have to spray.

For cabbage stem flea beetle, she suggests two yellow bowls are placed on the headlands and two in the main part of the field either pre- or early-drilling, with growers looking for a spray threshold of about 35 beetles.

“What you don’t want is to be putting to much pressure on the sprays that we have left as resistance is becoming more of an issue,” she says.

Herbicides will also play a role in giving oilseed rape the best opportunity to grow away from pest damage.

“Much of the yield is formed in the autumn and if you are getting the crop away to a good start you are also improving the efficacy of sprays later on. You need to keep crop competition low and remove weeds early on in the life of the crop,” she adds.

This autumn, he hopes the ban of neonicotinoids won’t be too detrimental to his crop on Childerley Farm and expects that soil conditions, rather than drill date, will be key.

Speaking at a special growers’ roundtable organised jointly by Monsanto and BASF, Mr Jenkins says his later-drilled crops this season are better than the early ones and believes it is down to soil conditions at sowing.

“You need to be going into moisture with good tilth and small crumb size to make sure it doesn’t dry out early on and the crop gets away fairly quickly. I think drought can often be one of the biggest issues,” he says

Mr Jenkins is planning on sowing about 280ha between 20 August and 5 September with a mixture of conventional and hybrid varieties, but will wait until he gets yield data to make his decision on which ones.

Using a direct drill after straw removal or a subsoiler method on the compacted areas, Mr Jenkins is aiming for a rate of between 40-80 seeds/sq m.