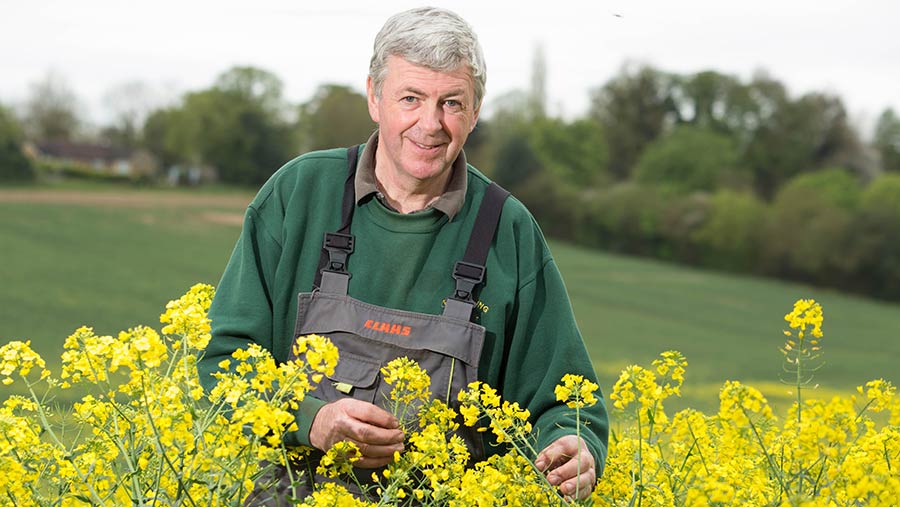 Lessons learned from one of the most challenging seasons for growing oilseed rape are helping Bedfordshire grower Philip Woods fine-tune his future management of the crop.

Oilseed rape has an important place in the rotation at DH Woods & Son and PR Farming, so his system is geared towards giving the crop every chance to fulfil its potential.

Low-disturbance strip tillage and the use of variable seed and fertiliser rates are standard practices at Lynchfield Corner Farm in Kensworth, while companion cropping also has a place.

In such a tricky year, some of these techniques have worked better than others, allowing him to work with his agronomist, Damian McAuley, to adapt his production system.

In August, the pressure created by drought stress and high cabbage stem flea beetle numbers confirmed the role of early vigour in establishment success and convinced him of the value of hybrids.

It also reinforced the importance of careful management at the establishment stage, so that the crop is given every chance to grow away strongly from day one.

“What we’ve seen, as 2018-19 has progressed, is that seed-bed quality is critical and that you have to be prepared to spend on hybrid seed to be sure of getting a fast-developing oilseed rape crop,” he says.

That means making sure that soil moisture is not being lost at drilling, through the appropriate choice of drill and getting residue management right, as well as keeping on top of pests.

He favours a Mzuri strip-till drill where conditions are suitable, and uses a straw rake for even residue distribution. At drilling, fertiliser is placed with the seed and, if required, slug pellets go down the same day.

“We’re committed to treating it like a vegetable crop. It takes planning and precision to get oilseed rape to perform,” he says.

Due to the dry conditions, some of this year’s crop had to be drilled with his Horsch drill, fitted with low disturbance narrow coulters, rather than his preferred Mzuri.

“I’d sold the barley straw, so there wasn’t any residue to help with moisture retention. That made it more challenging,” he adds.

The farm’s policy of improving its soils and minimising soil disturbance has paid off, with seed that went into well-textured soil with some moisture doing better than in poorer areas.

“We only get 65% establishment in some of our north-facing fields,” he says. “If the plants can get their roots down quickly and keep going, they have a head start. Late or slow emergence is bad news and puts it at the mercy of pests.”

With 55ha of oilseed rape being grown on the home farm and a further 225ha on contract farms, only one area of the crop failed at emergence this year.

“Although it’s tempting with the pressures that oilseed rape is under, a cheap and cheerful approach is not the right one for us. The crop that was lost was being grown on poorer soils with less organic matter, so there wasn’t enough moisture,” Mr Woods says.

Flea beetle did arrive in August, but weather conditions were just as much to blame for any loss.

“Some of our crop went into baked clay, which slowed it up. Crops drilled into long stubble and chopped straw romped away,” he adds.

His choice of variety for the home farm, Extrovert, proved to be the right one. Having been drilled on August 22, it managed to beat the pest onslaught, albeit with the help of one insecticide spray. 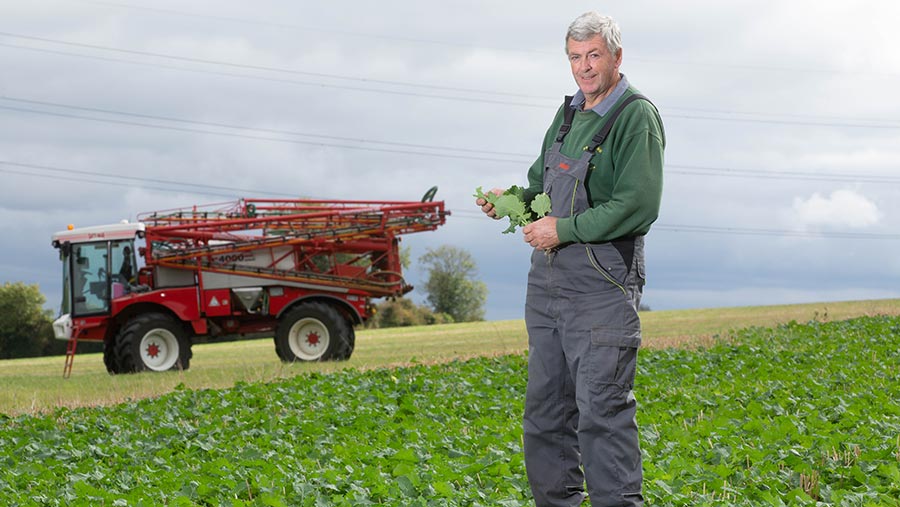 Extrovert got off to a good start on August 22, beating the flea beetle

It was accompanied by a companion crop of berseem clover, which was aimed at assisting rooting and reduce weed germination, while also possibly distracting flea beetle.

“We’ve had success with companion cropping in previous years, but it struggled in the very dry conditions this season. Luckily it’s not an expensive thing to do,” he says.

A trial 12ha area of Clearfield oilseed rape hasn’t impressed from the beginning and he doubts that he will grow it again.

“For whatever reason, it lacked vigour compared to the ordinary hybrid. It’s thinner and sparser, even though we followed the seed rate guidance, and it’s more than a week behind. That means the pigeons are on it,” says Mr Woods.

He recognises that his experience in not an inherent Clearfield issue and that it highlights how important vigour has been this year.

He opted to try Imperial CL on a charlock-infested area of the field, but took the opportunity to compare it with a 6ha trial of Corteva’s new post-emergence herbicide Belkar (halauxifen-methyl + picloram) on some Extrovert, where there was a range of broad-leaved weeds.

“Belkar seems to have worked well. We did a 0.5l/ha application and it has done the job that was asked of it,” he says

At about £60/ha, it’s equivalent in cost to a pre-emergence herbicide. Applying Belkar to parts of the field, rather than all of it, would bring the cost down but its use would take out berseem clover.

“Ideally, we want the clover to be there until early December. There’s not much point adding it where we’re going to use Belkar in the future,” he says.

Where the crop’s development has been checked for any reason, larvae have been able to damage plants and as a result many crops have been ripped up.

“Larvae are all too easy to find,” he says. “The weather conditions allowed the adult beetles to keep reproducing and survive until January, so numbers are off the scale.”

Where crops received some rain in the autumn, they established well and appear to have more yield potential than larvae-infested crops.

Along with his colleagues at Indigro, Mr McAuley has prepared a checklist for oilseed rape growers ahead of this autumn (see panel).

“Aim to get the crop to Christmas. Hybrids going into good seedbeds in well-structured soils will usually be fine,” he says.

On a positive note, new herbicide Belkar does appear to offer some flexibility and has worked well in many situations.

“It looks extremely useful. Shepherd’s purse, fumitory, crane’s bill and cleavers have been well controlled, although you do need to hit the crane’s bill before it gets too big,” he says.

Charlock is not on the label but has been knocked by the herbicide. “We’re not sure if it’s been killed outright. Don’t rely on Belkar to kill charlock – if that’s the main issue, then you need to go down the Clearfield route.”