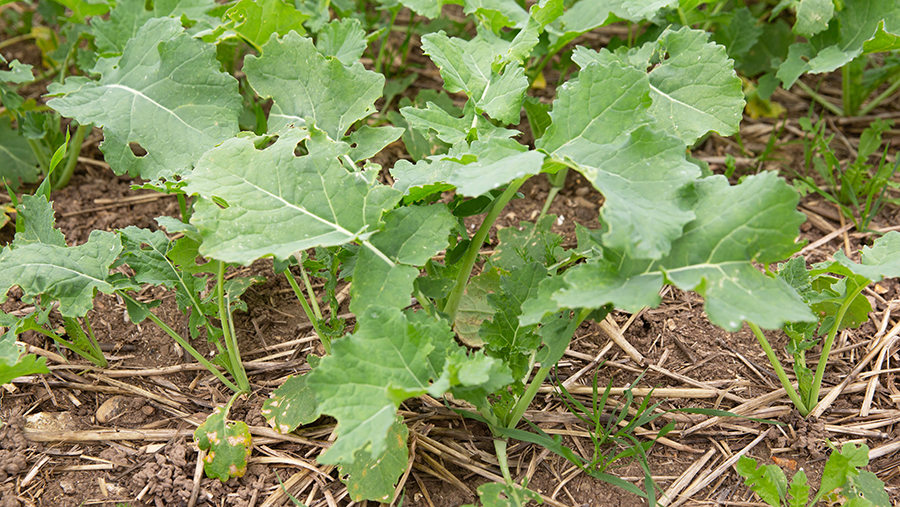 Establishing vigorously growing plants and using companion crops could help oilseed rape growers cope in the future with the drought and pest problems seen in the summer of 2018.

Lack of moisture made slow-moving crops more vulnerable to cabbage stem flea beetle damage as they emerged, while pyrethroid sprays proved largely ineffective due to high levels of resistance.

“With resistance levels to pyrethroids at 80% and above, you have to ask whether getting around 7% control was worth it. The jury is still out on whether adjuvants improve this and there was also the impact on beneficials to weigh up,” he said

Mr McAuley added early drilling proved beneficial, before 15 August, as did shallow seed placement to a maximum depth of 15mm, while companion crops helped with rooting and providing relief from flea beetle attack.

“It’s difficult to say if berseem clover has a pest benefit but white mustard is absorbing flea beetle pressure on some farms. Used with Clearfield oilseed rape, the post-emergence spray takes out the mustard once it has done its job,” he said.

Pre-emergence herbicides for oilseed rape are risky and expensive, especially in a dry year, which is why new post-emergence herbicide Belkar is an interesting management tool where there’s a range of broad-leaved weeds, he added.

“It seems to have some unofficial activity on charlock too. The cost is about the same as using a pre-emergence treatment followed by AstroKerb,” said Mr McAuley.

Exploiting the flea beetle’s preference for young plants by leaving a field of oilseed rape volunteers adjacent to a new crop is one of the strategies being tested.

As trap crops have been shown to reduce beetle damage, and AHDB-funded work is looking at the timing of volunteer destruction.

“There are always lower beetle numbers and less damage in the newly-drilled crop when nearby volunteers have been left to grow into September.

Combined with a slightly later drilling date of the new crop, there has been a consistent effect from this technique,” he said.

Defoliation of oilseed rape crops is also being investigated by Dr White, after work showed mowing the crop down to 50-75mm had a significant effect on larvae numbers, reducing them by as much as 55%.

He is testing three defoliation timings – December, January and March – to see which is the most practical for growers.

“Grazing or defoliation could be very effective where larvae populations are high. We will be testing this over the winter with an Innovative Farmer field lab,” he said.

Varietal tolerance, seed rate and drilling date have also been studied, with no differences in crop damage or larvae numbers being seen between varieties.

Varietal traits, such as vigour, may have a role, while increasing seed rates has given benefits but may raise flea beetle pressure the following year. Early drilling has helped avoid damage but have also given rise to more larvae per plant.

“That’s the sting in the tail. Some cultural methods may make the problem worse in the following year. It’s been very mild this year, so the larvae issue is a big problem,” said Dr White.

Broad-leaved weed activity in a rotation has suffered from the loss of  IPU, trifluralin and chlorotoluron, while no-tillage and a reluctance to use pre-emergence herbicides have left gaps in the weed spectrum.

As a result, weed species such as vulpia grasses are becoming more common, while others such as crane’s bill, fool’s parsley, shepherd’s needle and groundsel are also on the rise.

“Less control in the cereals part of the rotation is part of the story, while earlier oilseed rape drilling with no-till approaches is another,” reports John Cussans of crop consultants Niab.

The balance between risk and reward with oilseed rape means there’s reluctance to use expensive pre-emergence herbicides.

The move to no-till is also increasing reliance on glyphosate and some weeds are more difficult to control.

“Vulpia, or rat’s tail fescue, is a good example. Rosebay willow-herb is another. We are seeing changes taking place so it is important to have good records. Weed knowledge is going to become more important,” he said.

There are developments which are helping growers with the risk/reward conundrum, such as the Clearfield system and new post-emergence herbicide Belkar.

“Both of these offer a different approach to weed management and could help where broad-leaved weeds are threatening the crop,” he said. 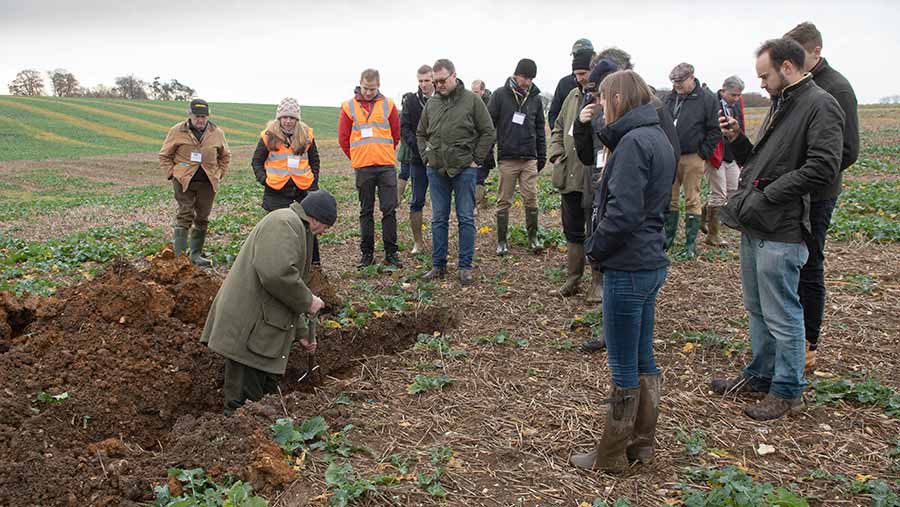 New post-emergence herbicide Belkar (arylex+picloram) is working well where event host and Bedfordshire grower Philip Woods has used it in a 6ha area of a 54ha field of Extrovert.

He is also comparing it to the Clearfield system, having drilled 12ha of Imperial  in the same field and used Cleravo herbicide, where charlock is an issue.

“Both systems are an option for this farm, although we still have to use a graminicide for volunteers and any blackgrass,” he said.

A range of broad-leaved weeds has been controlled by Belkar, including crane’s bill, cleavers, fumitory and shepherd’s purse, from a single 0.5l/ha application made on October 20, when the crop was at six true leaves.

His agronomist, Mr McAuley, suggested there may be some room with rates, with 0.3l/ha being suitable for softer weed targets. He also noted it has had an effect on charlock, despite the weed not being on the label.

Making good decisions that protect farm businesses from risk is now every bit as important as driving up output or improving efficiency.

Corteva Agriscience’s product pipeline has been developed to help farmers be more successful in what they do and Arylex Active in oilseed rape facilitates a revolutionary approach.

It allows growers to see a crop emerge before spending any money on controlling the weeds within it. No more high-risk front loading of crop protection products, an end to spray and pray.

The farmers who will be successful in the future are the ones who can see a new way forward & we’re looking forward to seeing how this project evolves throughout the course of the year.

Thanks to Corteva Agriscience for its sponsorship, which enabled us to run OSR Masters. Farmers Weekly had complete editorial control of this report.