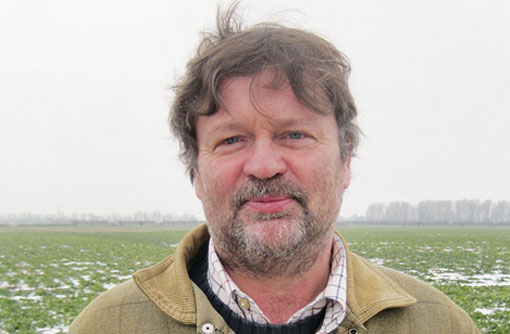 There’s no sign of any yield penalty at John Hawthorne’s Flawborough Farms near Newark, even though oilseed rape is being grown every other year.

A wheat/rape rotation, introduced at the home farm in 1994, was extended across the entire 1,800ha farming business in 2003, and has been in place ever since.

With the help of some agronomic adjustments, a steady increase in the crop’s performance has been the result. In 2011, average oilseed rape yields on the home farm were 4.6t/ha, while across the whole unit they averaged 4.1t/ha.

While soil type undoubtedly had an influence, black-grass control has been the main driver for the rotational emphasis, explains Mr Hawthorne. “Blackgrass is a big problem here and we grow oilseed rape so that we can use Kerb (propyzamide) to get good control of the weed.”

The crop was first introduced to the farm in the 1970s, he reports. “When we started out, it was grown one year in four, but that has changed over time. We’ve never got on with second wheats, as we are mainly on heavy clay and riverside alluvial soils.”

He admits that oilseed rape yields struggled to get above 3t/ha for a while. “But since we’ve changed our method of establishment, reduced seed rates and amended our agronomy accordingly, yields and oil contents have improved.”

The agronomy changes have included using higher rates of nitrogen, as well as late foliar nitrogen, and increasing the amount of fungicide applied. Canopy management techniques have also been adopted.

“We’re feeding and managing the crop better than we were. We’ve also stopped using farm-saved seed, as there was too much to do at harvest time, and we’re making good use of seed treatments and micronutrients.”

Varieties have played their part too, with both hybrids and conventional types being grown. “We were happy to start growing hybrids when Excalibur came along, but we still have both types on the farm. DK Cabernet has been the top yielder here for the last two seasons.”

The phoma rating of any potential variety is his key consideration. “It’s our main disease challenge. Light leaf spot doesn’t bother us and we’ve only had sclerotinia a couple of times, although we tend to spray for it as a matter of course.”

Mr Hawthorne spent £96/ha on fungicides last year. “We always spray for phoma, usually twice, and will do either one or two sclerotinia treatments, depending on the risk and the weather.”

He believes that the farm’s previous use of the Autocast establishment method allowed phoma to get a hold. “It was fantastic for blackgrass control but it allowed the crops to develop very rapidly. In some instances, the lower part of the stem, the hypercotle, split. That gave the disease an easy entry route.”

This year, his first phoma spray went on at the end of October. “With hindsight, I should have waited for a while. But it was so dry that the crop didn’t start growing until October and, as small plants are more vulnerable, I didn’t want to leave them unprotected.”

Since the demise of Autocasting, he has moved to subsoiler methods of establishment, so that there is minimal soil disturbance. “That’s very important for the blackgrass control that we can achieve with Kerb.”

Nitrogen rates have increased, from 160kg/ha of N to around 260kg/ha, he reports. “We’ve also started using late foliar nitrogen and putting all the phosphate on ahead of the rape crop.”

Seed rates have been reduced by a third to 40 seeds/sq m and growth promoting seed treatments are used, to ensure that crops get off to a good start. “We also pay more attention to micronutrients than we used to.”

Controlled Traffic Farming is being introduced to Flawborough Farms this year and Mr Hawthorne believes it will bring further benefits. “We’ll be able to place the fertiliser at drilling, without disturbing the soil between the rows. That’ll help to conserve moisture and get a good blackgrass flush.”

Be aware that the stem canker pathogen has the potential to change rapidly, warns Bruce Fitt of the University of Hertfordshire.

Fortunately, there’s no evidence of any fungicide resistance in the pathogen to date and the RLM7 genetic resistance, which has been out there for a while, hasn’t broken down, he adds.

“It produces sexual spores, which allows more rapid genetic recombination, and the spores are produced over a long period of time,” he explains. “Both of these things give it an advantage.”

The phoma forecast didn’t work well last autumn because it was so dry, notes Prof Fitt. “It’s a weather-based model and it only takes account of conditions up until the end of September. In 2011, ascospore release didn’t occur until December.”

Of the other oilseed rape diseases, light leaf spot is causing more of a problem than it was, he admits. “That could be partly due to the fact that there is resistance to some of the fungicides now. But the varietal resistance is holding up.”

Sclerotinia isn’t normally a problem and can be controlled with timely fungicides, he notes. “The last bad year was 2007. Spore numbers were very high then, so it is possible to get advance warning.”

The soil-borne diseases, Verticillium wilt and clubroot, could be problems waiting to happen, he predicts. “The issue with both is that inoculum builds up over a long period of time.”

Better agronomy and a shift to more reliable varieties have helped to improve the performance of the UK oilseed rape crop, with both yields and oil contents rising, believes Matthew Clarke, oilseed rape breeder with Dekalb.

“But as it’s become a major crop, there has been an inevitable increase in disease pressure,” he adds. “There’s far more pressure on rotations, yet very few trials are done on short rotations. That’s why a variety’s disease ratings don’t always reflect reality.”

Having good stem canker and light leaf spot resistance in a variety makes a significant contribution to yield, he stresses.

“If you look at the Recommended List, the phoma ratings have been declining,” he says. “That’s a worry, given the amount of oilseed rape being grown.”

One of Dekalb’s latest introductions to the Recommended List, DK Expower, has a phoma resistance rating of 9, he adds. “But we would still recommend that it is sprayed for phoma, as there’s such pressure on rotations”.