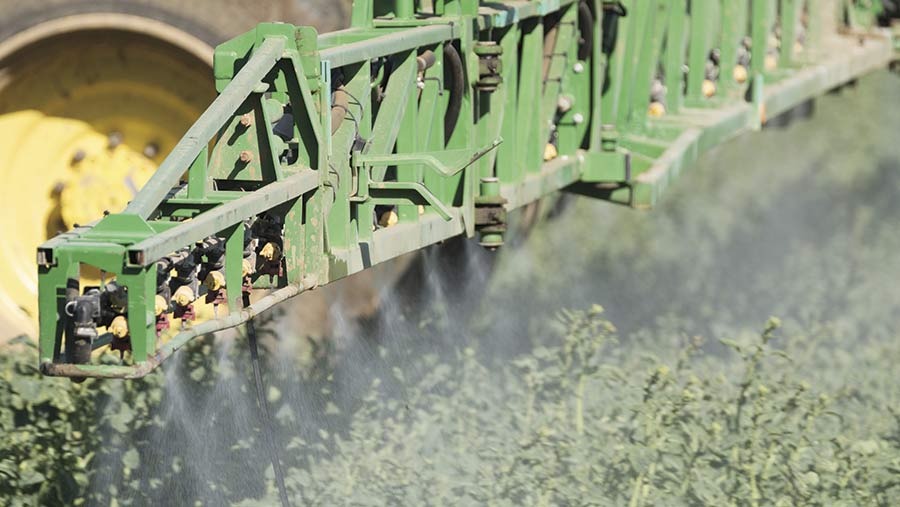 There are three different ways that a growth regulator can increase oilseed rape yields, thereby helping farmers maximise their returns.

Last harvest will be remembered as a good rapeseed year. However, the national average of 3.9t/ha is still well behind AHDB trials, which are yielding 5t/ha and higher.

Experts believe some of this gap is down to a failure to create the ideal canopy to drive yields.

Adas oilseed rape expert Pete Berry believes it is a particular problem when farmers have variable fields and don’t apply a growth regulator to avoid over-regulating the backward areas.

There are three ways an oilseed rape crop with a green area index greater than 0.8 will benefit.

Dr Berry says that for every 5cm reduction in height, there was a 10% reduction in lodging in his trials when applying metconazole before green bud to mid-flowering.

Yield losses of 50% are seen with fully flat crops, but even those leaning at 20-25 degrees at mid-seed fill can have 20% loss. “Therefore, any lodging is bad.”

One problem highlighted by an Adas survey is that a lot of lodging is not visible from the field edge, so is a hidden problem.

“Lodging is being underestimated and so is its impact on yield and quality. Even small angles can have a substantial impact on crop yield.”

The survey in 2012 and 2014 showed nearly one-third of the area was lodged in those years, revealing the high cost to farmers.

When maximising yields, Dr Berry highlights the importance of keeping leaves going longer, ideally two weeks into seed filling. However, if the canopy is too thick, the lower leaves are shaded and can prematurely die.

“That’s why seasons with a sunny April, like last year, tend to deliver higher yields.”

He explains that using a growth regulator reduces the number of flowers on the terminal raceme, therefore cutting the amount of light reflected by flowers and allowing more to penetrate the canopy.

Adas trials show a yield response to metconazole of 0.2t/ha for crops with a green area index of 0.8, while thicker crops with an index of more than 2.0 yielded 0.25t/ha extra.

Both oilseed rape and cereal crops ideally need a root length density of 1.0. Dr Berry says this equates to 1cm of root length for every 1cu cm of soil volume.

However, an Adas survey of 40 crops show that once you go below 40cm depth, rooting is inadequate. “This means in a dry season, crops will be restricted,” he warns.

His research has shown that metconazole increases rooting at depth, by redirecting nutrients below ground.

The most damaging sclerotinia lesions tend to be in the bottom to middle part of the canopy and it is difficult to get fungicides down into this area.

Reducing water volume from 200 litres/ha to 100 litres/ha had an adverse effect on penetration.

Interestingly, using a growth regulator increased the number of droplets and deposition of Tectura (boscalid + metconazole), as it lets more of the mid-flowering sclerotinia spray into the canopy.