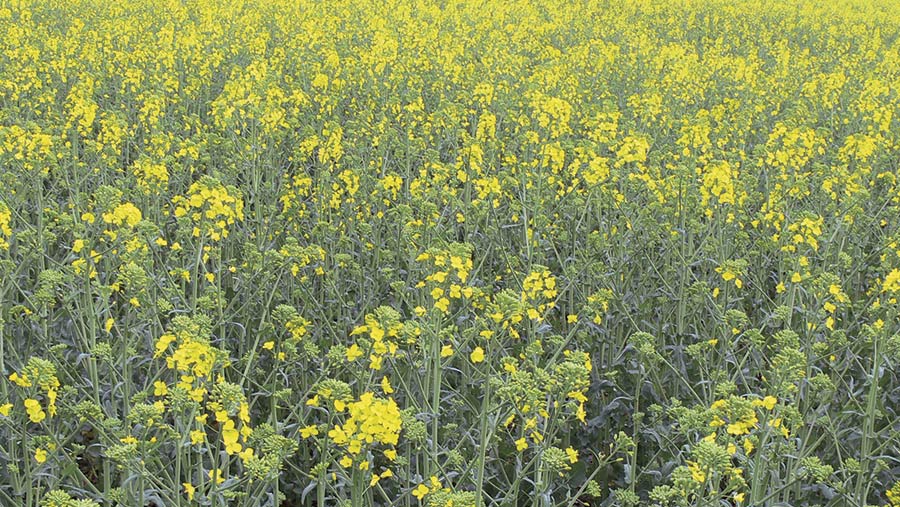 Planting a sacrificial companion crop of mustard at the same time as a Clearfield variety of oilseed rape can reduced cabbage stem flea beetle attacks, according to agronomy group ProCam.

The theory is that mustard, which is a brassica like rapeseed, lures beetles away so the numbers feeding on the oilseed rape are diluted, says the group’s technical director, Tudor Dawkins.

See also: How one OSR candidate variety can fight disease and pests

Once the oilseed is established, the mustard can be removed with Clearfield herbicide Cleravo.

The Clearfield system consists of hybrid rapeseed varieties that are tolerant to the herbicide imazamox.

These varieties have been conventionally bred with natural resistance to this herbicide, and Cleravo contains imazamox and quinmerac, which removes the mustard.

The aim is to get the oilseed rape and mustard to emerge together before spraying off the mustard at the three- to four-leaf stage.

“It is early days, but we are encouraged by the findings to date,” he adds.

One product that contained nutrients and a seaweed extract – Universal Bio – applied at the two-to-four-leaf stage, helped boost early oilseed rape growth by 32%.

“It’s a possible tool to help get the crop up and away so that it is more resilient to cabbage stem flea beetle damage.

“Although it can be used at any time in the early autumn, it seems to work best when used early,” adds Dr Dawkins.

Other tips to help rapid oilseed rape establishment include removing surface trash as this can impair germination in wet conditions, conserving moisture by rolling after drilling, and monitoring to keep on top of slugs.

Without suitable management, flea beetles not only reduce plant vigour, but can take out whole swathes of crop. Dr Dawkins says products such as the pryethroid Hallmark (lambda-cyhalothrin) give the best control.