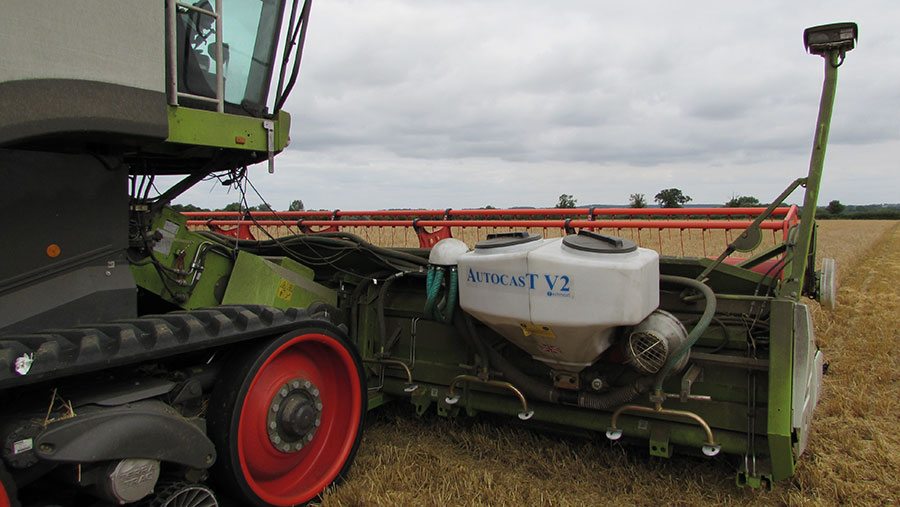 A Northamptonshire farm is sowing oilseed rape when combining the previous cereal crop, cutting costs and getting the rapeseed off to a good early start on its light land.

The technique of bolting an autocast applicator behind the combine header places rapeseed on the ground, which is then covered by chopped straw from the combine.

This approach is also being used to sow catch and cover crops.

Michael Gent, his father, John, and agronomist Damian McAuley, from independent agronomy group Indigro, came up with the method which saves the £50-£60/ha cost of direct-drilling and also conserves vital soil moisture under a bed of chopped straw.

“We need to make sure we go early to get good establishment and mitigate the threat from cabbage stem flea beetle,” says Mr Gent.

Early sowing and moisture retention is vital on the farm’s light land, as early germinating oilseed rape will be more likely to survive flea beetle attacks.

Zero soil disturbance also means a lower chance of the seed-bed drying out.

The trigger to purchase the autocast system was the farm’s proposed move into a Higher Tier Countryside Stewardship scheme, which will include establishing cover crops before growing low-input spring cereals.

The Gent family’s Oundle Lodge, just south of the eponymous town, farms 600ha, of which 500ha is arable with the rest grassland.

The higher tier environmental scheme was chosen as there are rich water meadows on the flood plain of the River Nene.

The farm moved to direct-drilling its oilseed rape in summer 2020 with its own 3m Weaving GD drill, but that entails a separate operation at a cost of about £50-£60/ha.

The farm’s light land produces only moderate oilseed rape yields of about 3t/ha, with this summer’s yield ticking up to 3.2t/ha. So the aim was to reduce costs as much as possible without hitting yields.

Oilseed rape is grown once every four years in the current rotation.

During the summer, the father-and-son team, Mr McAuley and chief tractor driver Ben Wainwright hatched a plan based around broadcasting seed from the combine via an autocaster.

An Autocast V2 applicator was bought from Techneat Engineering, which was mounted on the rear of the 25ft header of the farm’s Claas Vario 660 combine. 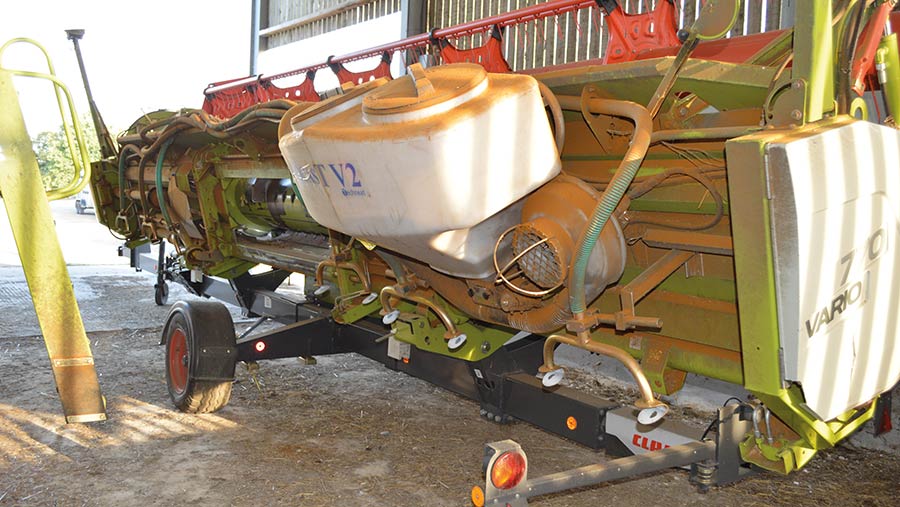 The dual-hopper system of the autocaster allows rapeseed to be placed on the ground along with a companion crop from one hopper, and slug pellets from the other.

In the autocast machine, seed is metered into an airstream which is then distributed to a number of outlets equally spaced across the full width of the combine header. 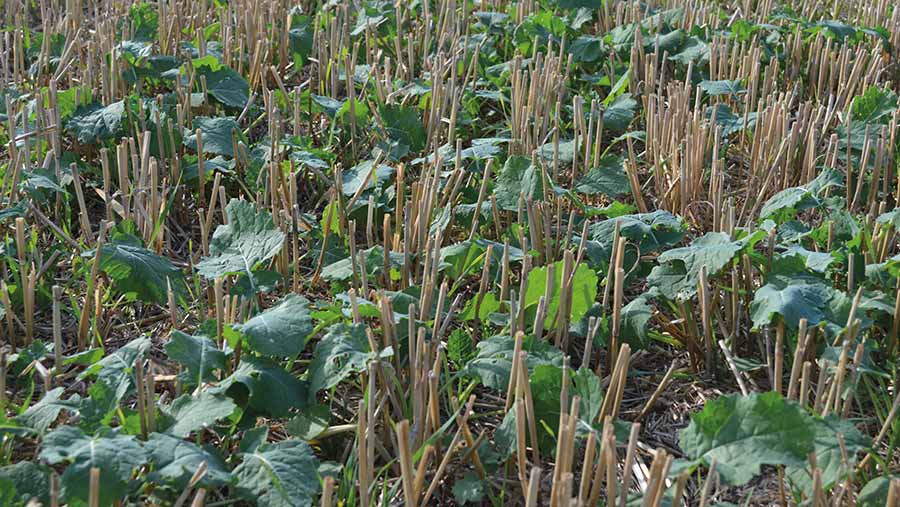 Farm-saved seed of conventional rapeseed variety Campus was used, at a seed rate of 4.5kg/ha.

This was mixed with berseem clover to fix the nitrogen and help the oilseed rape root well, rather than deflecting flea beetle attacks. 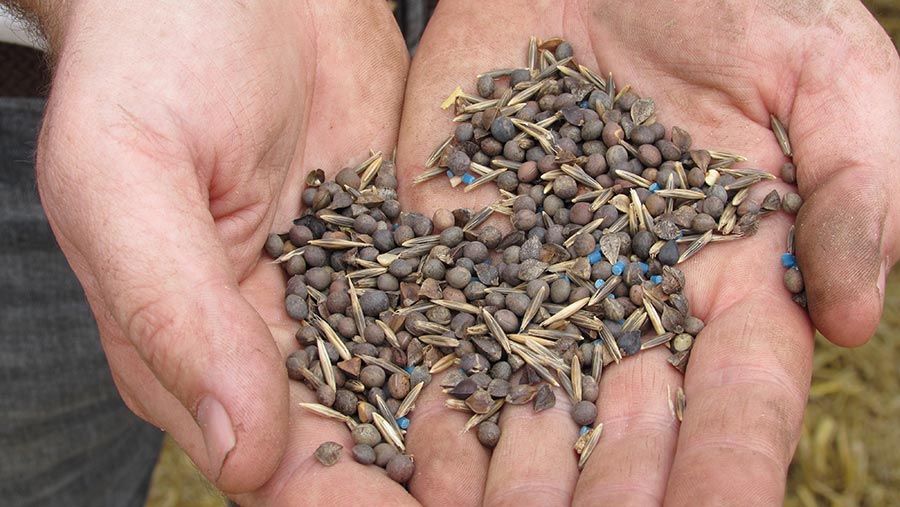 The cereal stubble was cut high, at least 150mm, to create an even spread of chopped straw over the rapeseed/clover seed mix.

The ground was then pressed and rolled to give good seed-to-soil contact and preserve all-important soil moisture.

Some 40ha of oilseed rape sown on the farm in the summer followed winter wheat, and because of the late harvest, the wheat had to be sprayed off with glyphosate to get an early cut of the wheat on 7-8 August.

Mr Gent sees clear advantages from the system such as cutting costs, reducing soil compaction and improving moisture retention under the layer of chopped straw.

This creates a micro-climate beneath the straw, where newly-germinated rapeseed plants can flourish.

He says he has found it difficult in the past to direct-drill rapeseed through such a thick layer of chopped straw. 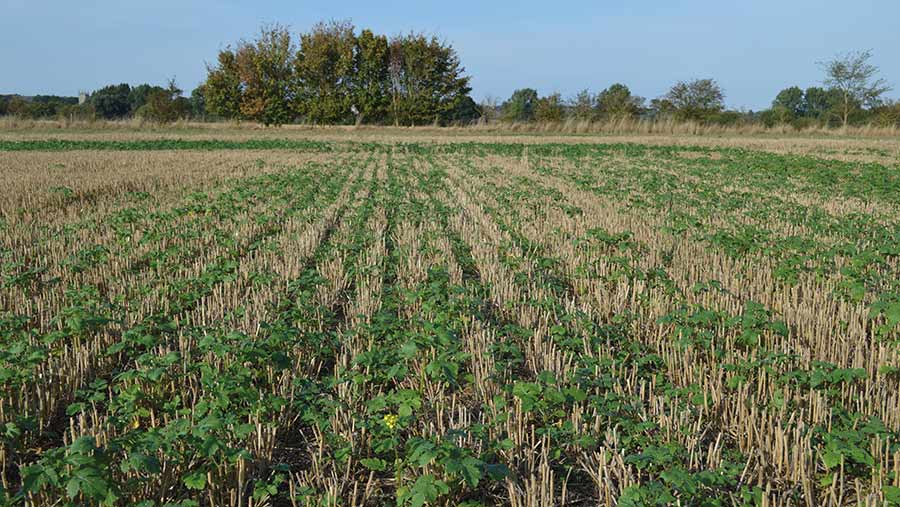 The disadvantage of the system is that there is less control over the date of sowing on the farm, as it depends of the harvest date of the previous cereal crop.

Mr Gent believes the ideal time to sow oilseed rape on the farm is the last week of July to the first week of August.

The business also has another 40ha of oilseed rape on contract-farmed heavier land, which followed winter barley.

The barley was cut in the last week of July, the straw baled and then direct-drilled as soon as possible.

This direct-drilled crop has given slightly better establishment than the autocast crop, which he puts down to the earlier drilling date and the heavier land. Ideally, oilseed rape would follow winter barley on his light land.

The autocast system is also used on the farm to sow mustard as a catch crop between two crops of winter cereals – the seed mix costs less than £10/ha.

Then the next cereal crop is direct-drilled into the mustard.

“We find that with direct-drilling, it is easier to drill into green as the mustard roots keep the soil in a good condition,” he says. 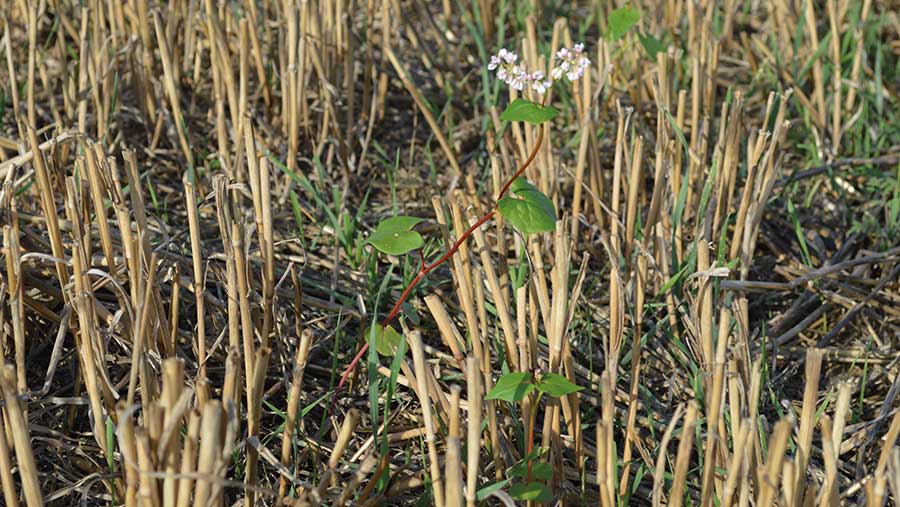 Autocasting has additionally been used to establish 60ha of cover crops in the summer, in anticipation of the stewardship scheme.

The farm is hoping to utilise options within the stewardship scheme, such as the harvesting of low-input cereals (AB14), paying £266/ha a year, and winter cover crops (SW6), paying £116/ha a year.

The cover crops will help improve the farm’s soils and give winter feed for sheep and cattle, as well as bringing in the stewardship money.

Mr Gent says a following crop of spring barley yielding, for example, 6t/ha, will have the equivalent yield of 8t/ha-plus when taking into account the return from the stewardship scheme.