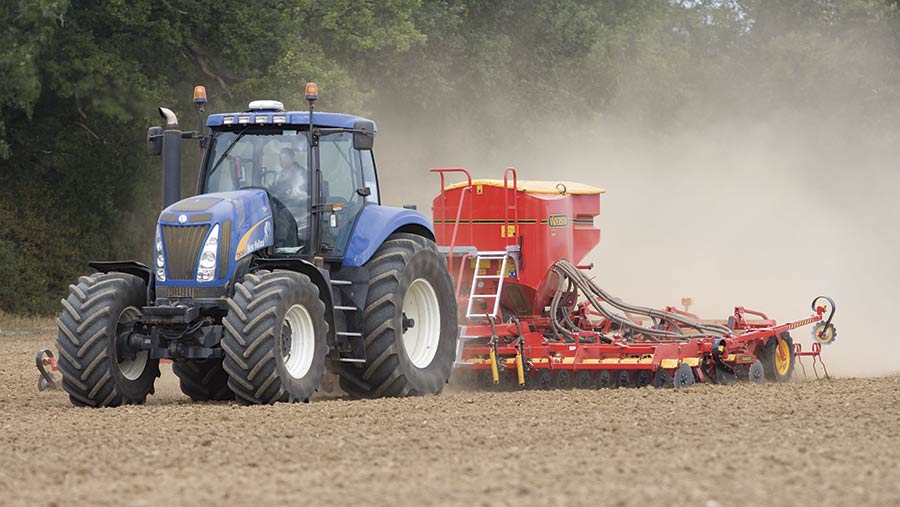 Winter and spring beans are the favourite replacement crops for oilseed rape struck down by drought and pest attacks across south-east England.

More than 10% of the UK rapeseed crop is estimated to have been pulled up after failing to establish and many growers have drilled or plan to drill beans.

The driest October since 1972 and cabbage stem flea beetle attacks have hit oilseed rape crops, with a survey showing 70,000ha has been wiped out in the main English rapeseed-growing area.

Essex grower Nick Cousins has pulled up 46ha of his oilseed rape after only 10% of plants germinated in one of the driest autumns for 30 years.

With little rain since June and none forecast, the hybrid rapeseed variety, which seed cost £90/ha – was abandoned and replaced with winter beans.

Winter wheat is also struggling and crop emergence has been variable at Mr Cousins’ 280ha Dagnets Farm, near Braintree. He delayed drilling because of fears pre-emergence herbicides would not work well in such dry conditions.

”Much of what we planted in October is still sitting there waiting to emerge. We know how to deal with wet conditions, but I have never seen an autumn like this,” he adds.

Only 60% of the farm’s winter wheat was planted up to last weekend, but drilling has restarted again this week.

Kent grower Mark Izard says drought forced a halt to oilseed rape drilling in the summer and he has since opted for winter beans.

Only 36ha of his intended 100ha oilseed rape went into the ground due to drought and then that crop failed on his flinty clay soils at Waddenhall Farm, near Canterbury.

“We took the decision not to drill anymore, it was going in so dry and just not germinating. We couldn’t plough and we were just wearing out metal like no tomorrow,” he says.

Stan Harrison, agronomist with distributor Zantra, says 80% of the 800ha of oilseed rape he manages across Essex and Kent has been written off by drought. He believes beans will be a likely replacement.

“Winter and spring beans or peas will be popular choices. Spring barley is a potential default choice for a lot of farms, although it isn’t a break from cereals and carries a take-all risk,” he says.

Winter oats could be a cereal option for those wanting to avoid problems with take-all, while fallow could give a chance to get good weed control.

In East Anglia, agronomist Andrew Blazey believes spring cropping may be the only option for growers in the worst-affected areas.

Mr Blazey estimates about 1,400ha of oilseed rape has been lost in the parts of Essex, Cambridgeshire and Suffolk which he covers.

“For growers who have spare combine capacity, spring barley is the most popular option as it is a familiar crop to grow,” he says.

Pulses can be difficult to justify financially and a limited choice of herbicides may mean it could be easier to control weeds growing spring barley.

Drought and flea beetle damage has written off 70,000ha of oilseed rape across 18 counties in England this autumn, an independent survey has estimated.

The Association of Independent Crop Consultants (AICC) asked its agronomist members to report the proportion of oilseed rape crops they oversee that had failed to establish.

More than 70 agronomists responded from Northumberland down to Kent, representing about 71% of the total English crop. Traders estimate about 530,000ha of oilseed rape was drilled this autumn in England.

About 40,000ha may have been lost as a result of dry seed-beds and 30,000ha failed because of flea beetle damage.