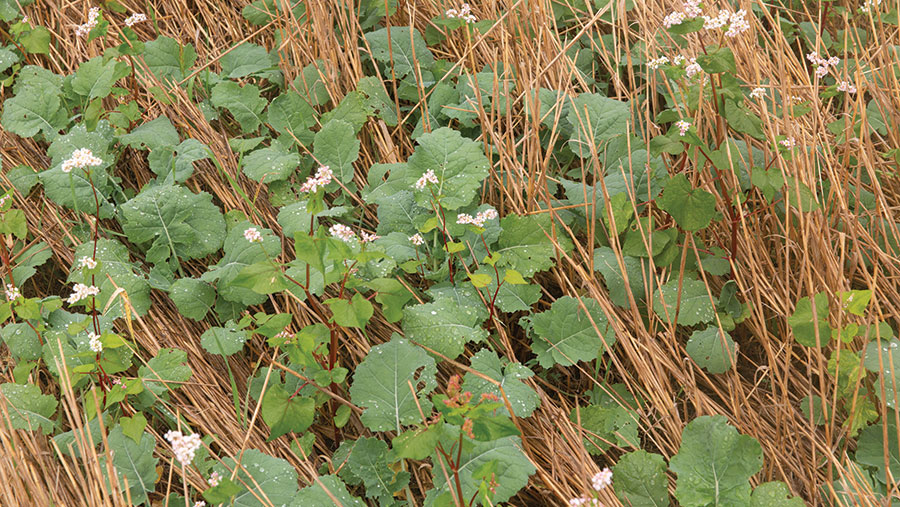 The oilseed rape area is predicted to fall again this summer, as the pest has been resulting in many crops failing to establish.

However, there is some anecdotal evidence that growing a companion crop may help, and agronomy company Agrovista has been conducting a trial.

Based in Draughton, Northamptonshire, Agrovista is investigating the effects of growing berseem clover in conjunction with rapeseed in order to identify successful methods of establishing and growing the crop.

The group’s farming systems research and development advisor, Niall Atkinson, explains how a range of seed treatment applications are also being investigated.

“The purpose of the trial isn’t to find one quick-fix solution, but to show how a combination of factors can work together to get rapeseed established successfully,” he says.

The trial consists of 18 treatment plots of the Clearfield variety Phoenix at 50 seeds/sq m, which were drilled on 29 August and received no post-emergence insecticide applications.

Each plot was 100m long and 30m wide, located within a commercial crop of oilseed rape, which acted as a control, but was unfortunately destroyed by flea beetle attack.

Half the plots were grown in a long winter wheat stubble, and the other half in a standard stubble length, with all straw chopped to create a mulch.

Each plot was then established with and without a companion crop of berseem clover, with Mr Atkinson highlighting how the overall best establishment came from the plots, where both Lumiposa, Integral Pro and berseem clover were used together.

“The berseem clover is the overriding positive contributor, and supporting this with targeted seed treatments really does seem the way to go, protecting and boosting the oilseed rape seedling from the beginning, when it is most vulnerable to damage,” he says. 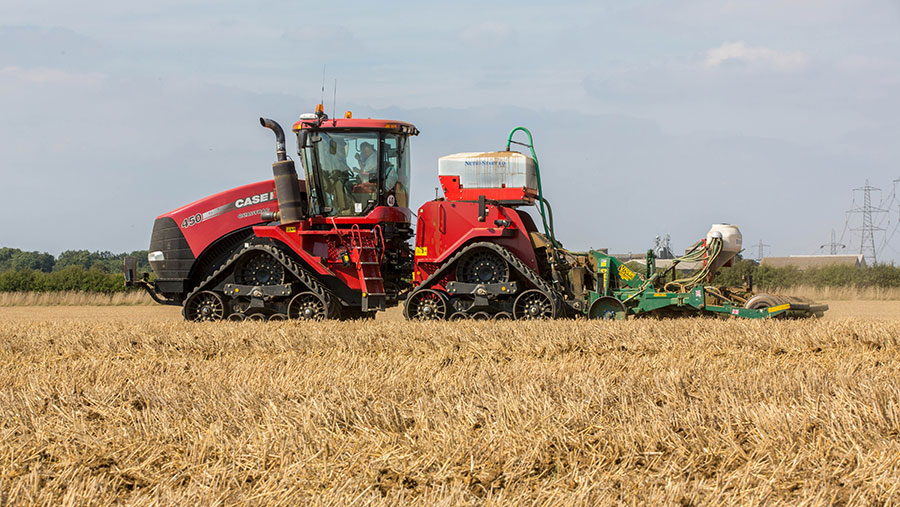 Mr Atkinson explains the benefits of using berseem clover and why companion cropping is forming an integral part of many growers’ oilseed rape production systems.

“The clover develops a fine fibrous root system which helps condition the soil, allowing more rapid and deeper root growth, meaning the rapeseed can get away quicker, so it’s less susceptible to pest attack,” he says.

He highlights why the plant acts as a good companion choice since it doesn’t compete with the rapeseed directly, as it only gets going above ground from October onwards and is also compatible with most, although not all, herbicide sprays.

Berseem clover offers many soil health benefits due to its ability to soak up excess nitrogen which is released back into the soil when the crop dies, when up 30-40 kg/ha of nitrogen can be released.

Another issue which companion cropping can help overcome is the inability of oilseed rape to host mycorrhizal fungi. Other plants growing in the rows can act as a host plant for the fungi, promoting soil health.

Adding other species to the companion crop mix could boost soil health further, but Mr Atkinson warns this strategy could be risky, as species which outcompete rapeseed could be mistakenly introduced, reducing the crop’s ability to withstand pest attack.

When it comes to removing companion crops, Mr Atkinson explains how the correct choice of variety is essential, for instance, selecting those with greater frost susceptibility.

“We grew the clover variety Tabor for easy removal, as it is extremely frost susceptible. The bigger the crop gets, the more susceptible it is to the cold,” he says.

However, last winter’s mild conditions and limited frost development posed the question of how the crop would be removed successfully, without the use of chemical control.

In the end, the winter deluge together with a few late frosts killed off the crop, meaning over-spraying was not required.

If no frosts are forecast, Mr Atkinson suggests an application of the herbicide Astrokerb (aminopyralid + propyzamide) in November to December could be used to destroy the crop.

“If companion crops have not been dealt with by late February to early March then a product such as Galera (clopyralid + picloram) could be used in early spring,” he says.

However, he warns there are tight timings for uses of this product as it must be applied before the green bud stage of oilseed rape.

There is a suggestion that leaving longer stubble or a carpet of chopped straw residue on the surface may help combat cabbage stem flea beetle, although Niall Atkinson adds that this needs further investigation.

One possibility is that the the stubble means there is no bare soil, which could be attracting the flea beetle, which can differenciate between green and brown. Possibly it helps with moisture conservation, or maybe it is a combination of factors.

The trial looked at establishing with a HE-VA into a carpet of chopped residue while the Weaving GD direct drill works better in the long straw stubble. “We literally snipped the heads off leaving a very long stubble, not unlike using a stripper header,” says Mr Atkinson

Fourth generation farmer Peter Hitchcock is trialling a companion crop of buckwheat on 10ha of his oilseed rape crop this year, at Stocking Pelham Hall Farm on the Hertfordshire/Essex border.

The farm, which grows 830ha of combinable crops has been hit hard by flea beetle infestations since the loss of neonicotinoid seed dressing treatments in 2018, with just 55ha of the crop now planted, down from 200ha previously.

A range of techniques have been implemented on the farm to help combat the pest attacks, including early drilling, leaving cereal stubble as long as possible, using hybrid varieties for vigour and quick establishment and a full dose of nitrogen in the autumn.

“By leaving residue and direct drilling we hope to make it more difficult for flea beetle to find the oilseed rape, as the beetles can distinguish between green and brown colours,” explains Mr Hitchcock. 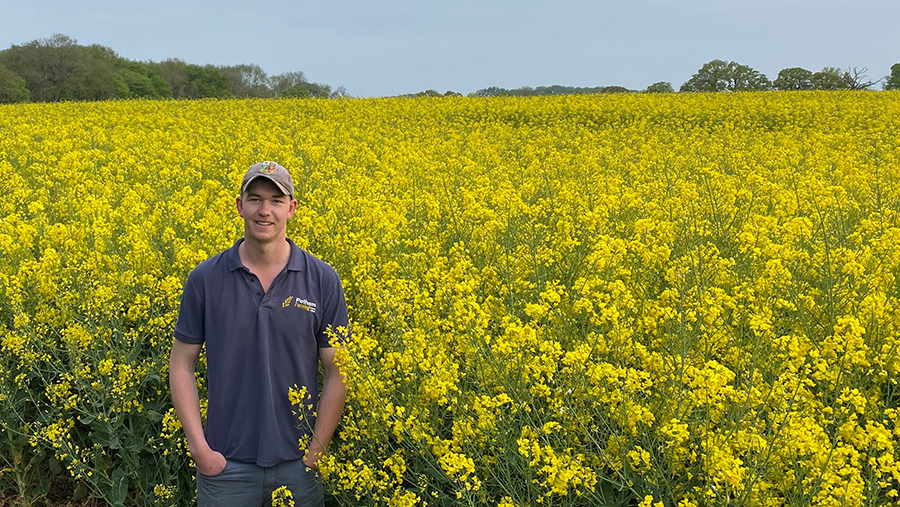 Buckwheat
The companion crop mix was planted on 4 August last year, direct drilled with a Sumo DD drill with a seed rate of 9kg/ha for the buckwheat and 2.7kg/ha for the rapeseed.

Mr Hitchcock is impressed with how the buckwheat has performed so far, and says he regrets not planting more, as the companion cropped area is now a foot taller and in fuller flower than the main crop.

“It really has taken us by surprise. All winter we were looking at the buckwheat and were worried that it was not going to perform as we hoped, but now, you can clearly see a definitive line between the trial and our main crop,” he adds.

Mr Hitchcock believes the buckwheat acts as a distraction to the flea beetle by disguising the rapeseed. The plant also acts as a great scavenger of phosphate, making it more readily available in the oilseed rape’s rooting zone.

“We are also considering adding berseem clover to the mix next year, to promote our soil health further with the help of the clover’s strong rooting potential,” he concludes.