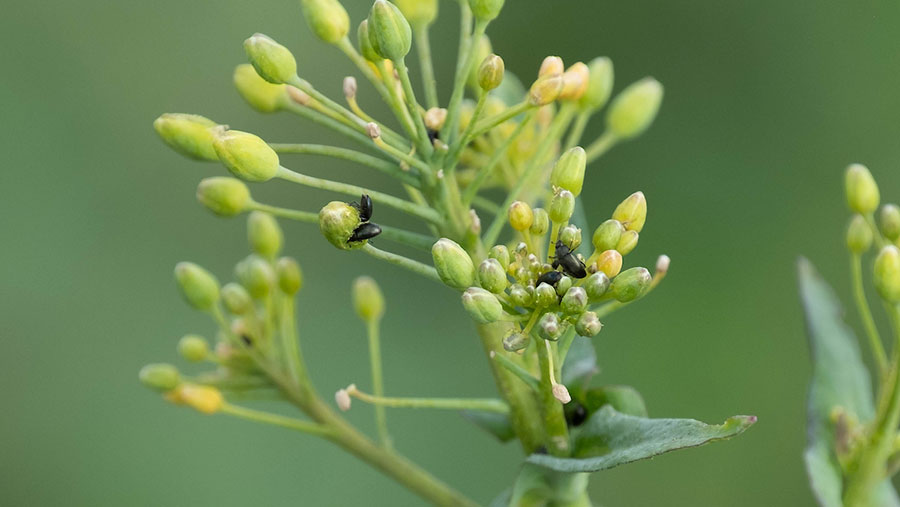 Cabbage stem flea beetle has changed the way that oilseed rape is perceived and after another very challenging year, it’s easy to understand why the crop has been getting such a bad press.

All the experts agree – there is no silver bullet. But attention to detail, wider rotations and earlier drilling dates have all taken some of the risk away.

Techniques such as companion cropping and defoliation have also given help to crops at crucial growth stages.

These are some of the recommendations from experts at Farmers Weekly’s recent OSR Masters event. 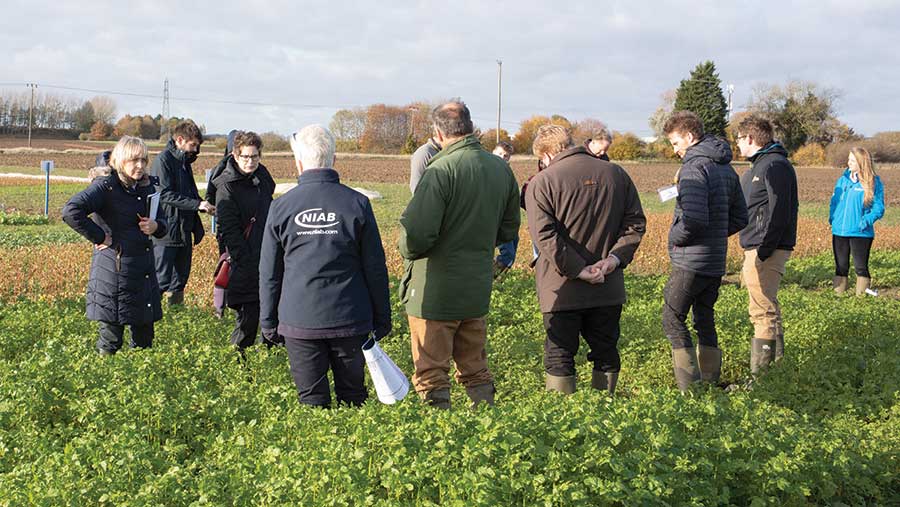 Defoliating an oilseed rape crop before it goes into stem extension has given up to a 55% reduction in larvae in ADAS trials. Here are the key findings:

Oilseed rape varieties selected for the flea beetle era should have the following characteristics:-

Niab work on companion cropping for the past five years has looked at a number of species, both alone and in combination, to see whether they can help reduce flea beetle feeding.

Having investigated white mustard, a brassica mix, buckwheat, fenugreek and spring beans, and a legume mix, the best results in terms of preventing feeding damage have come from white mustard.

“Of course, there are other good reasons for companion cropping, but our focus in this trial was to see if they could help reduce flea beetle damage.”

The ideal companions have the following characteristics:

Herefordshire farm manager Steve Klenk (pictured below right) is giving his struggling oilseed rape crop until Christmas to see whether it’s worth keeping.

Until this year, flea beetle hadn’t been a problem at 1,100ha Garnstone Farms, with oilseed rape performing well from direct drilling in a wide and diverse rotation, where there’s a focus on soil health. 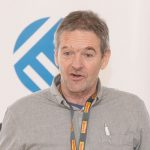 A policy of avoiding early drilling and preventing crops from getting too big before the winter has always served him well in the past, with a target sowing date of the first week in September producing yields in excess of 4.0t/ha.

This year, however, the drilling operation coincided with the peak flea beetle migration. As a result, he has already lost one quarter of his 116ha of oilseed rape and is not confident that the remainder will make it.

“The surviving crops are all shot-holed,” he says. “They’re too small to graze with sheep to try and get rid of larvae and we’ve had so much rain that we couldn’t travel.”

Chicken muck was applied post-drilling and digestate went on through a dribble bar to give the crop a helping hand. Insecticides, which Mr Klenk prefers to avoid, made no difference.

Companion crops are always grown with his oilseed rape, with clover, buckwheat and phacelia being used – broadcast in some fields, with others being drilled inter-row and down the row.

This year, however, their inclusion hasn’t prevented flea beetle feeding, due to very high pest numbers, he confirms.

“The question now is will I grow oilseed rape again,” he says. “I am an eternal optimist, but having bought in the seed this year, I have incurred costs, even with low seed rates and no pre-emergence herbicides.”

Mr Klenk believes the crop has got more difficult and more expensive to grow since his first experience with it in 1978.

“We’ve done everything that we can – from widening the rotation, changing varieties and improving soil health. The only option still open to us is to bring the drilling date forward.”

Don’t be handicapped by tradition, says Cambridgeshire grower David White (pictured below right), who has taken a companion cropping idea he saw in France and introduced it successfully at Hawk Mill Farms.

Since moving to conservation agriculture four years ago, he has always had other species growing alongside his oilseed rape – not just for pest control, but for diversity and soil biology reasons too. 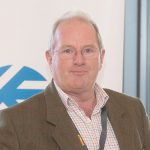 Having started his companion cropping journey by including a mixture of buckwheat, berseem clover and vetches in 2015, he was dismayed to lose a third of his oilseed rape crop to flea beetle in that year.

Undeterred, he continued to experiment and noticed that planting a cover crop with oilseed rape worked against his expectations in 2016.

Then, while on a trip to France, Mr White saw that beans were being grown as the standard companion crop in oilseed rape.

So last year, he drilled spring beans with his rape crop at the beginning of August, with both establishing well.

“The beans were very tall by early November and I did wonder if they were growing at the expense of the rape,” he admits.

Having held his nerve, a timely application of Astrokerb (aminopyralid + propyzamide) bought the beans under control and left some healthy rapeseed plants, which he suspects were helped by the good rooting ability of beans.

“I had some soil cores done which showed that there was 20kg/ha more available nitrogen where the beans had been,” he reveals.

Flea beetle larvae numbers were reduced – there were 10 times more larvae where beans hadn’t been used. Insecticides weren’t required and herbicide use was restricted to one graminicide.

He suggests a spring bean seed rate of 70 seeds and aims for 10 bean plants/sq m in the oilseed rape. “We achieved a slightly better yield where the beans were grown,” he reports.

This year, he has a trial looking at 19 different companions, being grown in 12x24m plots. He also plans to try leaving some of the companion plant species in the crop, so that they can fix nitrogen and keep the soil biology going.

“You have to be bold to make a difference,” he says.

Grazing off an oilseed rape crop with sheep last year proved to be a good way of dealing with plants that were knee-high by November and didn’t reduce yields, reveals Yorkshire farmer Peter Trickett (pictured right). 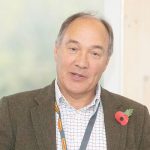 Putting a sheep flock on the crop from mid-November to mid-December and moving them every two to three days helped to get the crop back under control, without the need for plant growth regulators or a change in crop management.

“Grazing it off did change the crop, it was 30cm shorter at flowering and a bit later to reach key timings. But the management of it didn’t alter,” he says.

The final yield was 4.64t/ha, slightly more than his ungrazed crops.

The sheep did very well on it, he recalls. “Grazing is not like mowing. The sheep will do some damage with their feet, so we controlled them with back fencing and moved them on to fresh crop regularly.”

It wasn’t done for flea beetle reasons, he points out, although it may be used to reduce larvae numbers in future.

“Given the threat, we will be drilling as early as possible and aiming for a very strong crop. Grazing it provides free food for the sheep, keeps the nutrients in the field and reduces the need for chemical solutions.”

Pigeons weren’t a problem either, he confirms. “They chose to hammer the poorer bits of our ungrazed crop.”

At Rothamsted, PhD student Patricia Ortega-Ramos has been working on natural enemies of flea beetles and has identified Microctonus brassicae, a female parasitoid which lays its eggs in adult beetles, with the larvae then feeding inside them. The beetles die as the larvae exit.

Found in 70% of UK oilseed rape fields, the current parasitisation rate is 7% – something which is expected to rise if pyrethroids aren’t used.

At CABI, a fungal isolate has shown to give very good results on both adults and larvae, with a high kill rate, reports Jenna Ross of CHAP.

Work will now concentrate on how to formulate the promising biopesticide for best results, so that it can be used in practical situations to control the pest. “It may be in a seed treatment or a foliar application,” she says.