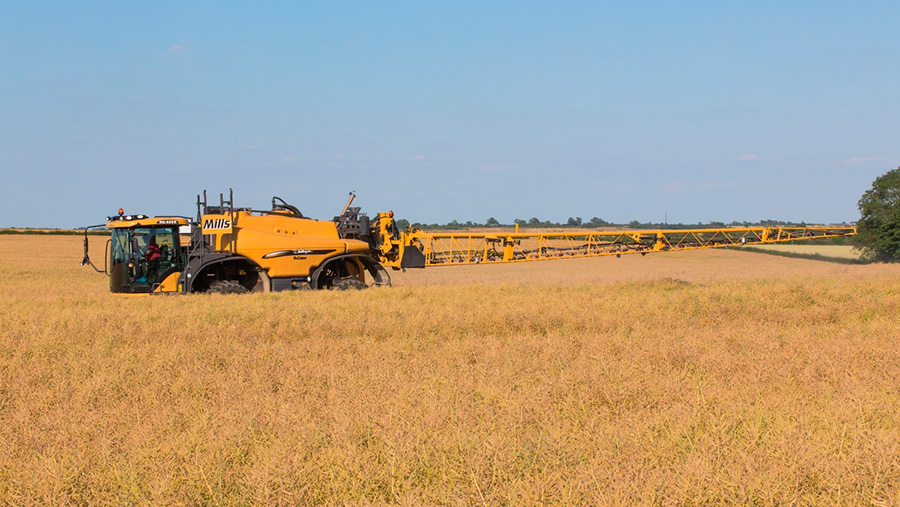 Oilseed rape desiccation using glyphosate for modern hybrid varieties should be timed later than that used in the past for traditional conventional varieties.

“Both genetics and planting practice have changed. As well as the adoption of hybrids and the use of lower seed rates, a significant area of the crop is now planted in wide rows, so the plants tend to have a different shape,” he says.

Newer hybrids have far thicker stems with more branching than conventional varieties, so they can be more demanding when it comes to desiccation.

This is because a higher proportion of crop yield comes from the side branches, which mature significantly later than the main raceme, while these side branches have seed with a 5% higher moisture content than those in the centre.

As a result, he says growers should not be tempted to go in with glyphosate too early in an attempt to hurry the harvest.

“Holding back with the sprayer will not delay combining. In fact, it allows high potential crops to maximise both yield and oil content,” he says.

Varieties with pod shatter resistance will be a particular beneficiary of this approach, as seed losses are reduced in the run up to harvest, so there is less risk from later applications.

Desiccating too early will simply cause the stems to take longer to dry, he warns.

“It doesn’t mean earlier combining and it can restrict the amount of oil that is formed, as that process takes place quite late in seed fill. It also increases the risk of red seed at harvest,” he adds.

Under these circumstances, he suggests that spray timing is based on the assessments of pods from the area of the crop where the bulk of the yield is being carried, not just the main raceme.

“You need to take a representative sample of 20 pods, checking for the tell-tale change in seed colour from green to brown, before finalising spray timing,” he says.

Where conventional varieties are being grown, these 20 pods should come from the middle of the main raceme, and growers should opt for pods from where most of the yield will originate.

Other recommendations include using the latest Roundup brands, such as Roundup PowerMax and Roundup Flex, which offer more reliable uptake and translocation in challenging weather, including one hour rainfastness.

“Use water volumes of 200-250l/ha in thick or leaning crops, and spray early in the day so that you make best use of moisture for uptake. Adjust the boom so that you get the best spray pattern coverage and use low drift nozzles,” he says.

Summer weather has been unpredictable in recent years, making spray operations more tricky, but with an element of planning, growers can be sure of getting a reliable desiccation result, he says.

Glyphosate use in oilseed rape

About two-thirds of the UK oilseed rape crop is treated with glyphosate preharvest.

Only if very settled hot summer weather prevails for weeks is it deemed not necessary to desiccate the crop ahead of combining. Alternatives to desiccation include swathing and direct combining.

In contrast, a maximum 8% of the UK wheat crop is treated – usually because of a wet and difficult harvest. Likewise, any barley desiccation is a function of the weather.