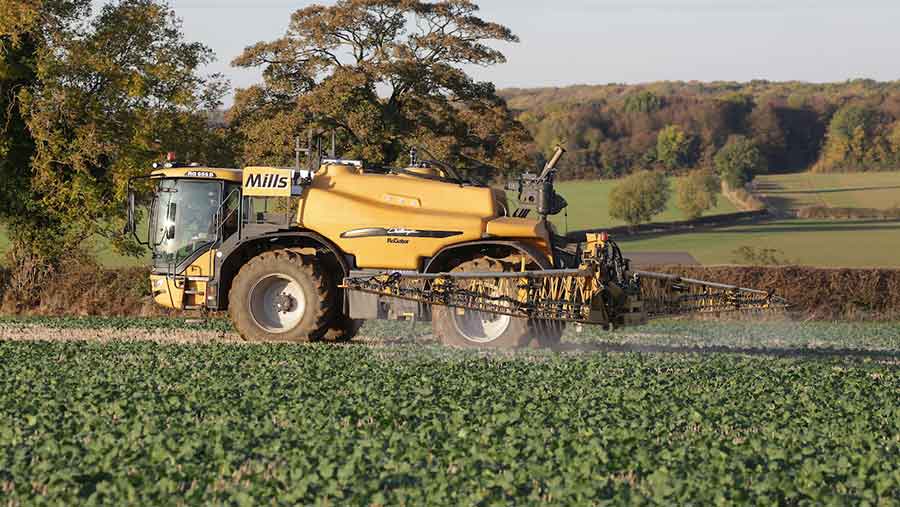 Light leaf spot is the most yield-sapping disease of oilseed rape, with symptoms often being seen in the field only from mid- to late November.

Early diagnosis of this disease can be difficult as it is often confused with fertiliser scorch or frost damage, but detecting the early signs is essential so that appropriate fungicide treatment can be timed correctly to prevent its spread.

We look at the disease’s lifecycle and the best control strategies to prevent crop damage.

Light leaf spot, like septoria in wheat, is polycyclic which means several infection cycles can occur in a season. The fungus survives between crops on infected debris and produces fruiting bodies called apothecia.

Wind dispersed ascospores are released from mature apothecia during the autumn and can initiate an epidemic in newly emerged oilseed rape crops, which may be several miles from the initial source.

The first symptoms appear on the leaves, often during late November to early December, and may easily be missed. The pathogen is subsequently spread by rain splash to neighbouring plants.

The latent period – the phase after infection by spores and before symptoms show – is typically anything from 14 to 30 days. At 4C it tends to be nearer 30 days and at 15C, the former. Above 20C, development of the pathogen is inhibited.

Plants affected by the disease in the autumn are more susceptible to frost damage, and extensive plant loss may occur during a hard winter if the crop is severely infected. A second flush of ascospores may be produced from apothecia that form on dead leaves in the late spring. 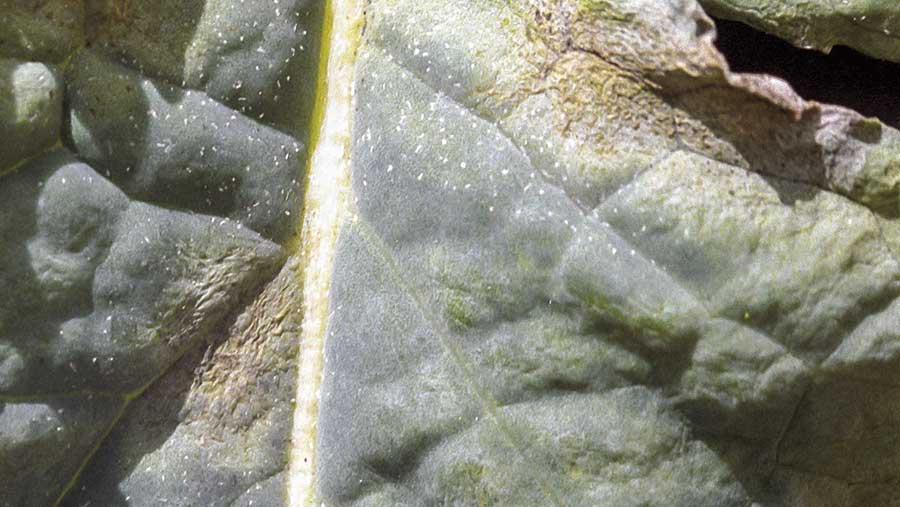 Symptoms of spotting – difficult to see on wet leaves – appear from late autumn, and can be confused with other diseases, fertiliser scorch or frost damage. The pathogen is quickly and easily diagnosed if leaves are incubated by placing them in polythene bags and storing them at room temperature for three to four days.

Pale green lesions appear during November/December. These later take on a mealy appearance without a defined edge. Tiny white spore droplets are produced, and look a little like grains of salt.

Severe infections can cause leaves to become twisted and distorted. Stems and pods may also become infected and the resulting lesions appear brown or purplish with associated black speckling around the edge.

Although light leaf spot has historically been more severe in Scotland and northern England, the disease is now as prevalent in the majority of oilseed rape crops in the south of England

Wet weather is conducive to the disease spread while some varieties are relatively susceptible to the disease. There are also concerns over variable sensitivity to azole fungicides, though there is no evidence of fungicide breakdown in the field.

Some varieties have good genetic resistance to another disease, phoma stem canker, but not necessarily to light leaf spot. An initial first phoma spray should protect against light leaf spot, but this offers a limited period of protection, so there may be a need for a follow-up spray.

Combining genetic resistance with well-timed fungicide applications is the best approach to controlling light leaf spot. Avoid varieties with disease ratings of below 6 where the risk is considered high. Also, ploughing infected oilseed rape stubbles and delaying sowing may help.

Agrochemical control relies mainly on azole fungicides, which also control phoma. There is no threshold for treatment of light leaf spot – the general advice is to spray as soon as you see symptoms, to protect newly-expanding leaf tissue and growing points.

There is a good yield response to two well-timed protectant treatments in AHDB-funded fungicide performance trials. Ideally, the disease should be targeted in November, but growers should monitor and treat as considered necessary, depending on the risk, the weather and symptom development.

A key factor in disease development is poor fungicide timing. Treatments cannot eradicate lesions and offer only around three weeks of protection. Do not wait until stem extension to apply the second application.

Growers need to monitor crops regularly from January onwards. A further application may be required to protect the pods if the disease is still active at flowering.

Growers should use azole fungicide based on either prothioconazole or tebuconazole, or a mixture of the two to protect against the disease.

There is no evidence that full label rates are statistically better than half rates in terms of disease control under moderate disease pressure where timing is optimal. Under high disease pressure or to aid canopy management, three-quarter to full rates could be appropriate.