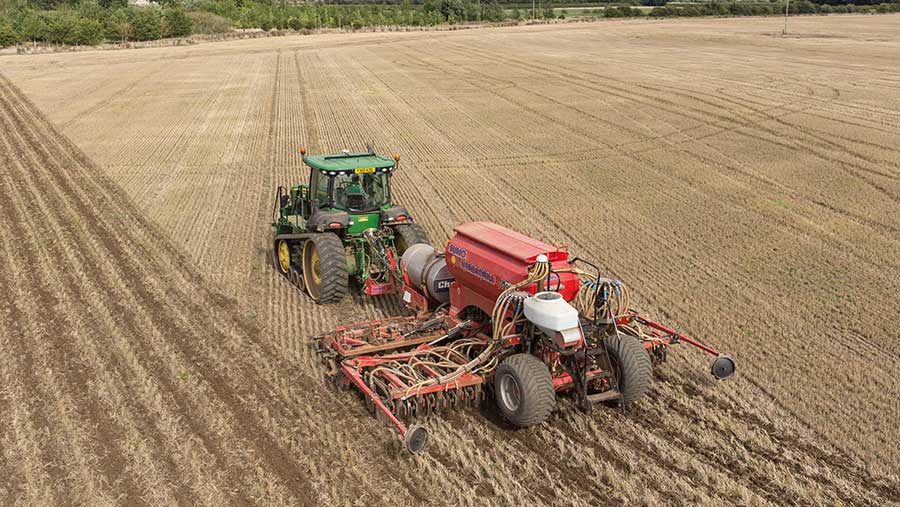 Nearly two-thirds of oilseed rape crops are better established this autumn as many growers have moved to earlier drilling to avoid the ravages of cabbage stem flea beetles.

These were the main findings of a nationwide survey of 170 growers across England, Scotland and Wales, covering more than 15,000ha of rapeseed by hybrid oilseed rape breeder Dekalb, which is part of Bayer.

“If growers drill early into moisture then the pressure of the flea beetles is less, and this is giving them more confidence in the crop,” he tells Farmers Weekly.

The area of oilseed rape is forecast to have risen this autumn after falling to the lowest level in a decade last season, with the lowest rapeseed harvest for 32 years seen at harvest 2021.

Major seed supplier United Oilseeds has estimated the rapeseed area is up nearly 32% at 367,000ha this autumn, after official Defra figures showed the UK harvested its lowest rapeseed crop since 1989 at 977,000t last summer.

The oilseed rape area has slipped from a high at harvest 2012 of 756,000ha due largely to flea beetle damage problems and dry weather at drilling and crop establishment.

As UK processors can crush up to 2m tonnes of rapeseed annually, this shortage of domestic rapeseed has led to prices almost doubling to £580/t ex-farm currently from year-ago levels, which has further fuelled interest in planting the crop this summer.

The Dekalb survey found that 33% of growers reported their crops established better than in 2020, and 28% slightly better, making 61% who saw an improvement compared with just over 40% in the previous season, while only 11% had a worse start, with the remainder about the same.

The reasons for this are unclear, but undoubtably earlier drilling allows oilseed rape crops to establish well, and then they are more likely to resist flea beetle pressure when the main flea beetle migration period starts at the end of August.

Mr Williams reports that flea beetle pressure increased through the main drilling window, with those growers in the North and West faring better, although many in the hot spots of eastern England saw less damage than in previous years.

There has been a clear trend away from the traditional drilling “sweet spot” of the third week in August towards the first week in August, and even into late July.

“Typically, we are seeing that once growers get their winter barley harvested, they are then keen to get in with oilseed rape, fuelled by the high price for the crop,” says Mr Williams.

In areas such as eastern England and the East Midlands, which were the worst hit by flea beetles in previous years, some 30% of growers had drilled their crops on or before 7 August.

Those early-drilling growers tended to favour hybrid varieties over conventional ones to take advantage of their good vigour and strong early growth.

This shows a change from when hybrids were used in the late-drilling slot to catch up quickly with earlier-drilled crops.

“The majority of early-drilling growers seem to prefer hybrids for their early vigour,” says Mr Williams.

Most growers are using direct-drilling or strip tillage to establish crops quickly, but more importantly to preserve soil  moisture at an often dry time of the year. More than 80% of growers were actively looking to minimise tillage.

“The best method seemed to be with a direct-drill, when the seed is given a decent coverage of soil, but not too deep,” he says.

In the absence of any real flea beetle challenge, companion cropping, double rolling and organic manure delivered slightly better establishment than the average.

Following drilling, almost one-third of growers says they avoided using an insecticide against flea beetles as they are looking to encourage natural predators. Altogether, only 45% used an insecticide, and the vast majority only used one spray.

Mr Williams adds that good establishment brings its own problems in terms of big crops in the spring, but hopefully there will be a reduced threat from serious flea beetle larval damage in the spring.