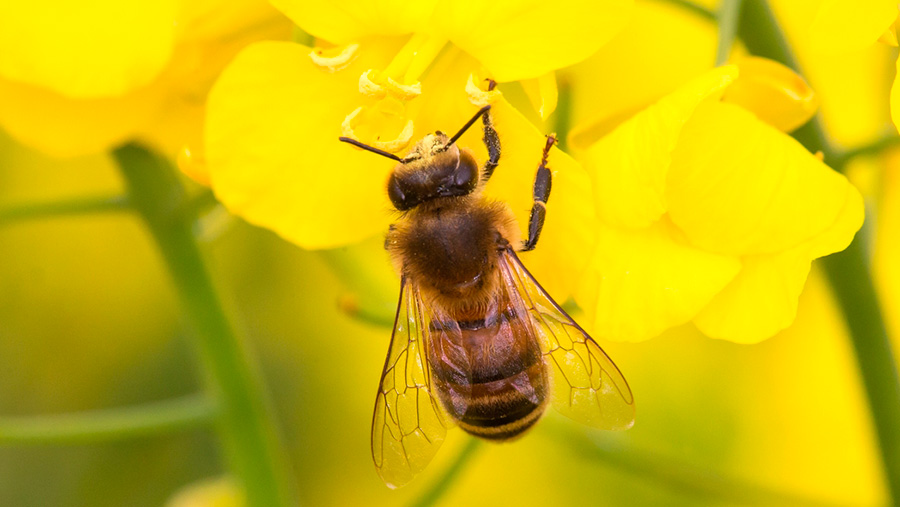 Research has found that two neonicotinoid pesticides may damage bee fertility – a possible explanation for the decline in bee populations.

A study by researchers at the University of Bern in Switzerland discovered two banned neonicotinoid insecticides – clothianidin and thiamethoxam – inadvertently act as contraceptives.

For the study, male honeybees, or drones, were obtained from colonies exposed to food laced with neonicotinoid pesticides and the bees were then kept in laboratory cages until they reached sexual maturity.

Data showed male bees exposed to neonicotinoids had 39% fewer living sperm than those that were fed clean pollen. The study also showed neonicotinoids cut their lifespan by one-third.

The level of pesticides the bees were exposed to was similar to those in neonictoinoid-treated fields.

Researchers said the results of the study provided a “possible mechanism” for the collapse in honeybee queen failure, in addition to other parasites and land-use changes.

“Our research further highlights the urgent need for thorough investigations of possible unintended effects of agricultural insecticides on male insect reproductive traits,” said the report, published in the journal Proceedings of the Royal Society B.

An EU-wide ban on the use of neonicotinoids on flowering crops such as oilseed rape, sunflowers and barley was introduced by the European Commission in December 2013 after their use was linked to a decline in bee health.

The NFU disputes the assertion that neonicotinoids kill bees and it has repeatedly called for more real-life studies to assess the effect of these pesticides on bee populations in the field.

The union says it is widely accepted that there are many factors contributing to a decline in bee numbers, including pests and diseases, loss of habitats and climate changes.

NFU chief horticulture adviser Chris Hartfield said: “We already know doses of neonicotinoids can have harmful sub-lethal impacts on bees – so it is not surprising that when you give honeybees food laced with neonicotinoids, it can affect their reproduction. “This research is interesting, but it doesn’t show these impacts are occurring under natural field situations and it doesn’t show neonicotinoid use is causing widespread declines in pollinator populations. “Until these major gaps in our understanding are filled, the evidence is still not conclusive enough to provide clear guidance for policymakers.”

Friends of the Earth bee campaigner Dave Timms described the study as “interesting” and he called for more studies to help understand the effect of neonicotinoids on all bee species and other invertebrates such as butterflies.

“But while the science must continue the politicians already have the clear evidence they need,” he added.

“The UK government must make it clear that no matter how much the pesticide firms lobby for their widespread return, these chemicals will be kept out of Britain’s fields.”