Suffolk grower Steven Offord is set to increase his oilseed rape area by 10% this summer, even if he can’t use a neonicotinoid seed dressing to fight off dreaded cabbage stem flea beetle attacks.

He is currently growing neonic-treated and untreated crops, which both took a pounding from flea beetles. Untreated crops looked particularly bad, but by this spring have recovered.

Although his farm is in a hotspot area for flea beetle damage, Mr Offord is “cautiously optimistic” about the prospects for the crop and will not be using neonicotinoids at all if the seed treatments are unavailable to him next season.

“If we don’t get to use neonic seed treatments this autumn, I will home-save seed to reduce costs. While I can get good yields, I can dilute my costs and it will remain a viable crop,” he says.

Back in October, Farmers Weekly visited the 500ha farm Mr Offord manages near Stowmarket, to see the shocking contrast in pest damage between two fields drilled within a day of each other in late August.

The only difference between the fields, aside from being different varieties, was that one was drilled with a Cruiser (thiamethoxam) neonicotinoid-dressed seed, while the other was undressed. 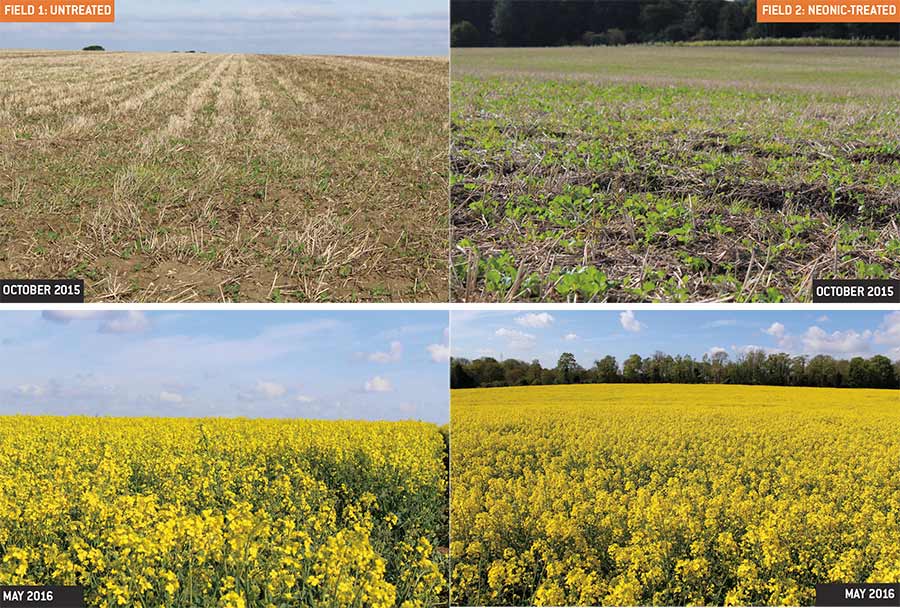 An emergency application to use neonicotinoid seed dressings was approved last July, but only for 5% of the UK crop area and only for use in the flea beetle hotspot counties of Bedfordshire, Cambridgeshire, Hertfordshire and Suffolk.

The farm grows 100ha of oilseed rape, with Cruiser-treated Nikita and Picto treated with another neonic, Modesto (clothianidin), making up 60% of the area. The rest is planted with untreated hybrid V316 OL.

Last October, Mr Offord described the difference in flea beetle damage between seed-treated and untreated crops as “like night and day”, adding he had never seen pest pressure so high in 20 years of growing rapeseed.

“It did look apocalyptic in the autumn, with the untreated crop looking thin. I am now cautiously optimistic and pleasantly surprised. Proportionally, now the plants are growing away, there is looking to be less damage, but I’m not getting complacent by any means,” he says.

Thankfully, the high numbers of flea beetles in autumn did not translate into severe levels of larvae damage this spring, although there is some evidence of damage, particularly on the untreated crop.

His primary concern now is that flea beetle larvae damage will provide an entry point for sclerotinia, something Mr Offord has already sprayed for once and is expecting to repeat before flowering ends.

Farmers Weekly will be catching up with Steven Offord at harvest to find out how the neonic-treated and untreated oilseed rape yields compare. In the meantime, you can follow Mr Offord on Twitter @stevenofford1
See more
Share this
Advertisements