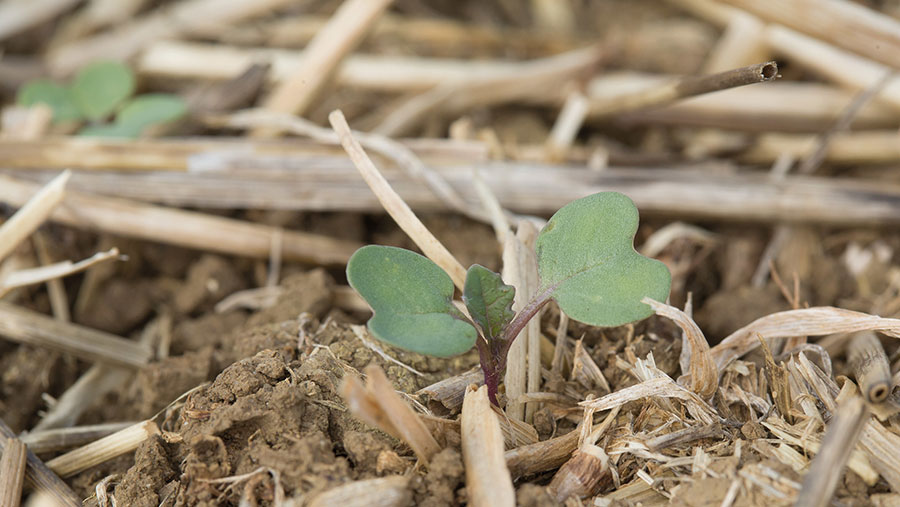 Oilseed rape is down but not out, according to a Farmers Weekly survey of farmers looking at rotations and the break crop’s future.

Although 22% of farmers who have previously grown oilseed rape had already decided not to grow it for harvest 2021, more than half of almost 300 survey respondents said they remain committed to the break crop.

That is despite the area of oilseed rape falling by 20% to a 16-year low in the past few years, as the crop struggled to establish successfully in dry conditions and withstand a sustained attack from cabbage stem flea beetle.

Of those survey respondents growing the crop again this year, one-third have reduced the area they are devoting to OSR, but 30% reported no change.

The Farmers Weekly oilseed rape survey was carried out in August 2020 and had 299 respondents, representing all areas of the UK.

The average farm size was 510ha and the average area of oilseed rape grown was 93ha.

To increase their chances of success with oilseed rape and reduce some of the recognised risks, those growers sticking with the crop said they would be changing the way they grow and manage it.

The main changes include waiting to apply herbicides until the crop has established successfully, bringing the drilling date forward to early August to avoid the main flea beetle migration period, and placing fertiliser with the seed at drilling.

Other changes include selecting of fast-developing hybrid varieties and using higher seed rates.

Adopting a different establishment system and widening the rotation were also mentioned, as was the use of farm-saved seed to keep costs down and companion cropping for diversity and nutrient recycling.

Larger farms have been more likely to cut back the amount of oilseed rape grown, as they look to rebalance the risk/reward equation and get as much winter wheat into the ground as possible.

Given the weather difficulties encountered during the 2019-20 cropping year, the survey participants had clear intentions of how they would react this season to get their rotations back on track.

Almost half (47%) plan to grow more winter wheat for 2020-21, reflecting its place at the top of the gross margin table and ability to create the highest financial returns.

Not surprisingly, one-quarter of those surveyed intend to reduce the area of spring cropping on their farms. Cutting the amount of OSR being grown was mentioned by 27%.

A reluctance to spend money on herbicides until the crop has established successfully was the main management difference mentioned in the survey, with 39% planning to wait before making spray applications.

As 2019 was the first year growers had a choice with herbicide approaches and timings (apart from the Clearfield system), there is already an emerging trend to spend less on pre-emergence treatments.

Blackgrass and charlock were marked as the biggest weed pressures in our survey, with cleavers and mayweed also being highlighted as problems.

Other planned changes include growing more pulse crops, lengthening rotations and introducing stewardship options – the latter showing that growers are taking steps to develop guaranteed income streams as the BPS starts to reduce.

Some 11% will be making no changes to their existing rotations, having avoided the worst of the extreme weather and met fewer challenges during the year.

When asked about the main challenges of growing oilseed rape, cabbage stem flea beetle pressure was mentioned by an overwhelming 85% of those surveyed.

Without neonicotinoid seed treatments or an alternative means of control, flea beetle damage has created enormous difficulties for growers – not just from adults feeding at the establishment stage, but also from larval damage later in the season.

Other pests, such as slugs and pigeons, were also high on the list of challenges, as was the lack of soil moisture at drilling.

The falling financial returns from oilseed rape were highlighted, with high growing costs and reduced profitability coming in fourth and fifth place. The increasing risk and poor yields associated with the crop came next.

Just 3% of the survey respondents claimed to have no challenges associated with growing oilseed rape.

Given the challenges identified in the survey, the introduction of effective flea beetle control measures would convince 83% of our growers to include oilseed rape in the rotation again.

In the same vein, pest-resistant or -tolerant varieties – or those exhibiting greater vigour – would also be welcomed.

A higher commodity price and an early harvest were other factors that would persuade growers to reconsider oilseed rape.

Farmers Weekly had full editorial control of this article. Thanks to Corteva for its sponsorship, which made this survey possible.

Corteva Agriscience is delighted to sponsor OSR Future, a series following the progress of the 2020-21 oilseed rape crop and exploring how farmers are changing the way that they grow the crop.

As farming changes post-Brexit, so too do the opportunities and threats for break crops such as oilseed rape. Challenges will be overcome by new thinking, open minds and innovation, allowing new strategies to emerge.

With proven crop protection products – such as Astrokerb and Kerb Flo 500 – and innovations such as post-emergence herbicide Belkar, farmers will be equipped with the tools they need. Plant breeding excellence from Pioneer will continue, with varieties following the path laid by favourites PT256, PT275 and PT279CL