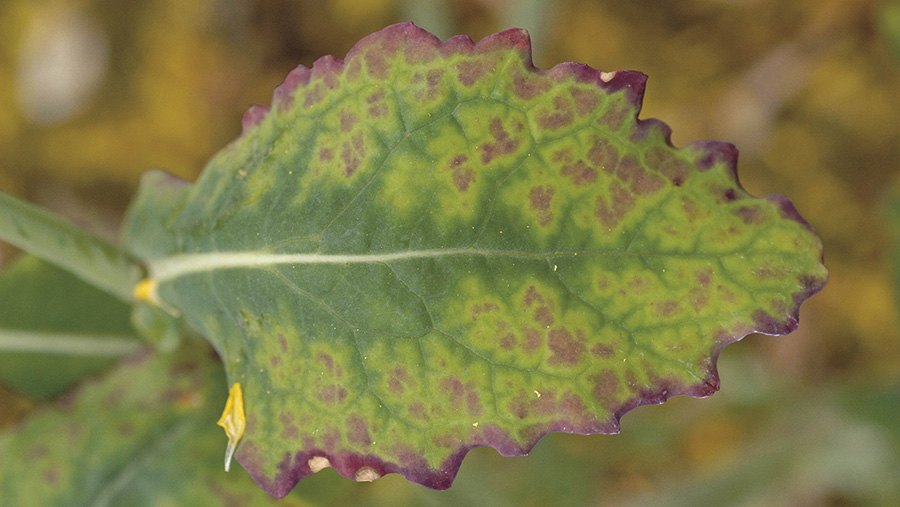 Turnip yellows virus (TuYV) is now a major threat to oilseed rape yields and growers need to carefully monitor crops this autumn for its aphid vector and respond with an insecticide if present.

Predominantly carried and spread by the peach potato aphid (Myzus persicae), the presence of TuYV in crops can be betrayed by a number of symptoms.

See also: Learn more about beating the disease with our turnip yellows academy

From the same family as cereal disease barley yellow dwarf virus, it causes stunted plants, resulting in up to 30% yield loss and is estimated to cost the industry between £67m-£180m each year.

University of Warwick’s John Walsh says TuYV is a “hidden problem”, with growers often unaware crops are infected as it occurs across fields and can be attributed to problems such as nutrient deficiency.

“It’s often very evenly spread and our research has found that 100% of sampled plants can be infected across a field in some years,” he explains.

Prof Walsh adds the virus is also prevalent throughout the UK, from Cornwall to the north of Scotland, with hotspots in Humber, Lincolnshire, Suffolk and Kent.

The virus can be hosted by more than 150 separate plants species in 20 plant families, including common arable weeds such as shepherd’s purse, fumitory, mayweed, groundsel and chickweed, to name but a few.

Combine this with the prevalence of Myzus aphids in the UK, of which an estimated 60-80% of the population carry TuYV for life, the virus reservoir and infection efficiency is huge.

Neonicotinoid insecticide seed treatments provided growers with about 85% reduction in aphids when the crop is at its most vulnerable stage, significantly reducing virus spread.

They have now been banned, however, and leave just foliar insecticides for direct control and with Myzus 100% resistant to pyrethroids, only Plenum (pymetrozine) and Biscaya (thiacloprid) provide effective and approved options.

Myzus has two main migration periods, one in the summer that peaks around June and the other in autumn from mid-September onwards, which can last until November in an open season.

She explains although there is no model to make a scientific prediction that risk will be increased, summer aphid counts were high.

Therefore, logic would say a higher risk may be the case and vigilance will be required against the pest this autumn.

“Those aphids have got to go somewhere.

“We can’t be sure of the risk to oilseed rape, but it is definitely something to keep an eye on as crops begin to emerge,” says Dr Collins.

Syngenta field technical specialist Max Newbert says conditions over coming weeks will have a major influence on the level of risk from the pest and the virus it carries.

“It could be low if it becomes wet and windy, but if conditions are favourable, there could be a lot around.

“It is very hard to time sprays and it will require a lot of hard work.

“Growers and agronomists will have to keep an eye on crops, Rothamsted Research aphid bulletins and also have the option of yellow water traps in the field,” he explains.

In addition to these monitoring measures, there is also a Warwick Myzus online bulletin that shows the proportion of aphids carrying TuYV this season.

Dr Newbert adds sprays such as Plenum need to be applied just before peak migration.

“It is all about autumn infection with turnip yellows virus, as the earlier it occurs the greater the yield loss, so timing is critical.”

University of Warwick’s John Walsh believes varietal resistance will be the best means of reducing its impact in the future as chemical options come under increased pressure.

Breeder Limagrain brought Amalie – the first commercial variety with turnip yellows resistance – to the market in 2014-15 and the variety can provide a 30% yield increase in the presence of the virus compared with non-resistant types.

On top of Amalie, Prof Walsh says an ongoing Biotechnology and Biological Sciences Research Council-funded project at Warwick has identified other genetic sources of resistance.

Researchers are now working with breeders to introduce them into commercial varieties, which should make market within the next 10 years.

“One positive is that we have looked at virus strains across the UK and Europe and the resistance seems to be effective against all the strains out there.

“Unlike plant resistances to fungi, which are often boom and bust, this looks to be more durable.”