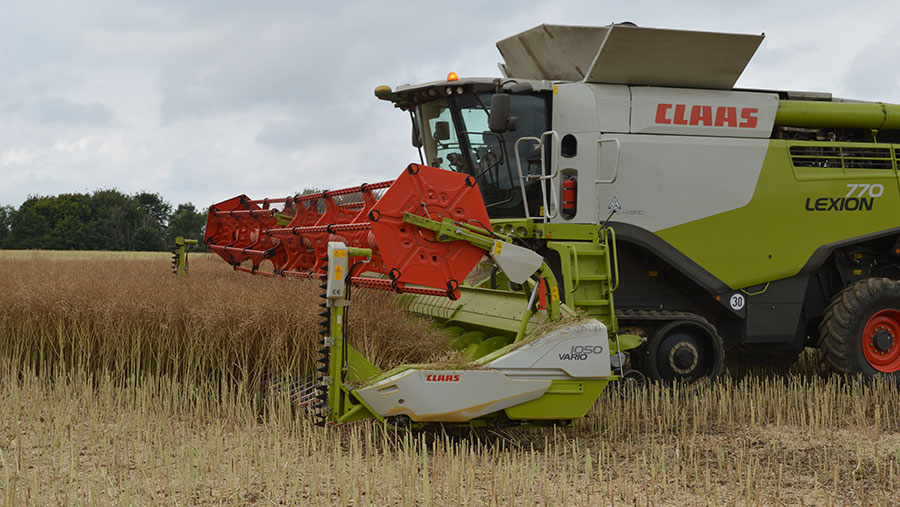 Mr Smart’s crop yielded 6.4t/ha on his silty clay soils over limestone, just below the world yield record of 6.7t/ha, using the variety Harnas grown after winter barley and applying 280kg/ha of nitrogen.

His winning formula included chosing the right variety, getting good establishment in the autumn and not producing too large a crop canopy, he added.

“We tried to push the crop hard in the spring. The canopy was very even and a dream to combine,” he said after winning the gold award for oilseed rape yields in Adas’s Yield Enhancement Network (YEN).

Yorkshire grower Stephen Tuer won the silver award with a yield of 6.3t/ha on his farm near Scotch Corner, and said some of the secret was the history of a dairy unit on the farm and access to pig slurry.

His crop went through the winter at just 12 plants/sq m, rather than the 20-30 often recommended, and the resulting yield showed the remarkable ability of the crop to recover.

The bronze award went to Tim Lamyman’s 5.7t/ha crop in Lincolnshire which saw a near perfect establishment in the autumn and looked good until three to four weeks before harvest when it suffered from summer rain and a lack of sun.

Mr Smart and Mr Tuer picked up the gold and silver for the best potential yields, with Oxfordshire grower James Price awarded the bronze for achieving 48% of his potential 7.9t/ha on his thin light Cotswold limestone brash soil.

He has been busy building organic matter using compost on his farm near Woodstock, and applied a relatively modest nitrogen rate of 170kg/ha to achieve a 3.8t/ha yield, but his crop suffered in the early summer heatwave.

“The crop burned off in June when the crop went from green to white and we had to cut early,” he said.

The crops senecenced about two weeks earlier than normal last summer due to the June heatwave, and this was a main factor in limiting seed fill and hence overall yield.

He sees the oilseed rape crop having a potential yield of 12t/ha with better varieties and better growing techniques, and said the key to moving towards this aim was to get enough seeds/sq m and then filling those seeds.

“The two crops we saw over 6t/ha both had high seeds/sq m and high thousand grain weights,” he said.

Dr Berry pointed out crops with more than 100,000 seeds /sq m tend to achieve yield of more than 5.4t/ha and those below will have lower yields.

In the first year the YEN competition was extending to oilseed rape, Adas received 50 entrants with an average yield of 5.24t/ha.

Dr Berry’s conclusions from the 2017 season were: