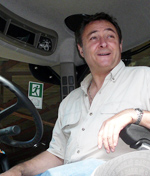 “They’re very concerned about the consequences. But the fashion of filling streets with angry farmers seems to be fading, so we’re not seeing a very strong reaction.

“The new regulation will be made worse by our own new laws released after the ‘Grenelle de l’environnement‘.”

This recent negotiation between consumers, government, food industry, retailers and producers has produced another list of “undesired” chemicals, he explains.

Depending on the type of farmer there are two main reactions.

“Those proud to help ‘feed the world’ are angry because they fear huge production cuts, though it seems no studies have been done to assess by just how much.

“Indeed, the problem with our politicians is that they don’t link pesticide use to production. They believe we spray chemicals just to maintain our friendship with chemical manufacturers.”

However, Mr Renaudat says some farmers think they would be better off.

“Should society really be organising shortages like this? That’s crazy, isn’t it?

“We haven’t heard much against these new regulations from our main farm unions. But according a smaller one it seems that lighter CAP reform has been exchanged for farmers accepting the chemical limitation.”

“But I’m sorry to tell you that in Germany the topic is something of an insider debate.”

The German farmers’ union believes in fighting for a pesticide approval scheme. But the government’s agricultural advisory boards have been stopped by the minister of agriculture from pushing the farming view because the consumers’ is seen as more important, says Mr Schintling-Horny.

“We have elections in Bavaria in September.

“The German agricultural press doesn’t believe the problem is as big as forecast by the pesticide industry.” That’s mainly because approved products wouldn’t be banned immediately, but could be used for up to 10 years depending on approval and expiry dates, he explains.

Many still permitted in the UK have long been removed from the German market, he adds.

“So we’ll ‘lose’ fewer pesticides than other countries. But wheat, rape and sugar beet farmers, with an effective lobby, will be less affected than those growing vegetable and fruit.”

Lars Joergensen firmly maintains that pesticides tested and approved at recommended doses should continue to be used in Denmark.

“I don’t understand the idea of forbidding pesticides proved not to be harmful,” he says.

Mr Joergensen says the impact of pesticides, compared to using less or no chemical input, must be evaluated on a whole cost/benefit basis. “In other words what is the environmental cost of different production methods per kg of crop yield?

“Which is better for nature? A combination of very intensive farming with some unfarmed nature reserves or, for the same yield, a bigger area farmed less intensively combined with almost no reserved land?”

“Like many in this part of the world, we are major users of older off-patent active ingredients as they tend to be very cost-effective.

“We’re trying to reduce our cost per hectare all the time as it’s difficult to improve our yields through additional inputs due to climatic conditions.

“There has been very little publicity about these removals, and farmers are only just starting to realise the impact on production costs.”